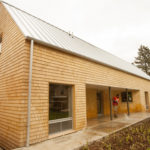 It’s not easy to build a home that meets the highly demanding criteria for official architectural sustainability designations.

But Connor Rollins, a 2015 Kansas University master’s of architecture grad, hopes homes that do make the cut — like the “passive” house he and colleagues from KU’s Studio 804 class just completed in East Lawrence — can at least be inspirational.

Even “little things here and there” can reduce the energy a home uses, he said, from making walls a little bit thicker to choosing energy-rated appliances.

The interior is light and bright, with soaring loft ceilings over the living room and open-concept kitchen, sleek built-in drawers in all bedrooms and a handicap accessible bedroom suite with roll-in shower on the first floor. A detached one-car garage also will house an above-ground storm shelter, as the house has a crawl space instead of a basement. The side yard is full of native plants instead of grass and will serve as a bioswale to filter storm water runoff naturally.

The house is described as net-zero because it can provide for all of its energy on-site, according to a description from the School of Architecture. Enough electricity is produced by a 4-kilowatt system of photovoltaic panels to offset the house’s electrical loads, although the amount of energy required is dramatically reduced through the house’s many energy efficient features.

Studio 804 — a class, with an associated not-for-profit corporation, in which students design and build a building themselves from the ground up — has constructed nearly 20 homes and other buildings through the years.

“This is really the very finest in terms of its efficiency,” said Dan Rockhill, professor of architecture and executive director of Studio 804. “I think it’s important in my capacity through the university to continue the conversation … that there are alternatives to conventional building.”

Rockhill said he expects the house to receive its official passive certification from the Passive House Institute U.S. It was also designed to meet standards of the U.S. Green Building Council’s Leadership in Energy and Environmental Design (LEED) program and the International Living Future Institute’s Living Building Challenge.

There’s a public open house planned for Saturday, but not to sell the house.

Rockhill said the house is already spoken for, and the buyer is expected to close and move in within weeks.