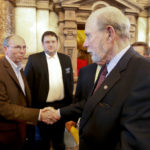 Kansas Sen. Les Donovan, R-Wichita, the chair of the Senate Assessment and Taxation Committee, right, shakes hands with Rep. Marvin Kleeb, R-Overland Park, the chair of the House Standing Committee on Taxation, after the Kansas Senate passed a tax bill marking the biggest tax increase in Kansas history, at the Kansas Statehouse in Topeka, Kan. on Friday, June 12, 2015. (Chris Neal/Topeka Capital-Journal via AP)

Kansas lawmakers adjourned the 2015 session Friday after passing a tax package that still falls short of fully funding the state’s budget for the fiscal year that begins July 1.

The bill relies heavily on increased sales and cigarette taxes to generate about $384 million in new revenues, and it still requires Republican Gov. Sam Brownback to cut about $50 million in spending out of the budget that passed the House and Senate earlier this month.

It does not, however, reverse course on any of Brownback’s policies of phasing out income taxes over time and exempting certain business owners from paying any income tax at all.

Brownback had threatened to veto any tax bill that contained an income tax on business owners, even though as recently as Thursday his administration alluded to the possibility of having to zero out all state funding for public universities if the Legislature didn’t pass an adequate tax bill he would sign.

The final tax package actually was contained in a pair of bills, which Friday passed both chambers with the bare minimum number of votes needed, 63 in the House and 21 in the Senate. All of the “yes” votes came from Republicans, and many of them called it a deeply flawed bill, but probably the only one that could pass the politically fractured Legislature.

“It’s a Band-Aid approach to a budget,” said Sen. Jeff Longbine, R-Emporia. “It’s got fluff in it. It’s got additional funding cuts, and it’s got a low ending balance.”

Sen. Tom Holland, D-Baldwin City, said the projected ending balance of $86 million at the end of the fiscal year was probably inaccurate because it’s doubtful that some of the provisions in the bill will actually produce the revenue that’s expected, and it still relies on Brownback making additional cuts to the budget.

“It really brings into question, in my mind, the whole validity of this plan,” he said.

In a caucus meeting before the Senate vote, some Republicans were already expressing concerns about the political fallout of passing the bill, which is being called “the largest tax increase in state history.”

“How do we message to our constituents that this is an adjustment to (the income tax cuts of 2012),” Longbine asked GOP leaders.

“It does require quite a bit of education,” said Senate Majority Leader Terry Bruce, of Hutchinson. “We can do that, of course, with newsletters and emails and what have you.”

Taken together with the income tax cuts of 2012 and 2013, legislative research officials said this year’s tax increases still represent a net reduction in taxes. Those income tax cuts, researchers said, are now estimated to be reducing state revenues by roughly $1 billion a year, while the increases included in this year’s bill will add $384 million in revenue for the next fiscal year, $405 million the following year and $545 million the year after that.

The bill also includes provisions aimed at softening the blow of the higher sales tax, such as exempting about 388,000 low-income individuals and families from income tax, and a kind of property tax lid on cities and counties, beginning in 2018, which Republicans say will prevent homeowners from experiencing large property tax increases in future years.

Meanwhile, many Republicans said negotiators surrendered a good issue to Democrats when they agreed to a House demand to drop a proposed reduction in the sales tax levied on food.

“Pulling that off, I can tell you what the Democrats are going to do next year. They’re going to one-up us,” said Sen. Ralph Ostmeyer, R-Grinnell. “And we’re all going to be tied into voting for something that Republicans are never going to get the credit for.”

The food sales tax provision originally was offered in the Senate by Lawrence Democrat Marci Francisco. But Ostmeyer noted that Democrats were locked into voting “no” in the final vote on the entire package, so Republicans could have claimed all the credit for it.

House negotiators, however, insisted on dropping that provision from the final package this year and agreeing to look at it in tax committees during the 2016 session.

Senate tax committee chairman Les Donovan, of Wichita, assured Republicans he would hold hearings on it next year, which is also an election year. But others questioned whether the state would be able to afford a food sales tax cut, given how tight the state’s fiscal condition is expected to be.

Passage of the tax bill also fulfills one of Gov. Brownback’s long-term goals, which is to shift the state toward more reliance on “consumption” taxes, such as the sales tax and excise taxes on tobacco and other items, and away from income taxes, which he calls a “tax on productivity.”

“We should only tax consumption,” said Sen. Steve Fitzgerald, R-Leavenworth. “If you don’t want to pay the tax, don’t buy the item.”

“And now we’re asking poor people to pay more to keep a misguided and reckless tax policy in place,” he said.

Sen. Ty Masterson, R-Andover, defended the policy of exempting business income, saying it incentivizes people to start new businesses. And he disagreed that it was unfair to wage earners who are employed by those businesses.

“The truth is, it’s available to everybody willing to participate in the activity being incentivized: small business,” Masterson said. “That secretary that everybody’s talking about, she could start a restaurant or a nail salon — that sounds sexist. She could start an automotive shop. Whatever it is she plans to start for her own small business. And that tax regulation is available to her.”

Friday was the 113th day of the legislative session, a new Kansas record. The previous record, 107 days, was set in 2007. Each additional day beyond the planned 90 days costs the state about $43,000.

Sales tax: Increases state tax rate to 6.5 percent starting July 1, a change of more than one-third of a cent. ($164.2 million)

Income tax rates: Delays scheduled cuts in tax rates until 2018 and 2019, and changes the formula, commonly known as the “march to zero,” that is used for calculating future income tax rates after that, based on growth in state revenue. ($26.4 million)

Tax amnesty: Provides a tax amnesty period from Sept. 1 to Oct. 15, allowing the state to waive interest and penalties for people who pay up their delinquent tax accounts. ($30 million)

Tax credit limitations: Requires any taxpayer claiming an income tax credit to have a valid Social Security number for the entire year in which the credit is claimed. ($3 million)

Local property tax lid: Beginning in 2018, cities and counties would have to have a public vote before they could increase property tax revenues by more than the rate of inflation, except for certain purposes.

Douglas County sales tax: Authorizes Douglas County to put a half-cent sales tax on a ballot for voter approval to fund expansion of the county jail.