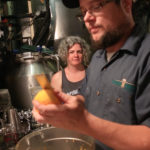 Steve Jones collects some orange zest for a special batch of beer at Free State Brewery. Steve’s wife, Cathy Jones, is a graduate of Lawrence High School. The couple now own their own brewery in Fort Collins, Colo., and teamed up with Free State Brewery to create a craft beer in honor of Cathy’s LHS 20-year class reunion. The new beer will be called “Lion’s Pride.”

Lawrence High School alumni will soon have a new brew to commemorate their glory days. Aptly named “Lion’s Pride,” the new beer coming out late this summer is the brainchild of a collaboration between Free State Brewery and Pateros Creek Brewing Company, of Fort Collins, Colo.

When Lawrence-born Cathy Jones and husband Steve Jones, owners of Pateros Creek, learned of Cathy’s upcoming 20-year LHS reunion in July, they wanted to share Cathy’s beer with her old classmates. But Kansas brewing laws prevent her from bringing the Pateros Creek beer to the state.

“Because we don’t distribute here, we can’t bring beer here,” Cathy Jones said. “So we thought, ‘Maybe we can work around this.'”

That’s when she asked Free State Brewery, 636 Massachusetts St., if it would be willing to concoct a new drink to celebrate the class of 1995.

When they met Free State’s head of downtown brewing, Geoff Deman, it was as if the collaboration was meant to be. Deman’s girlfriend, Ashley, went to the same Fort Collins high school as Steve Jones, and Deman and Cathy Jones both went to LHS, Deman said. What’s more, Ashley’s mother had recently spoken at a “Science on Tap” event at Pateros Creek — the same kind of event Free State hosts about once a month.

“We’re selective when we do collaborations,” Deman said. “But Pateros Creek is so cool and the story of all the connections between us.”

Deman said Free State collaborations are “pretty rare,” the Lion’s Pride project being only the fifth or sixth collaboration the 26-year-old brewery has done.

Deman and the Joneses hope the product will be well received by Chesty Lions and Firebirds alike. Deman said the brew — it took months of emails between Steve Jones and Deman to decide on the recipe — will be an American wheat with a lighter, crisper finish with notes of citrus.

“We wanted something with a large appeal, and Pateros Creek focuses on ‘leisure beers’ – not really heavy beers,” Deman said. “They’re ‘sessionable,’ meaning you could have many in one session.”

The brewing began Thursday morning, about four hours after the Colorado couple’s flight came in at 4 a.m. As they started the process of “mashing,” or heating the grains in water, Deman played a CD of all songs from 1995, beginning with “Wonderwall” by the English rock band Oasis.

Deman and the Joneses are using strains of yeast and hops on the collaborative beer that had never been used by Free State before. This particular yeast strain, Deman said, has hints of apricot, so the brewers will also add some citrus zest to the boil to enhance the flavor.

The beer-making process is not a quick one. The concoction takes 6 and a half hours to brew, then “several days” of fermentation, Deman said. After that, the beer will be processed for weeks and be made available by the 1995 LHS class reunion, which is set for the weekend of July 24.

Though they haven’t actually tasted the beer yet, Deman said he has a “pretty good idea of how it’s going to turn out.” Deman said that those who like Boulevard Wheat beer will enjoy Lion’s Pride.

Deman said he hopes to reach out to “local hangouts” in the coming weeks to offer Lion’s Pride to vendors so that, Lion or not, Lawrence beer lovers will be able to try the new creation.

Deman said Lion’s Pride will be out for just a limited release but that Free State may consider bringing it back next year, depending on its reception in July.