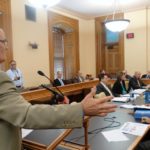 Topeka ? On a party-line vote, the Kansas Legislative Post Audit Committee on Wednesday declined to order an audit of the Kansas foster care system, despite the recent deaths of children who were either in state custody or in troubled homes.

But the panel did agree to put the audit request on a waiting list, which means it could be authorized later this year or sometime after lawmakers reconvene in January for the 2016 session.

The decision came at a time when the Department of Children and Families, which manages the foster care program, is coming under increased public scrutiny because of the near-record number of children currently in the system and because of continuing reports that the agency is preparing for major policy changes that could include barring gay and unwed couples from becoming foster parents.

The request for an audit of the program came from two south-central Kansas legislators, Reps. Jim Ward of Wichita and Ed Trimmer of Winfield, both Democrats. They represent regions where two high-profile cases of children dying while in foster care have occurred.

“In the last couple of years, I’ve been getting more and more and more concerns presented to me about supervision not being done, placements being changed fairly radically quickly, and care plans not being followed through with,” Ward told the committee.

“Not just by people whose children are involved in these cases, where you always have a high level of complaint,” he said, “but by providers and people who have worked the system, both inside the agency and outside the agency that have a lot of interaction with the cases, with the children, with the families.”

One of the recent deaths occurred in July 2014: A 10-month-old girl in El Dorado died when her foster father left her in a hot car while he was smoking marijuana in the home of his drug dealer. He later pleaded guilty to involuntary manslaughter.

And in December, a 10-year-old boy in Wellington was stabbed to death by his mother, a woman who reportedly had struggled with bipolar disorder. Trimmer said he believed that was a case in which child welfare officials should have known about potential danger to the boy’s welfare.

“These are the most vulnerable, the weakest, and they have (been) victims,” Ward told the committee. “Remember, these children have already gone through crisis in their family. They’ve been physically abused, sexually abused, emotionally abused, or grossly neglected, or we wouldn’t be talking about them being in foster care.”

Ward and Trimmer asked for an audit to look into two questions: whether DCF’s removal and reunification processes are adequate to ensure children’s safety and whether foster care contractors have sufficient capacity to provide necessary care.

Governmental auditing in Kansas is done by the Legislative Division of Post Audit, an agency within the legislative branch of government. It works under the direction of the Post Audit Committee and has no independent authority to conduct audits unless they are approved by the committee.

Republicans on the panel voted against launching an audit immediately, in part, they said, because the Department of Children and Families is already conducting its own review of the foster care system, including the qualifications it requires of foster parents.

They also noted that an interim legislative committee will hold hearings this fall to review the foster care system and the qualifications it requires of foster parents.

Sen. Julia Lynn, R-Olathe, said DCF should not be the target of investigation because decisions about placing children in state custody are made by judges.

“I am not quite sure that we’re at the point where this particular scope statement is ready to go forward because there are extraneous issues involved that are bigger than DCF,” she said.

Rep. Peggy Mast, R-Shawnee, said there have been numerous audits in the past of the state foster care system, and none has resulted in significant changes.

“It would be a lesson in futility,” she said. “I don’t know what the answer is, but I don’t think this is going to reveal anything that’s going to be substantive enough (to justify putting it ahead of other scheduled audits).”

Trimmer said after the meeting that he was disappointed the committee did not approve the audit. He said he would try again in December when the Post Audit Committee meets again to set a schedule for audits next year.

“I think there was reluctance by Republicans on the committee to look at any agencies in the current administration,” Trimmer said.

Earlier this month, Douglas County District Judge Peggy Carr Kittel wrote to DCF, expressing concern about rumors she has heard that the agency is planning to change its policies so that only married couples can be licensed as foster parents, a move that could exclude single individuals or cohabiting couples. Others have suggested the agency is considering barring gay couples from being foster parents.

DCF spokeswoman Theresa Freed said the agency is reviewing all of its foster care policies to determine if they are sufficient to ensure the safety of children. But she has not said whether the agency is considering a change to limit the program only to married couples.