The GOP state committee held its annual midyear convention Saturday in Manhattan, mainly for the purpose of adopting rules for the caucuses.

But there was also plenty of talk about state legislative races next year, when both the House and Senate will be up for election. And there were rumors aplenty about who may or may not run for governor in 2018. 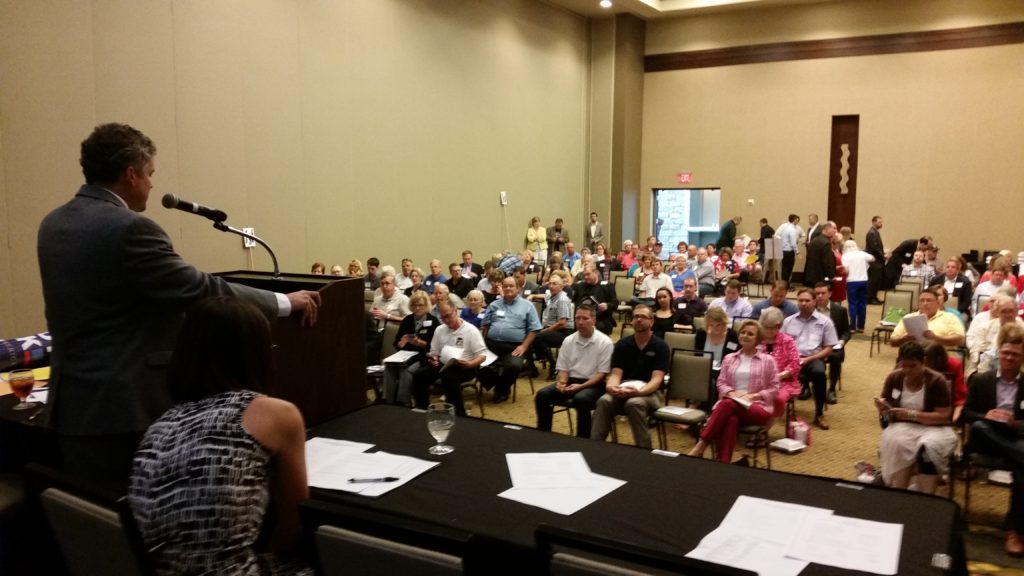 “We are not playing defense. We’re playing offense. We’re going after Democrats in their territory,” party chairman Kelly Arnold told more than 150 state committee members who gathered in Manhattan.

Kansas Republicans have enjoyed of three consecutive “clean-sweep” elections in which they won every statewide office, all U.S. House and Senate races, and gained seats in the Kansas Legislature. But some party officials said they’re now concerned GOP voters may not be as motivated next year as they have been in the past.

“What a lot of county chairs are seeing is that we’ve succeeded overwhelmingly in getting our agenda through since the 2010 election — people just aren’t quite as fired up as they were to storm the gates and take the state back,” GOP executive director Clayton Barker said.

In 2010, Republican Sam Brownback won the governor’s race, ending the Democrats’ eight-year hold on that office. And former state Rep. Kevin Yoder won an open race for the 3rd District congressional seat, replacing Democrat Dennis Moore, who had retired after 12 years in that office.

But less than a year after Brownback’s narrow re-election win last November, Republicans are already talking about who will run in 2018 for the nomination.

“There’s probably a short list of 15 people,” Arnold quipped when asked about the list of potential candidates.

Names that are consistently being rumored as possible candidates include Secretary of State Kris Kobach, Attorney General Derek Schmidt and Senate President Susan Wagle, of Wichita, as well as Yoder and 4th District Congressman Mike Pompeo.

But none of those people attended Saturday’s convention. In fact, there were no statewide elected officeholders or members of the state’s congressional delegation present.

Two of the most notable Republicans attending were Robba Moran, wife of U.S. Sen. Jerry Moran, who is up for re-election next year, and former Congressman Todd Tiahrt, of Wichita, who said he will not run again for another office.

Kansas lawmakers this year repealed a statute that had required both parties to hold primaries in presidential election years. But that statute was routinely waived, usually to save the cost of holding a primary.

The last presidential primary that was actually held in Kansas was in 1992, when Republicans endorsed then-President George H.W. Bush for re-election and Democrats voted to nominate Bill Clinton.

Currently, there are 16 declared candidates seeking the GOP nomination, but party officials think that field will be winnowed down considerably before the Kansas caucuses.

“Surely there won’t be 16 candidates,” said Kathleen Ammel, who chairs the Douglas County Republican Party. “Some will drop out, depending on how the debates go, before March rolls around.”

Ammel said Douglas County Republicans appear to be focused on some of the same candidates who are drawing national attention.

“Of course (Donald) Trump brings a lot of attention,” she said. “You hear a lot about Carly Fiorina, Jeb Bush, (Ben) Carson somewhat. So mostly the ones that are already the top 10 candidates are the ones being talked about.”

Party officials said they chose the March 5 date, a Saturday, out of hope that it will entice the remaining candidates at that time to campaign in Kansas and, more importantly, to spend money in Kansas to beef up the state party’s coffers.

It also happens to be the same date that Kansas Democrats will hold their caucuses.

“In the last two caucuses we have had, we’ve had a number of candidates come to Kansas on that Thursday and Friday to be able to meet with our Republicans, have events and share their message in Kansas,” Arnold said. “We’re no longer a fly-over state. And in the past, we’ve been a fly-over state.”

In adopting new rules for the presidential caucuses, the state party made a few changes in the rules from past practice, which they hope will make Kansas even more attractive to candidates.

Most importantly, Arnold said, the new rules allow for allocating the state’s delegates to the national convention proportionately and providing that a candidate only needs to get 10 percent of the vote in order to earn at least one delegate. In the last presidential race, candidates needed at least 20 percent.

“They’ll know, even if they’ve been placing third or fourth in some of these caucuses or primaries, they can come to Kansas and still pick up delegates,” Arnold said.

But Kansas is still far from a critical battleground for GOP candidates. Kansas Republicans will send 40 delegates to the GOP national convention in Cleveland, Ohio. It will take 1,144 delegates to win the party’s nomination.

Also, in recent presidential races, Kansas Republican caucus voters have shown themselves to be more conservative than the national party as a whole.