Topeka ? Gov. Sam Brownback on Friday said he’s concerned about the security of Kansas National Guard facilities in the wake of a mass shooting last week at a Naval Reserve base in Chattanooga, Tenn.

But he was not willing to discuss a review of the state’s permissive gun policy in the wake of other recent mass shootings in which civilians were killed, including one the day before at a movie theater in Lafayette, La., and the June 17 massacre at a historical African-American church in Charleston, S.C.

“What we are trying to do is take some steps over things we have direct control and operation over,” Brownback said. “As you know, Kansas is a pro-Second Amendment state. In this Legislature, in both bodies, a bipartisan (majority) have supported Second Amendment rights.”

Brownback initially called for a security review of National Guard facilities last week following the shooting in Chattanooga in which four Marines were killed before the shooter took his own life. One Navy sailor who also was shot died later at a hospital.

The shooting was carried out by Mohammad Youssef Abdulazeez, a naturalized citizen from Kuwait, but investigators have not yet determined a motive. 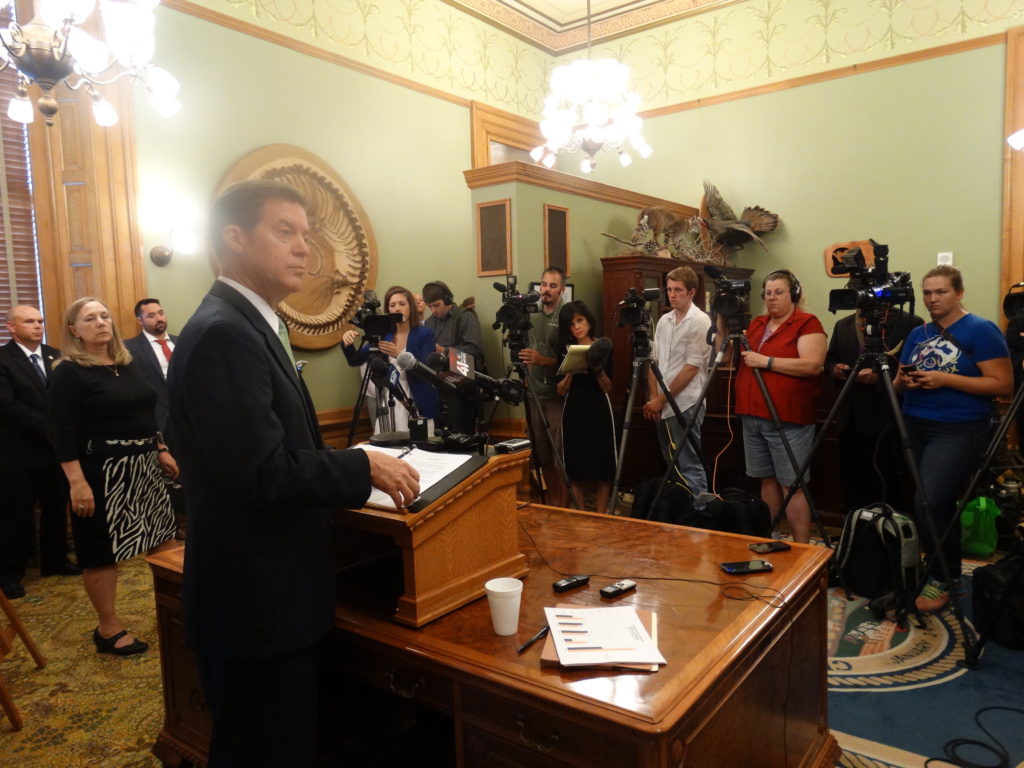 Gov. Sam Brownback responds to reporters' questions during a news conference Friday. Brownback discussed a wide range of issues, including abortion and his call to review security at National Guard facilities in the wake of a mass shooting in Chattanooga, Tenn.

That incident has drawn attention to the fact that military personnel are not allowed to carry weapons in certain facilities, such as recruiting stations, where civilians often are present.

Last month, in the wake of the Charleston, S.C., shooting, President Barack Obama renewed his call for stricter gun control laws throughout the nation. And on Thursday, in the aftermath of the Louisiana shooting, the president said he was frustrated at his own inability to convince Congress to enact stricter laws.

Brownback on Friday called those “horrific events that happened as well,” but he said military personnel have become a specific target in a number of recent incidents, including an alleged attempt of a suicide bombing at Fort Riley.

But he described other recent mass murders involving civilian targets as “in another category and sphere,” suggesting the state has less authority to control the sale and use of guns in the general population than it does at National Guard facilities.

Earlier this year, the Kansas Legislature passed, and Brownback signed, one of the most expansive gun rights bills in the country, effectively allowing almost any adult to carry a concealed weapon without a permit.

In another example of offering a state response to national news headlines, Brownback has also called on the Kansas Board of Healing Arts to investigate whether any abortion clinics in Kansas are engaged in what he called a “barbaric” practice of selling fetal tissue and organs left over from abortions.

That was a response to the recent release of “sting” videos secretly recorded by a national anti-abortion group which depict officials from Planned Parenthood discussing prices for certain kinds of tissue.

“Recent videos show Planned Parenthood employees treating the unborn child as commodities as they discuss the sale of tissue and organs,” he said. “This certainly does not reflect the culture of life that most Kansans want.”

A state law enacted in 2000 prohibits abortion clinics from profiting from the sale of fetal tissue or organs. Planned Parenthood of Kansas and Mid-Missouri, which operates clinics in Wichita and Overland Park, has insisted it does not engage in such practices.

Brownback said his administration will announce next week how it plans to find $50 million in savings in the current year’s budget. And while he wouldn’t say where those savings would come from, he gave assurances that it would not come from K-12 education spending.

The requirement for the administration to find $50 million in savings was part of the tax and spending package that lawmakers negotiated at the end of the 2015 session.

Quietly, some officials had hoped it might not be necessary if state revenues come in above projections. But last week, the nonpartisan Legislative Research Department released an updated analysis of state general fund spending this year and projected that even with the $50 million in unspecified cuts, the state would end the year next June with only $67.2 million in the bank. Without those cuts, that ending balance would drop to just $17.2 million.

Earlier in the day, Brownback announced Shawn Sullivan, his budget director, would take on the additional role of identifying and implementing “efficiencies” on an ongoing basis throughout the year.

Another part of the budget package included $3 million set aside for the Legislature to hire an outside consulting firm to look at the entirety of state spending and recommend ways the state can operate more effieiently at less cost. But even thugh that’s similar to what Sullivan has been tasked to do, Brownback said that would not be part of his plan for trimming $50 million from the budget because it’s money appropriated for another branch of government.

In an effort to respond to recent reports that hundreds of Kansas teachers are leaving the state this year for jobs in other states, Brownback tried to show that the average teacher actually fares better in Kansas than in neighboring Missouri. But the numbers he offered were immediately called into question.

A large graph prepared by his staff was placed on an easel, showing that average teacher salaries in Kansas have risen each year since 2010, and that they are $7,060 higher than average salaries in Missouri.

Brandon Smith, the governor’s policy director, said the numbers included both salaries and fringe benefits. But the Associated Press, after trying to verify the numbers with both states, reported that only the Kansas number included the cost of fringe benefits. The numbers for average salaries in Missouri did not, thus making that state’s number look artificially low.

The average teacher’s salary-only pay, including summertime pay, is $49,700 in Kansas, AP reported. That’s only slightly higher than the $48,000 a year for the average Missouri teacher.