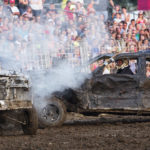 Anti-freeze drains from Clint Doherty's Crown Victoria as it is engulfed in smoke while Dougas Gipson (9) and his 1999 Lincoln finish off the competition to win the full-size class round of the demolition derby, held Friday evening at the Douglas County Fairgrounds.

The Douglas County Fair may just be one of the summer’s biggest attractions — in recent years, it’s drawn upward of 25,000 people to the fairgrounds in Lawrence — but back in the early 1950s, the fair was just a fledgling operation hosted at Haskell University.

Cost: Aside from the demolition derby and Mowbashers, all events are free.

Back then, before the fairgrounds were built, 4-H animals were all housed underneath the school’s football stadium. Or at least that’s what Margaret Kalb’s mother told her growing up.

“She used to talk about that all the time,” Kalb says with a laugh, recalling childhood memories of showing everything from chickens to sheep to cattle with her local 4-H club.

Kalb, who now serves as the executive secretary of the Douglas County Fair Board, says the event has become widely known as one of the largest and most varied of its kind in the state.

To honor that legacy, Kalb and her fellow board members are launching a new logo and slogan that she says they’ll use for this fair — slated for July 24 to Aug. 2 — and many more to come.

Under the banner of “One Great County — One Great Fair,” festivities kick off July 18 with a 4-H dog show and pet show at the fairground.

“We’re all pretty proud of this county and the support we get from everyone throughout the county,” Kalb says. “We thought that tied everything together and represents what we want the fair to be.”

This year’s schedule offers a little something for everyone, though Kalb says the annual demolition derby is the long-established crowd-pleaser.

She’s hoping to attract between 4,000 and 5,000 people to the fairground’s rodeo arena the night of July 31, when drivers in colorful, often creatively named cars smash into each other for cash prizes.

Between rounds, children ages 2 to 11 will have the chance to compete in a kid-friendly version called the Power Wheels Derby.

There’s no need to register beforehand, Kalb says — just show up with your battery-operated toy car (Fisher-Price makes a number of ride-on vehicles under the Power Wheels brand) and have at it. Unlike the grown-up derby, all participants will receive prizes, she says.

For yet another dose of vehicular anarchy, check out the second-annual Mowbashers on Aug. 1 at the fairground’s rodeo arena. In the tradition of the longstanding demolition derby, riders atop riding lawn mowers will battle it out until only one Mowbasher remains.

Moore’s Greater Shows Carnival will have a variety of rides — for both thrill-seekers and the littlest fairgoers — on hand every evening from July 29 to Aug. 1. Individual rides cost tickets, but bracelets for unlimited rides will be available for purchase during Family Night from 6 to 11 p.m. July 30.

All other attractions — including live music from local groups Arnie Johnson and the Midnight Special, Loozin Sleep, SELLOUT and the James Webster Band — are free, says Kalb, who admits she’s partial to the livestock events.

The 4-H veteran served as community leader of a local 4-H club while her children were young. Though they’ve since grown up and moved out of state, Kalb still likes cheer on the fair’s youngest competitors from the sidelines of the 4-H events.

She plans to attend as many as possible when the fair starts up later this month.

“All those kids who were in my club years ago — I still call them ‘my kids,'” she says. “I watched them grow up, and now their kids are in 4-H, too. It’s been really cool to see.”

For more information on this year’s Douglas County Fair, including a full schedule of events, visit www.dgcountyfair.com.

Set Up Community Building for Livestock

AUCTION CARDS Due at Fair Board Office, Bldg. 21S