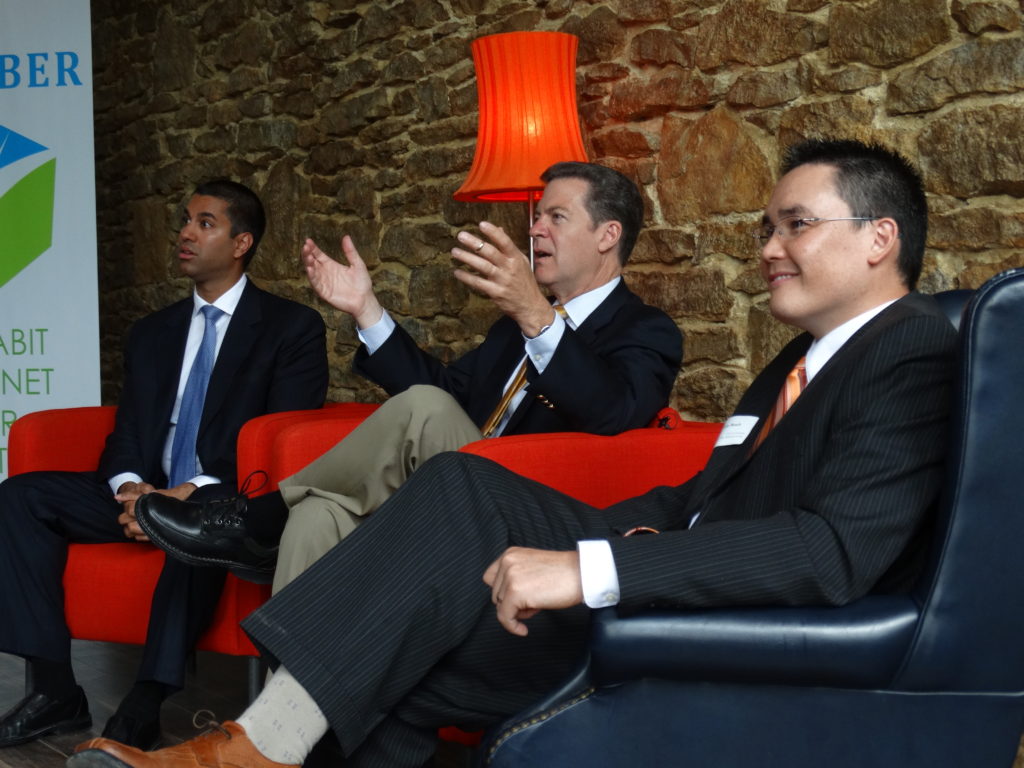 Baldwin City ? A start-up Internet company based in Baldwin City drew praises Wednesday from business, education and community leaders, as well as from a member of the Federal Communications Commission.

Ajit Pai, a native of Parsons who now serves on the five-member FCC, toured the offices of RG Fiber with Gov. Sam Brownback on Wednesday, calling it an example of what small, rural communities need in order to thrive in the digital age.

“One of the reasons that I’m so passionate about this job is that I think in the 21st century, broadband really is the democratizing effect in our society,” Pai said.

RG Fiber is a subsidiary of Reflective Group, a software engineering company founded by Mike Bosch and Josh Strohm, both graduates of Baker University in Baldwin City, and Baldwin City native Casey Morford.

Strohm said that as their software company grew, so did its need for broadband Internet connection, until it reached a point where they were forced to make a choice.

“Catering to other small towns and small businesses has been the core of what Reflective Group has been focused on,” Strohm said. “So it makes sense to stay here and keep that culture, and when we had the issue of not having enough Internet speed, we really had a choice to make. We could either move our company and risk the culture issue; we could stay small and just deal with the limitations; or we could do something about it.”

“So, being engineers and geeks, we decided to give it a shot and figure out what we needed to do to make it happen,” he said. “So now we’ve built a fiber company and are doing well.”

Baker University president Lynne Murray said having that kind of service available in the community will be a boon for the small, private college.

“Our students now are so plugged in,” she said. “They come to college with at least five personal devices, so to be able to have high-speed Internet and have access to it means that we’re opening up opportunities for greater research for them, for greater networking for them, so we’re real proud of Mike Bosch, also a Baker alum, for helping achieve this.”

Pai said high-speed networks like RG Fiber are a critical piece of infrastructure for all communities today. But equally important, he said, is having regulations that ensure those small, local networks have the same kind of access to bandwidth from upstream providers that large cable and telephone companies are able to provide.

In February, the FCC issued new rules for what it calls the “open Internet,” or “net neutrality,” which are supposed to ensure that all Internet providers and customers have equal access to the Web on a nondiscriminatory basis.

“From my perspective, the FCC should create a regulatory framework that gives gives every provider, big and small, the incentive and ability to invest in broadband networks across the country,” Pai said. “And one of the things (Bosch) said to me is that we just need regulatory certainty, to know what the rules are going to be.”

But Pai said he does not support the idea, endorsed by some small internet companies, of regulating the Internet in the United States like a public utility.

“First of all, these networks are very dynamic. They’re nothing like the monopoly networks that were operated by AT&T in the era of Ma Bell,” he said. “Secondly, these networks are extremely expensive to build and to operate, especially for smaller companies like RG Fiber. These kinds of regulations have a disproportionate effect on them.”

Pai was nominated to a seat on the FCC by President Barack Obama in 2012. The son of immigrants from India, he earned a bachelor of arts degree from Harvard University and a law degree from the University of Chicago.

Before joining the FCC, he worked in the communications practice of a Washington, D.C., law firm and served as associate general counsel at Verizon, Inc. Prior to that, he held several positions on the staff of the FCC and also worked on the staff of various congressional committees.