School bus drivers are often asked to take on the duties of nurses, confidants and disciplinarians in the course of driving their routes. 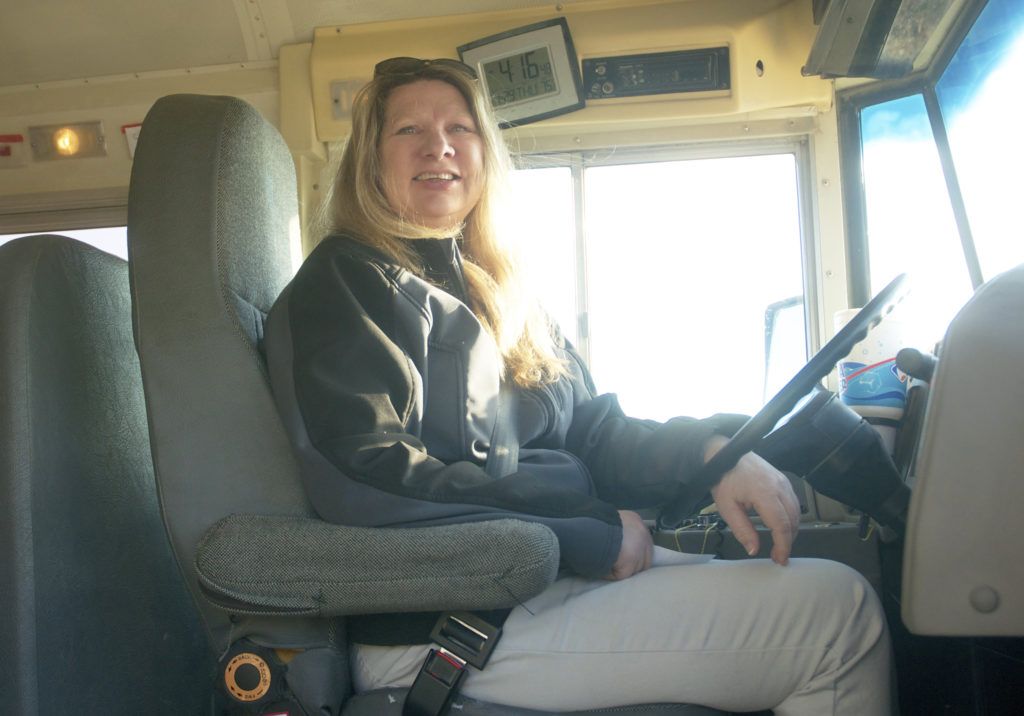 Thursday morning, Tammy Ritter, a bus driver with the Baldwin City school district, took on another role — that of firefighter.

Lori and Dennis Lederer credit Ritter with saving their rural Baldwin City home Thursday morning after a dog house caught fire on their front porch from a light bulb meant to provide warmth to their Boston terrier, Bilbo.

“We’re extremely thankful,” Lori Lederer said. “With the wind this morning, we would have lost our house if she didn’t do what she did.”

While driving her morning route about 7 a.m. Thursday west of Baldwin City, Ritter noticed 4-foot-high flames on the porch of the Lederer’s home at CR 1040 North 100 Road. She stopped the bus with some of her students in their seats and walked to the porch, fearing someone could be in the house.

“I didn’t run,” she said. “This is my second week back to work after breaking my ankle.”

The Lederers and their son Johnny Lederer had all left home for the day. When Ritter found no one home, she took the situation into her own hands. After unplugging the electrical cord to the light, Ritter first tried to lift the doghouse, but got only a lungful of smoke for her efforts as the roof came loose. She took a moment to catch her breath before successfully kicking the doghouse to the side of the porch and then tossing it on the front lawn.

“When I threw it, fire went everywhere,” Ritter said. “I stomped out all the puddles as best I could using my good foot.”

Ritter then got back on her bus and called the Willow Springs Township Fire Department, but with a new passenger onboard.

“When I got on the bus, the dog said, ‘I’m going to stay with you,'” Ritter explained.

So bus driver, Bilbo and passengers moved on to the next stop on Ritter’s route, where she told Tiffany Paulick, the mother of her students, about the fire.

“She wasn’t sure what she should do,” Paulick said. “She asked me if I could go check on it to make sure it wasn’t all over the porch. She asked if I could take the dog, but I have two dogs and had an appointment in Lawrence.”

Paulick went to the Lederers home, finding the smoldering remains of the doghouse she was worried would reignite to threaten the house in the brisk morning wind.

“Luckily, there was a hose on the side of the house,” she said. “I used that to hose it down.”

Lederer, meanwhile, got a call at about 7:30 a.m. at her job at Baldwin High School from her son-in-law, Christopher Brubaker, a Willow Springs firefighter. He told her there had been a fire at her home, but that firefighters had arrived to find Ritter’s quick save followed by Paulick’s work with the garden hose had taken care of the problem.

Ritter returned to the house after dropping her students at school, happy to find everything was fine. So was Bilbo.

“As soon as I stopped the bus, the dog saw everything was OK and ran out the door,” she said.

The only damage to the house was a dark stain on the porch floor and another football-sized singe on the siding. It wasn’t much, but it was evidence of what could have been a disaster for the Lederers if not for the timely actions of Ritter and Paulick, Lederer said Thursday evening.

“We can’t believe this happened,” Lederer said. “She came by just at the right time. My neighbors, I don’t even know them. They just moved in. We wouldn’t be in this house now if not for them. We know it would have just went up in flames.”