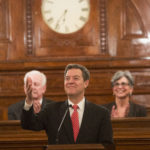 Gov. Sam Brownback delivers his State of the State address to a combined session at the Kansas State Capitol on Thursday, Jan. 15, 2015, in Topeka.

Topeka ? Gov. Sam Brownback on Thursday blamed the school finance formula for most of the state’s projected $714 million budget shortfall, and he called for repealing the formula immediately while spending the next two years writing a new one.

He also called for a constitutional amendment to change the way state Supreme Court justices are chosen, suggesting they should either be elected directly by the voters or appointed directly by the governor, subject to confirmation by the Senate.

And he called for moving local elections from the spring to the fall.

Those were just a few of the major initiatives Brownback outlined in his first State of the State address since being re-elected in November.

“There may be some who consider this course too bold … well, I’m the sort of guy who would have sent Alex Gordon from third base,” Brownback said, referencing the final play of the 2014 World Series between the Kansas City Royals and San Francisco Giants.

Click here for the full text of Brownback’s State of the State address.

Brownback delivered the address from the Kansas House of Representatives chamber before the full Legislature, members of the Supreme Court, his cabinet, the Kansas Board of Regents, State Board of Education and many invited guests.

Brownback enters his second term with the state facing a projected $279 million revenue shortfall for the last half of the current year, plus another $436 million shortfall for the fiscal year that begins July 1.

Budget analysts say most of that is due to the sweeping tax cuts enacted, at Brownback’s urging, during the 2012 and 2013 sessions. But Brownback laid the blame squarely on the school finance formula itself.

“A majority of the projected shortfall we face is due to increases in K-12 spending since Fiscal Year 2014,” Brownback said, repeating it a second time for emphasis. The prepared text of his speech included a footnote citing his upcoming budget documents, which won’t be released until Friday.

He proposed repealing the law in its entirety and, for the next two years, appropriating money directly to each of the state’s 286 school districts, bypassing the Kansas State Department of Education, while lawmakers work to write a new formula.

“For decades now, Kansas has struggled under a school finance formula which is designed not to be understood — to frustrate efforts at accountability and efficiency,” Brownback said.

“Not surprisingly, that formula has been under litigation in Kansas for the past 40 years,” he added.

Senate Minority Leader Anthony Hensley, D-Topeka, pointed out that the formula has only been in place for 22 years and called that statement an example of the “misinformation” that Brownback and other Republicans have used to attack school funding.

“We don’t have to litigate the school finance formula if (lawmakers) would meet their constitutional duty under Article 6 of the Kansas Constitution and fund the formula fully,” Hensley said.

Brownback offered no details about how that would work, but his speech left open the possibility that the Legislature would have to write budgets for all 286 districts — and each district possibly having to come to Topeka to lobby for funding — with no formula to guide them in deciding how much any individual district should get.

“It’s a bad idea,” said Rep. Barbara Ballard, D-Lawrence, who serves on the House budget-writing committee. “By what criteria are you going to decide to give that money to those schools?”

Kansas currently spends more than $3 billion a year, or about half of the entire general fund, for K-12 public education. That includes about $1.9 billion in base state aid, plus funding for special education, pension contributions and so-called “equalization” aid for less wealthy districts.

Brownback provided few details of the budget proposal he will present to the Legislature. Those will be released Friday morning during a joint meeting of the House Appropriations and Senate Ways and Means committees.

And in a break from past practice, the governor’s budget staff will not hold a separate briefing for the news media in which reporters were traditionally given the opportunity to ask specific questions about the budget.

He did, however, say that he will propose a two-year budget for the upcoming fiscal year and the one that starts July 1, 2016, and that he wants to continue the process of eventually phasing out the state income tax entirely.

He said those budgets will be “in balance — with revenues exceeding expenditures each year.”

An interim legislative committee spent several months studying alternatives for the timing of local elections. The Legislature has considered bills in previous sessions to move them from the spring of odd-numbered years to November of even-numbered years, coinciding with state and federal races.

Some lawmakers, and Kansas Secretary of State Kris Kobach, also have proposed making city and school board elections partisan, an idea that has been roundly criticized by local government officials in Lawrence and Douglas County.

But Brownback said spring elections typically produce extremely low turnout, and he said moving them to the fall would help get more voters involved in local government races.

Regarding the Supreme Court, Brownback said: “The Legislature should put before Kansas voters a proposed constitutional amendment for a more democratic selection process — one either based on the federal model or providing for direct election of Supreme Court justices, as we did for the first 100 years of our history.”

Currently, a nonpartisan nominating commission screens applicants for a Supreme Court position and sends three nominees to the governor. Critics of that system say it puts too much power in the hands of the Kansas Bar Association because, under the constitution, lawyers make up a majority of the commission.