Gardeners often talk of season-long color and interest in their gardens, but many feel limited with ornamental grasses, colorful fruits, and decorative bark as the only options for sprucing up the landscape in winter.

Vernal witch hazel, the earliest of bloomers in the Midwest, is another option, and one that will show off its papery yellow flowers any day now.

Vernal witch hazel (Hamamelis vernalis) is a medium to large shrub native to the Missouri Ozarks, northern Arkansas, and isolated areas in Texas. It grows to 5 to 10 feet tall and is rounded by nature so it can be nearly as wide. 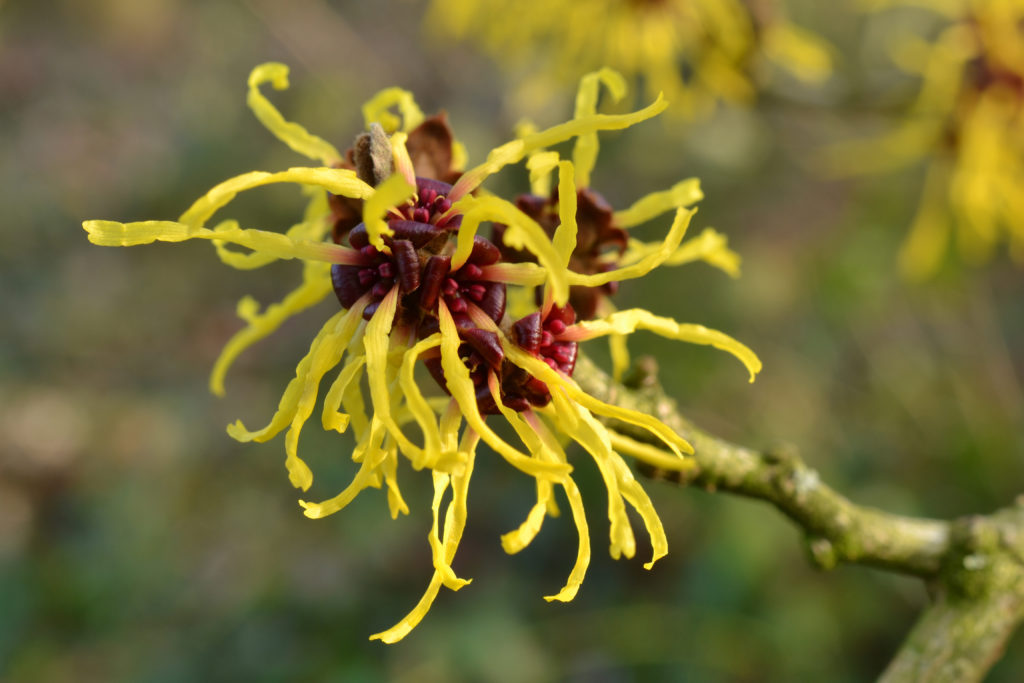 Witch hazel flowers in the winter.

The flowers are borne along the stems with four long, narrow petals each. The petals unroll on warm days and roll back up to protect themselves on the coldest days. Blossoms are also very fragrant and add a touch of spring to the air when cut and placed in a vase indoors. Outside, they typically last until March.

Besides providing the earliest reminder that spring is on its way, vernal witch hazel is an attractive selection year-round. Thick, dark-green leaves appear later in the spring, providing a nice backdrop to other plantings, and fall brings a transition to chartreuse or bright yellow colors.

Full sun to partial shade is the best location for vernal witch hazel, but otherwise the plant is tolerant of a wide range of soil conditions. It is especially well suited for stream banks or steep slopes where its root system slows erosion. Insect and disease problems are uncommon with the plant.

Crosses between Japanese witch hazel and Chinese witch hazel are also common in the landscape industry. They are known by horticulturists as Hamamelis x intermedia, and by their cultivar names, including Arnold’s Promise, Diane and Jelena (sometimes called Copper Beauty). They typically flower very early like vernal witch hazel, but vary in flower color, fall color, and plant size. For example, Arnold’s Promise is vase-shaped with a touch of red in the center of its flowers and better fall color than other varieties.

— Jennifer Smith is a former horticulture extension agent for K-State Research and Extension and horticulturist for Lawrence Parks and Recreation. She is the host of “The Garden Show” and has been a gardener since childhood. Send your gardening questions and feedback to features@ljworld.com.