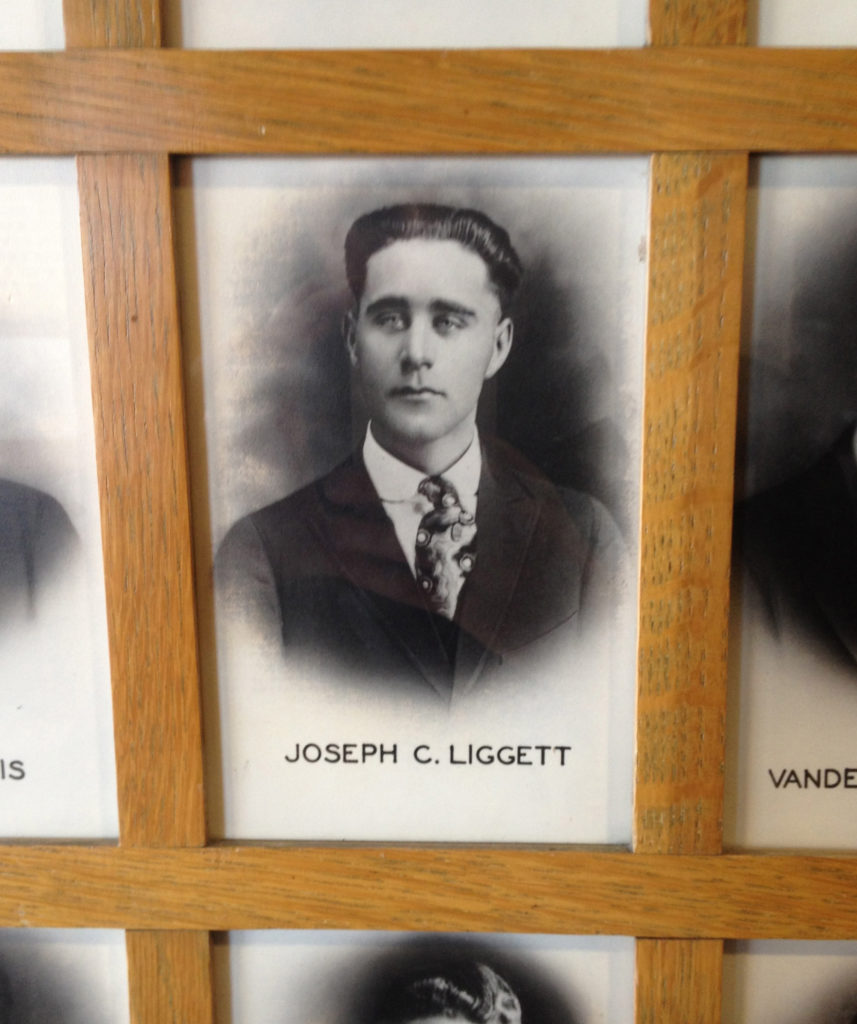 The photo of former KU student Joseph C. Liggett is among 129 photos of KU students and alumni who gave their lives in service to World War I, displayed on the sixth floor of the Kansas Union. Ray Liggett of Shawnee stumbled upon his great uncle's connection to KU and the war while doing genealogical research, but didn't previously know the Union was a memorial to him and other casualties. Ray Liggett said he learned that Joseph Liggett enlisted in October 1918 and died the next month. He was a member of KU's unit of the Student Army Training Corps but died in Lawrence in the influenza epidemic before he was ever deployed.

Two of Kansas University’s most trafficked buildings were constructed as memorials to KU’s casualties of World War I.

As the Great War marks its 100th anniversary most of the tens of thousands of fans packing Memorial Stadium each fall, or the thousands of students and visitors flowing through the Kansas Memorial Union each day, don’t know the buildings’ significance — which is one reason KU hasn’t constructed buildings as memorials since.

Read more about KU’s involvement in World War I, and the construction of Memorial Stadium and the Kansas Memorial Union, on the sixth floor of the Union, 1301 Jayhawk Blvd.

The KU History website, kuhistory.com, also has related articles, including “Rising for the fallen”, “Kansas must have a stadium!” and “We remember.” 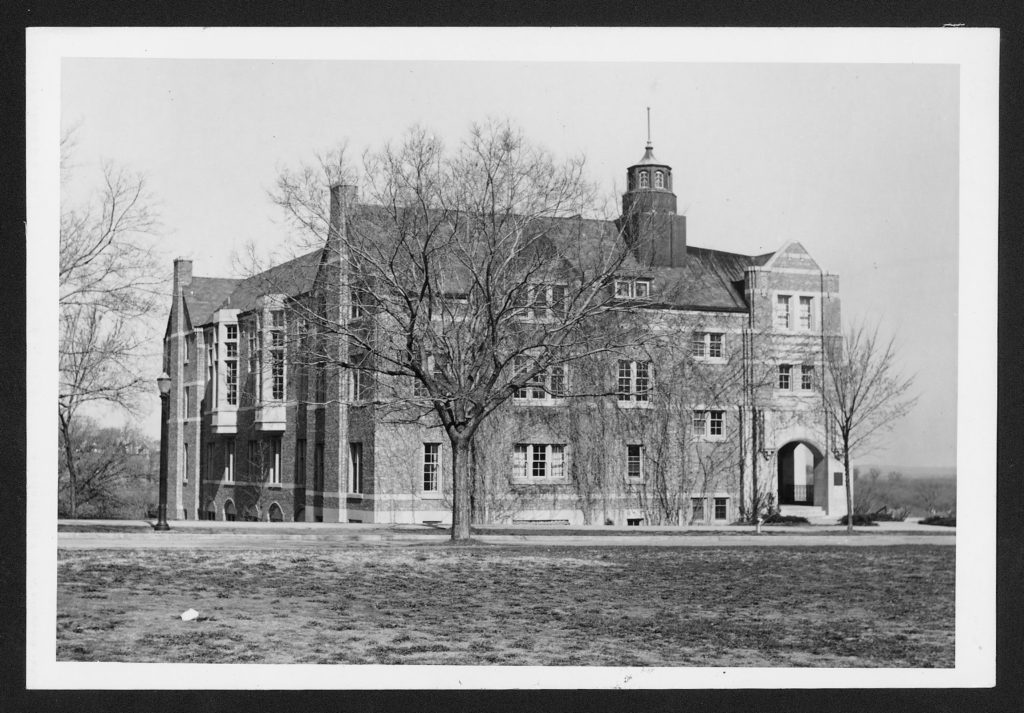 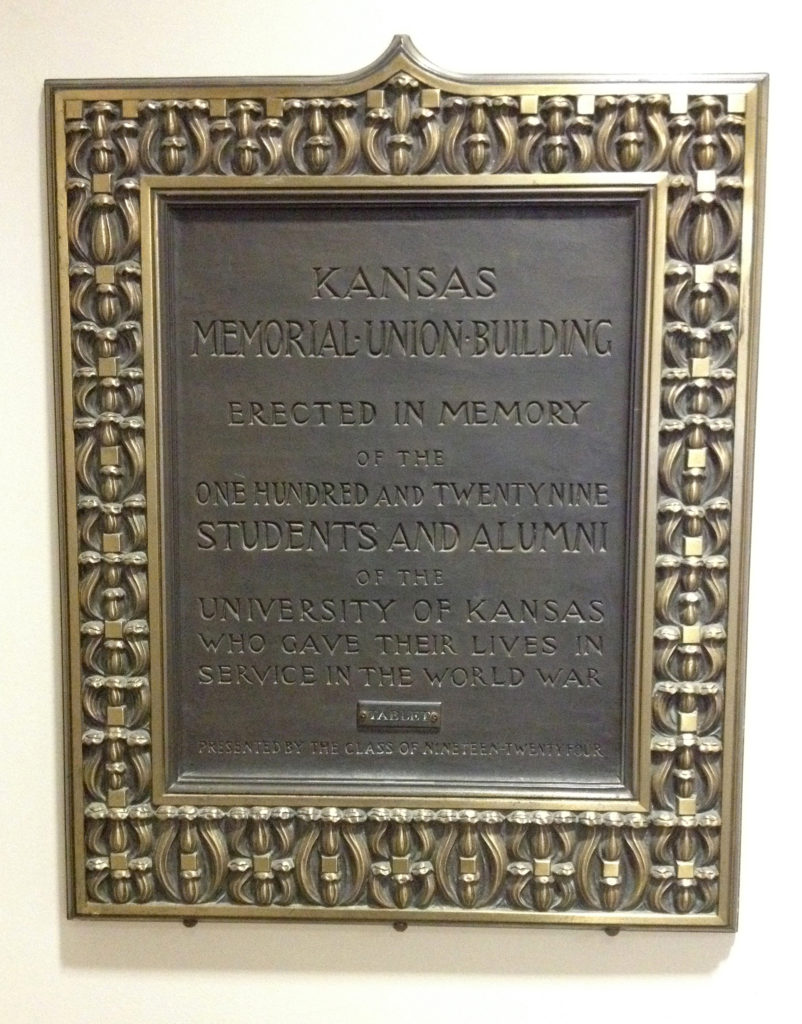 This small plaque, inscribed as a gift of the class of 1924, is displayed on the main level of the Kansas Union. It reads, Kansas

Except for the name “Memorial Stadium” in a few spots, the stadium has no obvious signage noting its WWI roots. The union — where “Kansas Union” is carved over the main entrance — has a small plaque on its main level, but reading more requires a trip to the top floor.

William Towns, former union operations manager and KU history scholar, said that times and decorum were different back then. He said it wasn’t unusual for memorials to be less “self-aggrandizing.”

At the same time, Towns and some others say it’s too bad that tributes to the buildings’ valiant beginnings aren’t more prominent now.

The stadium, in particular, surprised Ray Liggett and relatives, who learned it was a war memorial only after stumbling across genealogical information on a great uncle who was one of KU’s WWI casualties.

“I thought … surely there was a plaque that indicated why they built it and who it was dedicated to rather than just a paper document,” said Liggett, of Shawnee. “Most people don’t know why it’s ‘Memorial Stadium’ and what that means.”

Granted, the original forms of each building were skeletons of what they are today.

Even before Armistice Day in 1918, KU started considering ideas to memorialize its fallen students and alumni, which ultimately totaled 129.

According to KU History, the union and stadium beat out other ideas including a grove of trees and an arch at the entrance to campus, and the Memorial Corporation formed to oversee construction first met in 1920. A crowd of 3,000 attended a 1926 cornerstone-laying parade and ceremony at the union, but the efforts endured years of struggling fund drives and construction delays, with the stadium completed in 1927 and the union not opening until 1938.

Each has undergone significant renovations and expansions since.

Even prior to 1950, their lack of recognition was problematic for at least one influential KU chancellor.

Following World War II, then-Chancellor Deane Malott rejected the idea of building a new fieldhouse or swimming pool in honor of KU’s war dead, opting instead for a “pure” memorial in the form of KU’s WWII Memorial Campanile.

“No one thinks as he sits in (the stadium) about the sacrifices of several score of young men of this institution who lost their lives in that struggle (WWI),” Malott said, according to a KU History article.

He added, “We have been determined this time that we would have a memorial that would be truly a memorial, and not merely use that is an excuse to fill a need at the University.”

Towns said the union probably would eventually have been constructed in some form, but the fact that a nationwide student union movement — many colleges are home to memorial unions — intersected with the memorial movement of the time and certainly gave it “fuel.”

“World War I was an apocalyptic catastrophe,” he said. “Once it ended there was this almost religious impetus to memorialize warriors. In Lawrence … students died in the war effort, so it was natural to memorialize them.”

One of KU’s most famous WWI dead was KU graduate William T. Fitzsimons. According to KU History, Fitzsimons, killed in a 1917 German air attack on a French field hospital where he was working, was known as America’s first official casualty of the war.

Joseph Liggett enlisted in KU’s Student Army Training Corps in 1918. Just a month later, the KU student was dead, a victim of the influenza epidemic. He never deployed.

After learning he was ill, Liggett’s family traveled nearly 300 miles from tiny Almena to Lawrence to see him before he died.

That history and more is displayed on the sixth floor of the union, along with photographs of all 129.

Towns said the stadium eventually was separated from KU’s Memorial Corporation and is now run by KU Athletics instead. He is glad the union has added wallboards highlighting KU history, including nods to the buildings’ WWI roots.

“They should be recognized,” Towns said. “It’s too bad that the KU community is not as familiar with the institutional history as it should be.”