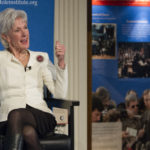 Former Kansas governor and secretary of the U.S. Department of Health and Human Services Kathleen Sebelius raises both thumbs up and flashes the crowd a smile as she tells stories about her experiences in Washington while speaking at the Dole Institute on Thursday evening.

Topeka ? Former Gov. Kathleen Sebelius on Thursday called Gov. Sam Brownback’s decision to rescind employment protection for gay, lesbian and trans-gender state employees “distressing” and said she did not understand why the incumbent governor made the decision.

“I find it incredibly distressing that on the day that the 37th state (Alabama) has now struck down a ban on same-sex marriage that Kansas would put ourselves on the map as rescinding an executive order about a tolerant workplace,” Sebelius told a crowd gathered to hear her speak about women in politics at the Dole Institute, 2350 Petefish Drive.

The former Democratic governor was responding to a question from the audience after speaking for about an hour about her own career and the challenges women face when they enter politics.

Tuesday’s announcement by Brownback, a Republican, that he was rescinding an executive order Sebelius signed in 2007 was clearly on the minds of many in the audience, and her comments drew a strong round of applause.

“It is distressing,” she continued, “but I think we need to be clear to people around the United States, ‘This is not Kansas. This is not what the state was founded on, it’s not what we believe in,’ that this is not an acceptable policy going forward.”

“What I was trying to do as an employer of a significant workforce, at universities (and) throughout state agencies, was send a strong signal that we wanted a diverse and talented workforce, that people would be protected in a work environment, that Kansas was a tolerant state and that we were open for business,” she said. “I felt that it was an important signal to send and is still an important signal to send.”

Sebelius was elected governor in 2002 after serving eight years as insurance commissioner. She was re-elected in 2006 but resigned in 2009 to accept the post of Health and Human Services Secretary for President Barack Obama.

She stepped down from that post last June following the troubled roll-out of the new web-based health insurance exchange that was a critical piece of the Affordable Care Act.

Sebelius said she now divides her time between Washington, where she keeps an office and serves on a number of boards, and Kansas, where her husband, Gary Sebelius, is a federal magistrate.

During her remarks, Sebelius said it is easier for women to get into politics now than it was when she first started working as a lobbyist and, later, when she ran for the Legislature.

She quoted the late Texas Gov. Ann Richards, whom she called one of her mentors, as once advising young women interested in running for office that voters look at women differently. She said Richards advised them that voters think: “If you’re single, you couldn’t get a man. If you’re married, you’re neglecting a man. If you’re divorced, you couldn’t keep a man. And if you’re widowed, you killed a man.”