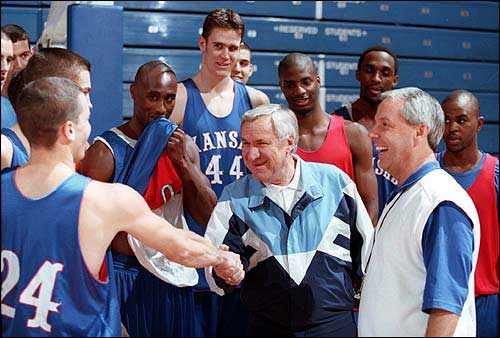 Reaction to Saturday’s passing of legendary college basketball coach Dean Smith has dominated the sports world throughout the day Sunday. And people in Lawrence, where Smith went to school and played basketball for Kansas University coach Phog Allen have joined in the celebration of his life. 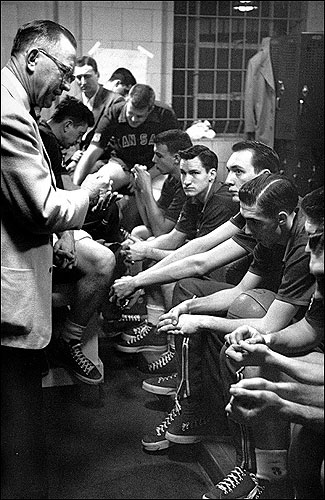 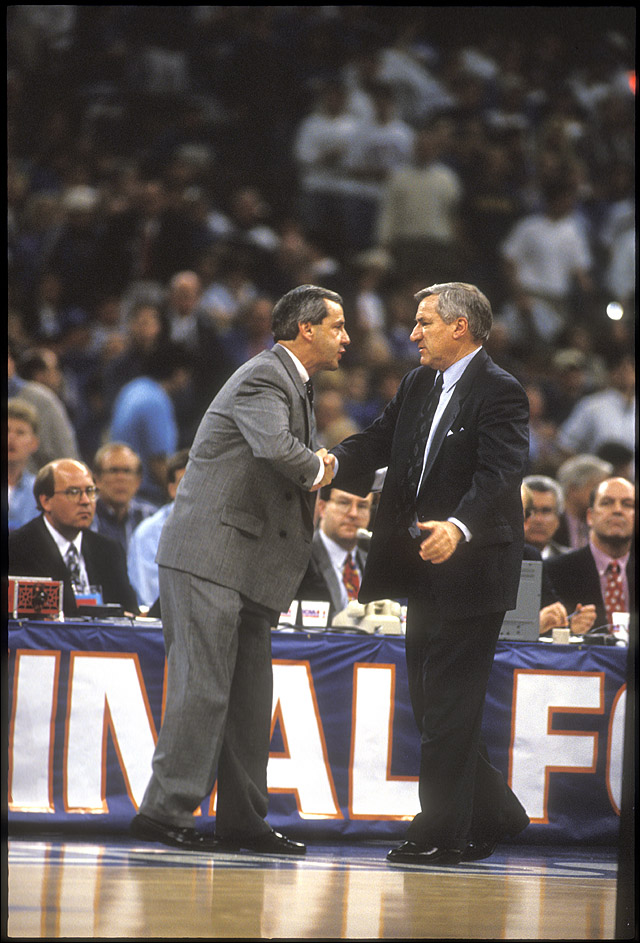 Roy Williams shakes hands with his mentor, Dean Smith, during a Final Four game between Kansas and North Carolina. KU met UNC twice in the Final Four in the 1990's.

“There have been a lot of pillars in our profession over time,” current KU hoops coach Bill Self said in a news release. “Of course, we can think of one every day here in Dr. Allen, at Oklahoma State there is Mr. Iba, there’s been Pete Newell, Bob Knight, Coach K (Mike Krzyzewski) — all have been huge pillars in our profession. But one of the most classy and innovative coaches that our sport has ever known was coach Dean Smith. Coach Smith was a Kansan, growing up in Topeka, and part of the 1952 national championship team at Kansas. He carries great weight around here now and all the way back to his days here as a lot of his teammates are still here in town and think the world of him.”

Smith passed at his home in Chapel Hill, North Carolina, where he guided the Tar Heels to 23 consecutive NCAA Tournaments and 11 Final Fours. He led UNC to 13 Atlantic Coast Conference championships and won either the ACC regular-season title or the postseason conference tournament 20 out of 27 years. He coached 32 all-conference players and 26 All-Americans while at UNC and always spoke fondly of his connection to Kansas, whether it be through those he played with and for or Carolina guys he helped lead to Lawrence like Larry Brown and Roy Williams.

“Of course, I was connected with Coach Brown,” Self said. “But from reading and hearing what everyone talks about what a great coach (Smith) is — but they talk more about what a great impact he had on their lives as a man and as a mentor. It’s a huge loss to not only our basketball world, not only to the college game, not only to the fans that follow it but to society in general. Because he was an innovator and certainly set an example for people to follow not just as players, but for the people that he touched directly and indirectly. It’s a sad day.”

“I thought of Dean as a man who wanted to know how to coach basketball,” Lovellette said via news release. “As a player, he would take the team we were going to play and run the plays against us. He was very involved in the structure and the play the other teams to use us to combat what they were going to throw against us. He was a statistician. (Former Kansas head coach) Dick Harp and Dean worked very close together. Dick felt very comfortable about turning the other team against us. Dean was a great ball player. He really enjoyed basketball and I knew down the road that Dean was going to do well.”

After graduating from KU, Smith served as an assistant coach at Kansas under Allen for the 1953-54 season. He later went on to coach North Carolina basketball from 1961-97, winning two NCAA national championships, in 1982 and 1993, and the 1971 NIT title. When he retired, he was the winningest coach in college basketball history compiling an 879-254 record. His 879 victories while at UNC rank fourth on the NCAA Div. I all-time list.

“I can remember Dean not only being on that 1952 national championship team, but my relationship with him goes back even further than that when he played high school basketball at Topeka High,” Hall of Fame radio broadcaster Max Falkenstien said in the release. “I even broadcasted some of those games, so Dean and I have a long-standing relationship. He many times told me that, ‘My dad has a recording of you broadcasting my games at Topeka High and I’m going to give it to you. He received that because you made me sound so good.’ Dean had a great career, everybody knows that, but he had a strong feeling for Kansas despite of the fact that he spent over 40 years at North Carolina. I think he still realized that this is where his roots were from.”