School board picks firm to use in superintendent search, plans community input 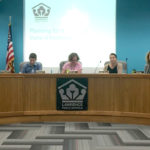 Members of the Lawrence school board meet in this file photo from July 27, 2015.

The Lawrence school board has decided on an outside firm to use in its search for a new superintendent, with many of the board members citing the firm’s process for involving the community as a main factor in their choice.

“We’ll be hearing from parents and community members and students and teachers,” said school board President Vanessa Sanburn. “There’s a whole wide array of groups that will help inform us as to what it is we should be looking for.”

After a general consensus that the board would hire a firm as opposed to doing the search in-house, board members voted to hire McPherson & Jacobson, of Omaha, Neb., to conduct the search for the next superintendent for an amount not to exceed $25,000.

The first phase of McPherson & Jacobson’s five-phase search process has three steps: to determine the characteristics of the new superintendent, the timeline for the search and the advertising venues.

For the first step, “stakeholders” will provide input about the characteristics they would like the new superintendent to have through online surveys and focus groups. Sanburn said the board will choose which stakeholder groups — potentially administrators, staff, teachers, students and community or business groups — it would like the consultants to meet with. That information provided by the groups will be used to create the characteristics document.

“The initial creation of that characteristics document, that basically is the measuring stick used in determining how all the applicants measure up to what we’re looking for,” she explained.

After applicants are selected, screened and interviewed, a final pool of candidates will be determined. The board will then select representatives from each stakeholder group to form a smaller focus group of 8 to 12 people.

“(Once final candidates are known) we’ll have another opportunity for the community — smaller focus groups — to work with those candidates in order to assess how they feel about them and we’ll definitely take that into account when making our decision,” Sanburn said.

The board’s next regularly scheduled meeting is Jan. 11, but it will call a special meeting beforehand to establish who will be in the first focus groups and when they will meet, Sanburn said.

Also at the special meeting — which is tentatively planned for the first week of January — board members will likely establish a more precise timeline, said David Cunningham, director of human resources and legal services for the district. Cunningham said the district would like to post advertising for the position fairly quickly.

“I would be surprised if we don’t have it posted within the month,” he said.

In other business Monday, the school board:

• Reviewed an update on the district’s bond construction projects. In March, 15 of the 21 projects are scheduled to be complete. The majority of projects have used capital outlay funds in addition to funds from the $92.5 million bond issue, bringing the total amount spent so far to $102.6 million.

• Reviewed the district’s 2011-2015 graduation rates for all students, as well as several subgroups: low socioeconomic status, disabilities, English language learners and race/ethnicity designation. Within the five-year span, rates in all subgroups have generally improved, and overall rates have increased from 85 to 92.1 percent. At 83.9 percent, the lowest rate is for students with low socioeconomic status.

• Approved a resolution to make its third and final school bond issue. The bond issue of $20.5 million will be the final series of $92.5 million in bonds sold for the district’s renovation and construction projects at its facilities. The board will have final interest rates for the issue at its meeting on Jan. 11.

• Approved an agreement to develop a facilities master plan for the district’s six secondary schools, with an emphasis on Lawrence High School. The board approved the scope of services and schedule for facility master planning provided by Gould Evans Associates, not to exceed $141,400.

• Three fifth-grade students spoke to the board about a recycling program they began last month at Cordley Elementary School. Joe O’Keefe, Casey Kong and Owen Musser urged the board to add recycling bins to all classrooms and school cafeterias in the district.