Education groups gearing up for next school finance battle

Topeka ? Within the next two years, Kansas lawmakers are expected to craft a new school finance formula to replace the one they repealed earlier this year.

On Friday, more than 100 public school officials, education advocates, and even some lawmakers gathered in Topeka to begin talking about what that formula should look like.

“It’s really about trying to start the conversation by giving the people here more information, more data,” said Mark Tallman, a lobbyist for the Kansas Association of School Boards, which hosted the summit meeting.

Rep. Boog Highberger, D-Lawrence, the only elected official from Lawrence to attend the gathering, said he came “to get a better understanding of school finance and what our desired outcomes are and the best way to get there.” 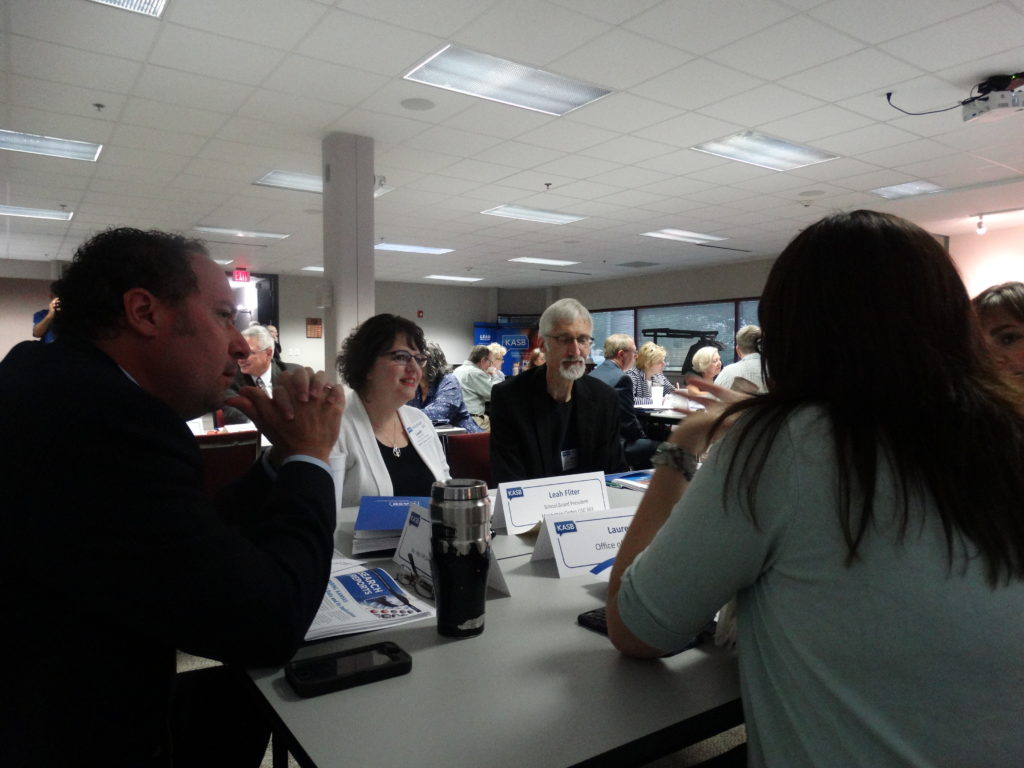 Rep. Boog Highberger, center, D-Lawrence, takes part in a small-group discussion about how best to fund public schools during a summit meeting on school finance hosted by the Kansas Association of School Boards. Highberger was the only public official from Lawrence to attend the summit.

Public school funding is the single largest line item in the Kansas state budget, topping just over $4 billion in the current fiscal year. So the decisions about how much the state should spend and how that money should be divided up among the state’s 286 school districts are some of the most intensely political decisions lawmakers have to make.

This year’s decision to scrap the old formula, which had been in place since 1992, came in the middle of a constitutional lawsuit that will be argued in front of the Kansas Supreme Court later this year.

But that old formula was itself the byproduct of an earlier school finance suit, and so was the one before it which was crafted in the early 1970s, said Brian Jordan, KASB’s assistant executive director for leadership services.

“The idea of us being in a lawsuit on our school finance is not a new idea in Kansas,” Jordan said. “That’s something that, if you look back historically, about every 20 years, there tends to be some type of adjustment made to how we really fund schools.”

It’s also something that is not unique to Kansas. In the past 20 years, nearly every state has been sued over its school funding mechanisms. For many years, plaintiffs were winning most of those cases, but in recent years the tide has started to turn.

Those lawsuits tend to flow from state constitutions, most of which have language similar to that in Kansas which says the state is responsible for providing a system of public education. Most states also have “compulsory attendance” laws that say all children in the state within certain age limits are required to attend some form of educational institution.

Because states have taken on that responsibility, courts have said, state funding for public schools has to meet two basic standards: equity and adequacy.

The equity standard means that all children in the state must be treated equally, regardless of where in the state they live or how wealthy the district in which they live happens to be.

It also means that the tax burden for funding public schools must be distributed relatively evenly across the state so that districts with less property wealth do not levy vastly higher tax rates than districts in wealthier areas.

And, more recently, as states and the federal government have imposed outcomes-based standards on schools, requiring them to bring all students up to certain levels of proficiency, courts have said that state governments must provide adequate funding for schools to achieve those standards.

In 1992, Kansas responded to those kinds of rulings by establishing a uniform, per-pupil funding system, although it gave additional “weightings” to certain kinds of students, and certain districts, to adjust for the higher costs associated with, for example, teaching non-English speaking students or running a district in a sparsely populated rural area.

It also levied a uniform statewide property tax levy to fund local schools, although districts were given limited authority to raise additional taxes to fund “local option” budgets. And it provided “equalization aid” so that poor districts could raise comparable amounts of money with comparable tax rates as wealthier districts.

Tallman said that regardless of what new formula lawmakers come up with, they will still have to meet those standards.

“But I think the courts have also said in the past that how you exactly do those — what exactly a weighting system might look like; or how much equalization; or frankly how much you rely on at the local level versus the state level — those are still policy decisions,” he said. “The question is simply going to be, at what point does someone make the case that this really isn’t getting the job done?”

Goals of a new formula

Those attending the conference said whatever new formula lawmakers devise needs to reflect the diverse needs of all the different school districts in the state.

Amy Martin, an Olathe school board member, said her district is growing rapidly. It typically opens at least one new building each year because of the large volume of new residential construction in Johnson County, and next year it plans to open a new high school.

“The kids keep coming, and we keep squeezing them in,” she said. “We’ve slowed down a little bit the last couple of years, but we’ve had years when we’ve grown by over 1,000 students.”

But in Washington County in north-central Kansas, school board member Rod Stewart said his district faces the opposite problem.

Meanwhile, much of Friday’s meeting was devoted to discussing what kind of outcomes Kansans expect from their public schools, regardless of their size or what part of the state they’re in.

Deputy Education Commissioner Brad Neuenswander said the Kansas Department of Education recently conducted focus group surveys at more than 20 town hall meetings throughout the state and found that Kansans have varying opinions about the kinds of knowledge and skills students should have by the time they become adults.

Only 23 percent of those who took part in the focus groups said traditional academic knowledge was the most important thing for schools to teach. Many more said schools need to focus on nonacademic and interpersonal skills such as communication, teamwork, citizenship and family skills.

That was also true among business and industry professionals who took part in the surveys who rated “conscientiousness” — the ability to perform a task correctly and see it through to the finish — as the most important skill young graduates need to have.