KU Today: Getting down to business at the new Capitol Federal Hall

Construction continues on $70.5 million building, expected to open next year 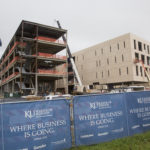 Pictured in June 2015, Capitol Federal Hall, the new KU School of Business building, is going up on Naismith Drive across from Allen Fieldhouse. Construction is slated for completion in spring 2016, and the 166,500-square-foot building will open for classes by fall. The total project cost is 0.5 million, with the 0.5 million construction cost coming from private funds.

At least one daily occurrence in Summerfield Hall will be a thing of the past when the Kansas University School of Business moves into its new home next year.

It will be difficult to disappear in the new Capitol Federal Hall, and that’s by design.

The $70.5 million building is taking shape on Naismith Drive, across the street from Allen Fieldhouse.

Groundbreaking was in late 2013, and construction is scheduled for completion in April. Classes will begin there in fall 2016, or possibly the preceding summer.

The 166,500-square-foot Capitol Federal Hall is four stories high and constructed in an “H” shape. Exterior walls are largely glass, and in the center of the “H” is a large atrium — 7,700 square feet — where everyone is supposed to come together.

“We wanted to intentionally pull all the student activity onto the first floor, so when you walk in you feel the energy,” said Kelly Watson Muther, School of Business chief of staff.

The atrium will feature a coffee bar and spaces for students to sit or gather with others between classes, Muther said. Especially with a push for interdisciplinary work, the school wants the new building to be welcoming and enticing to students from other majors, too.

The atrium ceiling extends up all four stories, with balconies overlooking it. Even those balconies are designed so students won’t disappear — instead of being stacked on top of each other in perfect alignment, they’re staggered so one could look down and see people on the balcony below.

Other features of the building include a 350-seat auditorium.

Guthrie said while the biggest business lecture classes will remain in Budig Hall, smaller lecture courses as well as speakers and events all will happen in the new auditorium.

The building’s glass walls, while allowing views into the building, also provide some nice views looking out. The ‘H’ shape is strategically angled so windows on the building’s west side enjoy views of historic Allen Fieldhouse across the street.

That includes several conference-style classrooms and the dean’s office. Also just off the dean’s suite is a small outdoor patio surrounded by a green roof.

This summer, huge cranes and a team of about 90 construction workers have been hard at work on the site.

When fall classes begin, the north wing should have a roof and windows, with drywall installation beginning, according to Tim Ockinga of JE Dunn Construction, the building’s project manager. The south wing will be a few steps behind that.

Another building highlight noted by Ockinga: The polished concrete floor of the atrium will feature a 24-foot inlaid Jayhawk.

Capitol Federal Hall will be the largest academic facility ever erected at KU entirely through private support, according to KU. The Capitol Federal Foundation of Topeka provided the lead gift of $20 million for the building’s construction.