KU Today: Architecture, design and planning dean has eye on future — and aesthetics 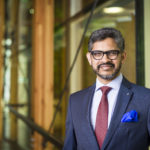 Mahesh Daas is pictured as Dean of KU's School of Architecture, Design and Planning.

Every morning, Mahesh Daas says he jogs around the Kansas University campus, and he is constantly struck by its aesthetic beauty.

You might say Daas, who takes over this year as KU’s new dean of the School of Architecture, Design and Planning, is something of an expert when it comes to the aesthetics of a university campus. That’s the focus of his new book, “Leading with Aesthetics,” which examines the transformation of the Massachusetts Institute of Technology campus during the 1990s under the leadership of its former president, Charles M. Vest.

“I’ve looked at and studied many campuses,” Daas said. “I think this is one of the most extraordinary experiences. And I think that should be borne in mind as we think strategically about the direction of the campus. I’m very, shall we say, inspired by some of the new buildings and master planning that has happened here.”

Before arriving at KU, Daas chaired the Department of Architecture at Ball State University in Indiana and served two years as its inaugural Emerging Media Fellow at the university’s Center for Media Design. During that time he also earned his doctorate in higher education management from the University of Pennsylvania.

Although he’s originally from India, Daas said coming to KU is a sort of homecoming for him. He earned his master’s degree in architecture from Kansas State University and served as an assistant visiting professor there in the 1990s. He also spent two years as a design associate at the Kansas City, Mo., firm of Gould Evans Goodman Associates.

Now at KU, Daas plans to put many of the concepts and tools of architecture, design and planning to work on the school itself by trying to figure out what its mission should be in a rapidly changing industry, and how it should be laid out and organized to accomplish that mission.

Daas succeeds Dean John Gaunt, who led the school more than 20 years. During that time, the school grew dramatically by, among other things, absorbing the Department of Design from the School of Fine Arts.

Although it is headquartered in Marvin Hall, an iconic early-20th century building on Jayhawk Boulevard, the school is now spread across six different buildings in Lawrence alone, and has additional sites at the Kansas City Design Center and the Edwards Campus.

“Although the programs began here a hundred years ago as architecture programs, and then it became a department and a school, now we are substantially different in the sense that we have three departments — architecture, design and planning,” he said. “Design was added six years ago. That has transformed in many ways our operations, identity and all of that. So there is some level of distribution — we might even call it fragmentation — because of this growth and accretion of the programs,” he said.

Daas said his first goal is to understand what he calls “the DNA of this place.”

“This is where we are looking into and asking questions of identity, the intellectual legacy that the various departments have had,” he said.

“The next question is to be able to understand, what is the world we are operating in today?” he said. “This is not what it was when I came to Kansas 25 years ago. So how do we now educate students differently? How do we connect with the communities, industries and professions differently? What does globalization mean to us? What is the role of technologies? And what are the kinds of environmental changes and challenges that we must take into account in what we do?”

Daas said it’s important for the school to do that now, in light of how much the industry has changed since the Great Recession hit seven years ago. Because that recession was driven by a crash in the real estate market, it had a profound impact on the business of architecture, planning and design. And he said that is driving changes in how schools of architecture train students.

“It is not the world before, where we think we are preparing them to work in a corporate environment only,” he said. “How can we, instead of just looking for a job, create jobs? So we are collaborating with the business school and the engineering school through the start-up initiative where our students and their students come together.”

And Daas said he can’t think of a better place to do that than at KU.

“We have a role to play,” he said. “And that is what is important to realize. We have a changed role, but it is a very significant role of innovation.”