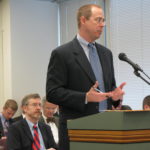 A group of state university faculty members says Art Hall is not one of them but rather an administrator, so — at least at Kansas University — he’s not entitled to academic freedom to hide his emails.

The Kansas Conference of the American Association of University Professors states its position in an amicus brief in the case of Art Hall v. the University of Kansas.

Hall is a lecturer and director of the Center for Applied Economics in the KU School of Business. He previously was chief economist for the Public Sector Group of Koch Industries Inc.

“There are some ranks of administrators who hold no academic status, are neither tenured nor tenure-track faculty, and have neither been nor are ever expected to be vetted by academic peers,” the Kansas AAUP’s brief says. “…it is abundantly clear that he (Hall) is an administrator and not a rank-and-file faculty member.”

After a KU student organization called Students for a Sustainable Future and its president, Schuyler Kraus, filed an open records request for Hall’s email correspondence, among other documents, Hall sued KU in late 2014 to temporarily block the university from releasing the records.

It’s now up to the court to decide whether the records should be public. The case is set for trial in November.

In higher education, the American Association of University Professors is generally considered the last word on academic freedom. In short, the association’s stance is that teachers must remain free to discuss, teach and research in their respective subject areas free from institutional censorship.

Ron Barrett-Gonzalez, KU aerospace engineering professor and immediate past president of the Kansas AUUP, said even though Hall does teach classes he is different from faculty and other nontenure-track lecturers at KU.

“Art Hall is a director, so in our opinion he’s very clearly an administrator,” Barrett-Gonzalez said. “He doesn’t report to any department chair; he reports only to an administrator, which is really worrisome to us.”

The AAUP has often supported protecting emails of faculty on the basis of academic freedom, but the Kansas Conference’s amicus brief argues that correspondence between an administrator and his “funding officer” or “agency” should be open for public review under the Kansas Open Records Act.

“This situation saddles a public institution with individuals whose very presence causes concern among the national academic community,” the brief says. “…some of these appointments have been given to individuals who are closely associated with wealthy individuals or corporate entities. While the funds that typically come with such persons are generally welcome by the university, the impression that KU has been ‘bought’ is catastrophic to its reputation.”

Students for a Sustainable Future has said it is motivated by transparency not politics, although it is part of a network of groups nationwide attempting to investigate the influence that brothers Charles and David Koch — conservative activist billionaires who own Wichita-based Koch Industries — have on academia.

Hall has argued in court filings that releasing his emails would violate his right to academic freedom because Students for a Sustainable Future is politically motivated and aims to “silence” his speech.

He also has argued that his emails aren’t subject to the open records act because he’s not a KU employee, as the center he directs is “self-funded” by donations through KU Endowment.

The KU School of Business does not consider Hall an administrator.

Hall reports to the Finance, Economics and Decision Sciences academic area director, School of Business communications director Austin Falley said. Falley said Hall is not an administrator; rather his appointment is “predominantly” a teaching appointment and he also runs the research center.

The Kansas AAUP shared its amicus brief with the Journal-World. According to Douglas County District Court records, the court granted permission for it to be filed on Friday.