Lions’ Bledsoe has handle on hype 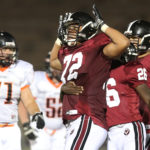 Lawrence High defensive lineman Amani Bledsoe looks to the student section as he celebrates a stop by the Lions against Shawnee Mission Northwest, Friday, Sept. 26 2014 at Lawrence High School.

Lawrence High senior football standout Amani Bledsoe knows some of the difficulties of being one of the top recruits in the country.

All of the phone calls and messages.

The time needed to build relationships with dozens and dozens of coaches.

Bledsoe admits it was tough to handle at times, but he has it under control. He cut his list of potential schools to 10 last week, listing Kansas University, Miami, Missouri, Nebraska, North Carolina State, Oklahoma, Oklahoma State, Oregon, TCU and UCLA as his semifinalists.

“It was just about time,” said Bledsoe, who plans to cut his list again in the next few weeks. “I mean, it was just getting too crazy. I narrowed it down so I could stay a little bit more focused.”

Bledsoe’s recruitment heated up last summer, when he stood out at college camps, earning his first scholarship offer in mid-June from Oklahoma State. Last season, he was the only player in the Sunflower League to earn first-team all-league honors on both sides of the line. He led the league with 13 sacks.

“Last year when it all started, it was pretty exciting,” Bledsoe said. “Then more and more schools came along, and I’ll admit, it did become a little hard to balance phone calls, home work and social life as well. That’s kind of led to me backing off a little.

“But, I mean, it’s a once-in-a-lifetime opportunity and process.”

Next week, Bledsoe will begin practicing for his final prep football season, and he’ll try to make the most the recruiting process. He plans to take an official visit to UCLA on Sept. 19 and to Oregon on Sept. 26.

“Those are the programs that I really liked,” Bledsoe said. “Not that I didn’t like the others — I like them a lot, too. But these are the ones that kind of stood out, and I just kind of zeroed on these.

“I’m pretty excited. I’m trying to go out there and figure out a little more about the programs. I have to figure out my other three (official) visits as well.”

Bledsoe attended KU’s practice Saturday at Memorial Stadium, and he has noticed a difference since David Beaty was named coach in December.

“Definitely. You just feel more energy, more enthusiasm with everything,” Bledsoe said. “It’s just something different and a little extra ‘oomph’ in the program.”

As Bledsoe figures out his future college plans, he has made one football commitment. He will play in the Semper Fidelis All-American Bowl on Jan. 3, 2016, at the StubHub Center in Carson, California. The game will be broadcast on Fox Sports 1.

Olathe North safety Isaiah Simmons, the No. 3 recruit in Kansas, was also selected to play in the All-American Bowl.

“I’m really excited, because we’re all seniors,” Bledsoe said. “It’ll give me an opportunity to play again with some of the best players across the world.”

Now that Bledsoe has cut his list and he’s starting to narrow his choices, he will take his time looking for the right fit.

“It’s pretty much me,” Bledsoe said. “I mean, my mom just wants it to be my decision in the long run. I just need to pick the best program for me for the next four to five years.”