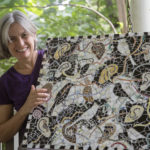 Lora Jost sits in Aimee’s Cafe on Massachusetts Street. She drains the last bit of tea from her steeping tea bag and sets the pouch directly on the table top.

Brushing hair from her face she reviews her online portfolio on the bright screen of a small laptop computer.

When asked why birds are so prevalent in her artwork, Jost looks over the top of her glasses, situated at the very end of her nose and replies, “They’re great metaphors.”

For Jost, 50, one of the roles of an artist in this world is to stimulate a dialogue and bring attention to issues dear to one’s heart. Birds, metaphors, mosaics, scratchboard and collages are just some of the tools of her trade.

Jost, a North Newton native, was introduced to art at a young age, and she and her brother both grew up to be artists.

“My mom was a preschool teacher, but she always had interesting things around for us to make stuff with,” she said. “And my dad was a musician. So they never discouraged us with the arts; they always encouraged us.”

Jost earned a bachelor’s degree from Bethel College in North Newton and a Master of Fine Arts from the University of Wisconsin at Madison. She moved to Lawrence with her husband in 1996.

Since coming to town, Jost has been involved with issues ranging from public school funding to historic districts, agriculture to sustainability.

“I think artists are starting to wake up to the idea that we’ve got maybe something to say or should have some responsibility to bring the conversation into the community,” she said.

Most recently Jost has been working with the Lawrence Ecology Teams United in Sustainability (LETUS) and the United States Department of Arts and Culture for a project culminating this spring at Lawrence’s Percolator to increase awareness about climate change.

“I try to work on issues that I feel passionate about, and I’m becoming more passionate about working on climate change. Lately it’s been kind of topping my interests, although it hasn’t always,” she said. “I never think of myself as an environmentalist, but what’s interesting to me about climate is the way the issue is related to pretty much everything under the sun, literally.”

Loewenstein and Jost worked together on the 2006 book “Kansas Murals: A Traveler’s Guide.” The work took them across the state, researching, photographing and writing about 90 public murals throughout.

The pair also collaborated with other community members on a 2010 project titled “Save Our Schools” aimed at keeping Cordley and New York Elementary schools open amid threats of budget cuts.

“We share a lot of points of views about the world,” he said. “Using your art to amplify issues dealing with social justice, equity and conservation is something Lora feels very strongly about, and we are the great beneficiaries of having her in the community.”

While Loewenstein said he doesn’t necessarily feel it’s an artist’s responsibility to call attention to social issues, he admits they have a platform well-suited to that purpose. And Jost’s work finds a fine balance on the matter, he said.

“She’s an expert craftsperson when it comes to using her skills to communicate complex ideas and make us think about them deeply,” he said. “She pulls no punches, and her work doesn’t suffer from being overly political or too dogmatic. It is still beautiful and has a sense of wonder to it.”

That sense of wonder or something left unsaid is just as important as anything else in an artist’s work, said Ben Ahlvers, exhibition program director for the Lawrence Arts Center.

“That’s the kind of artwork I respond to. It doesn’t tell me everything, and it leaves things to be explored, and I think Lora does those things in beautiful ways,” he said. “She uses beautiful imagery and pieces, and in some cases there’s another layer of a conversation within the work, and I think that’s one of her strengths.”

Sometimes Jost said artists never receive confirmation that their voices are heard. And quite often the overall message of a piece is left up to the interpretation of the viewer.

But not every piece of Jost’s work is meant to carry a political message, she said. Rather, most of her portfolio fits into at least one of her three major interests.

Jost said she also uses her art to stay in touch with the community and the world around her.

“For me, keeping at art for a long time has to do with being an engaged person,” she said. “For me, I need to have experiences with other people and not just sit around my own little studio in order to be inspired to make things, but also just to have a purpose, a meaning in life.”

Calling Jost a dedicated mother, wife and community member, Ahlvers said part of the attraction to her work is that she’s constantly creating and staying in motion.

“She’s a very active person and an active artist and she’s always making,” Ahlvers said. “Keeping your hands dirty is something I was taught in school by my professors. Keep making, keep working, and a lot will follow from that.”