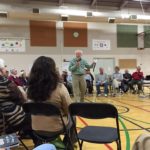 Toward the end of the third and final public art workshop discussing the Ninth Street Corridor Project, the word “gentrification” began to creep into the conversation.

The public meeting, hosted by local historian Dennis Domer, was held Monday night in the gymnasium of New York Elementary School. About 75 community members, city and business representatives gathered in the school to take part in a roundtable discussion on the history of East Lawrence.

The recent series of public art workshops have given the project’s design team, also in attendance, an opportunity to look to local residents for feedback and guidance on the project.

Those in attendance spoke of their childhoods in East Lawrence, ethnic histories and economic histories they shared.

Reverend Verdell Taylor of St Luke African Methodist Episcopal Church spoke briefly of African American history throughout the city, his experiences with community members and his own life in Lawrence for the past 20 years.

As a pastor of a predominately black church where many other ethnicities also are represented, Taylor said it was important for him to share a piece of the town’s history at Monday’s meeting.

“It’s also important because I’m a member of the community and I want to be totally involved in this community process,” Taylor said.

As the meeting drew to a close, one woman addressed Josh Shelton of the project’s design team. She asked him about transparency within the project and just how the stories shared would impact their planning process.

“When we say we don’t know how this information will be used, we truly don’t know yet,” Shelton said to the crowd. “I think we’re trying to slow burn this project enough to let some of this stuff digest, to talk about it amongst ourselves and to talk about it with you all.”

Part of the project’s process for transparency, Shelton said, includes meetings like Monday’s and the Citizen Advisory Committee Meeting at the school this Wednesday.

When confronted about the project’s potential to displace lower-income East Lawrence residents in favor of a more affluent population, or gentrifying the area, Shelton told the crowd that is not the team’s goal.

“We are not seeking to be a Trojan Horse for development interests,” he said.

The next Citizen Advisory Committee Meeting will take place at New York Elementary at 7 p.m. Wednesday.

A full schedule and more information can be found at lawrenceks.org/9th-street-corridor-project.