Turning heads: Inside Out exhibition a portrait of the entire arts community

Those walking by the Lawrence Arts Center recently may have noticed some eye-catching new additions to the building’s front windows: a trio of giant, 12-foot-tall faces.

The images represent only a fraction of the approximately 650 black-and-white portraits photographed over the last year by local artist Rachael Perry for the Lawrence Inside Out community photo project. 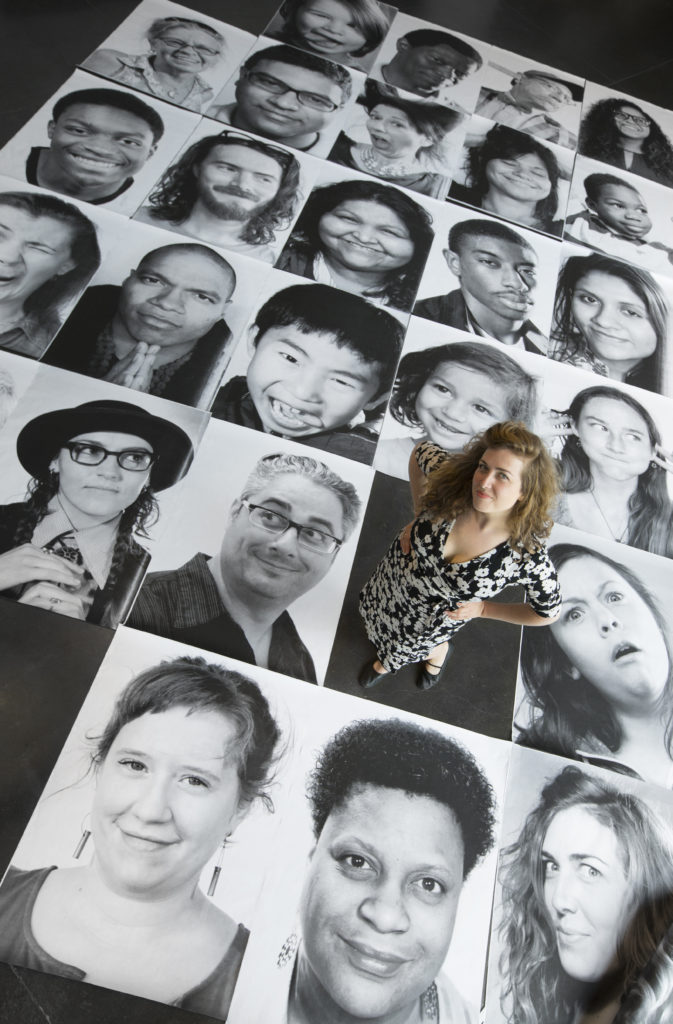 Lawrence photographer and artist Rachael Perry stands among a handful of the 650 portraits of local residents she photographed for the Lawrence Inside Out community photo project. Perry set out take black-and-white portraits of anyone who considered themselves part of the arts community.

The Lawrence Inside Out community photo exhibition kicks off from 5-9 p.m. Friday during this month’s Final Friday event. Over 650 portraits of community members will be on display through June 1. Portraits will be located at Lawrence Arts Center, the Percolator, Lawrence Public Library, Watkins Museum of History, the Lawrence Creates Makerspace, the Warehouse Arts District and downtown storefronts, as well as unnamed locations throughout Lawrence. 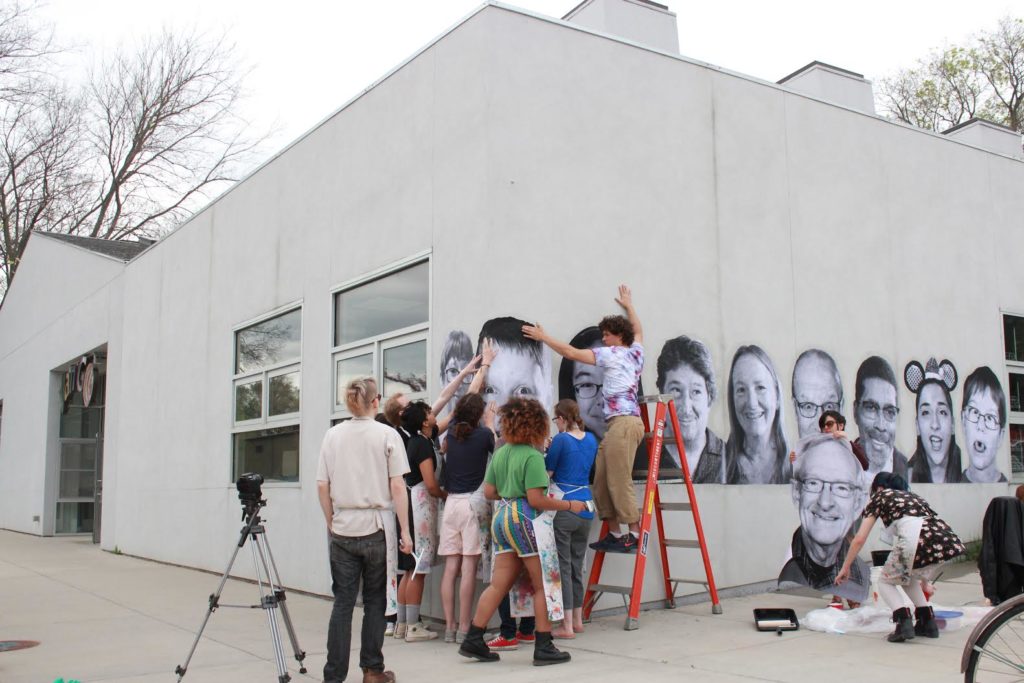 Youths at Van Go Mobile Arts, 715 New Jersey St., install photos for Lawrence Inside Out project on the exterior of the building during a workshop Friday. 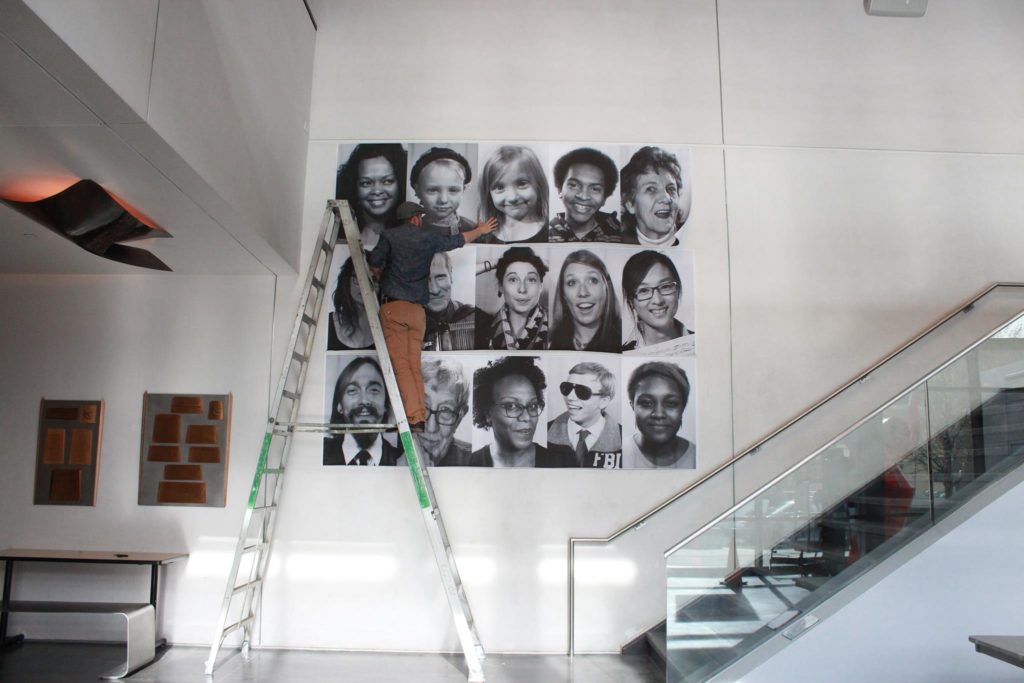 “I’m going for this grand-scale view of Lawrence, so to me it’s not, ‘Who has the most striking face?’ and more about, ‘What do all these faces and people say together as a whole?’ That’s why I enjoy seeing them like this,” Perry says, gesturing toward a 15-portrait collage hanging in the Arts Center lobby. “They not only are a cool image on their own, but they play off each other.”

The exhibition officially opens Friday, but the portraits have already started to pop up across town at various locations — in addition to the Arts Center, the Percolator, Lawrence Public Library, Watkins Museum of History, the Lawrence Creates Makerspace, and the Warehouse Arts District, and the old Esquina and Pachamamas storefronts, to name a few — in what Perry describes as a “big scavenger hunt.”

“It’s not secret, but there’s not going to be a map,” she says. “I think part of the fun is discovering them in all these different places.”

Inspired by the global Inside Out Project — which calls for black-and-white portraits that highlight a collective message — Perry set out in spring 2014 with a few simple questions: Who comprises the arts scene in Lawrence? What do those faces look like? And how does art play an important role in their lives?

Armed with a $1,200 grant from the Lawrence Cultural Arts Commission, Perry encouraged interested community members to schedule their portraits via the project’s website or Facebook page. She also set up portrait sessions around town where anyone could drop in.

The original idea was simply to let the portraits “celebrate the arts community” on their own. But Perry found that adding a quote from each subject about what art means to him or her gave some depth to the project.

As Lawrence Inside Out evolved, so did participants’ perceptions of art — and themselves.

Each interview was a “little intimate moment,” Perry says, with folks reminiscing about how their mother was a ballerina or how their father used to tinker with creative projects in the garage.

“I had a lot of people say, ‘I’m not an artist,’ but by the end of the conversation, they would be like, ‘Actually, I am an artist,'” recalls Perry, who says it was important to her to make each person feel comfortable during shoots. “I feel like part of the art of it has been listening. Listening to people and witnessing where they are.”

Originally, the goal was to take 300 portraits — a number that had more than doubled by the time she was done shooting portraits, Perry says.

Her grant from the city only left enough money to print 40 images, but the global Inside Out printed more than 200. Local donors — including Printing Solutions, Treanor Architects, Schurle Signs and Van Go, Inc. — helped take care of the rest.

She credits the project’s success, at least partly, to social media. The Lawrence Inside Out Facebook page, where participants and their friends and family can view and share the portraits, has more than 1,700 “likes.”

Perry still has “30 or 40” photos left to post, and it’ll be a sad day when there aren’t any left, she admits.

“I think I could have gone on forever, probably, with the amount of creative people around this place,” Perry says.

The portraits will remain around Lawrence until June 1, but Perry — along with graphic designer Deb Stavin — plans to catalog them in a book. Stavin offered to design the book free of charge after getting her portrait taken for Lawrence Inside Out.

For Perry, whose father’s career as a construction superintendent forced the family to relocate several times during her childhood, the project has only solidified her affection for her adopted hometown.

“That’s part of what’s made this project so poignant for me, because I didn’t grow up as part of a community per se,” she says. “I grew up with my family, and we were a close-knit family, but I never had the experience of being part of a greater community.”

As a teenager, Perry moved again to Topeka, but funky Lawrence — and its arts scene — “held sway” for her.

In high school, Perry and her friends would drive to Lawrence to busk along Massachusetts Street. Later, she chose to attend Kansas University, where she studied theatre and Spanish.

Perry had fallen in love with Lawrence and the people here.

“I’ve lived all over the country and I’ve traveled all over the world, but I’ve never found a place like Lawrence,” she says. “It’s so special. It’s always changing, but the heart of it stays the same.”