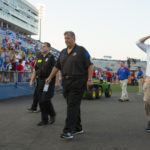 When he hired him in December of 2011, Kansas University athletic director Sheahon Zenger called newly named Kansas University football coach Charlie Weis “the right coach at the right time to help Kansas raise the bar and compete in the Big 12.”

The Journal-World has learned that Weis has been dismissed as KU’s head coach just 28 games into his tenure. KU confirmed the news that was first reported by the Journal-World in a news release shortly after 9 a.m.

Charlie Weis out at Kansas

Here’s a collection of links to our coverage of the firing of KU football coach Charlie Weis after two-plus seasons as the leader of the Jayhawks:

Weis becomes the second Kansas coach in the past four years to be let go before reaching the end of his original contract, which he signed in 2011 for five seasons at $2.5 million per year.

“I normally do not favor changing coaches mid-season,” Zenger said in the release. “But I believe we have talented coaches and players in this program, and I think this decision gives our players the best chance to begin making progress right away.”

Zenger continued: “I appreciate what Coach Weis did with several facets of our football program, but we have not made the on-the-field progress we believe we should. I believe new leadership gives our coaches and players the best chance to make a fresh start.”

After struggling to a 6-22 record that, at times, rivaled the futility of the failed two-year Turner Gill era that he was asked to move the program away from, Weis was done in by his inability to establish consistent progress, kickstart the offense and, of course, the results on the scoreboard.

According to a source, Weis has been relieved of his duties immediately and Kansas defensive coordinator Clint Bowen will take over as the interim head coach for the remainder of the season. The released confirmed that Bowen was named KU’s interim head coach.

Bowen, who grew up in Lawrence and played three seasons at KU in the early 1990s, has worked under four different KU coaches since 1996.

Weis’ dismissal comes on the heels of KU’s 23-0 loss to Texas on Saturday, the latest example of the KU defense keeping the Jayhawks in the game but the offense not doing enough to win.

It marks the first time KU has removed a coach during a season since Terry Allen was fired eight games into the 2001 season.

KU chancellor Bernadette Gray-Little also weighed in with her thoughts in the release: “As we continue to elevate the national stature of the University of Kansas, our pursuit of excellence extends beyond our research and instructional missions,” Gray-Little said. “KU alumni, students, fans and supporters expect that Kansas Football will match the other areas in which we excel as a university. After consulting with Dr. Zenger, I am in agreement that it is time for new leadership of our football program.”

During his 33 months in charge of the program, Weis brought more high-profile recruits to Lawrence than most who held the seat before him. However, very few of those players developed and many of them either left the program altogether or simply never panned out.

He heavily recruited the junior-college ranks throughout his time with the Jayhawks in an attempt to help bolster KU’s roster with more mature athletes who already had made the adjustment to college football, but he made bigger splashes with big-name transfers who earned five-star reputations in high school but never lived up to the billing in college, particularly at Kansas.

Quarterbacks Dayne Crist and Jake Heaps figure to go down as the poster boys for the Weis era at Kansas. Crist transferred to KU from Notre Dame for his senior season and was benched before it was over. Heaps followed Crist to Lawrence from BYU and also was benched by the end of his lone season of eligibility before transferring to Miami prior to the 2014 campaign.

After dismissing 29 players from the roster he inherited — a move about which he later said he underestimated the impact — Weis guided his first KU squad to a 1-11 season but cleaned up things in the areas of academics, the weight room and player accountability enough for some to believe progress was being made.

In Year 2, Weis and the Jayhawks finished 3-9, with the lone significant highlight coming when they snapped a 27-game Big 12 Conference losing streak with a victory over West Virginia that was led by true freshman quarterback Montell Cozart.

Cozart entered 2014 as the starter and Weis fired himself as offensive coordinator and brought in former KU assistant John Reagan from Rice to take over, but the offense has sputtered since the season’s opening quarter.

As recently as late July, Weis talked openly about his desire to stick it out at Kansas for several more years, saying, “I’ve got three years left on this (contract), so I think about five (more) years (at KU would be nice) because I’d like to be able to enjoy some of the success. What do you think, I want to just do all of the grunt work and then hand it off?”

Had the Jayhawks shown better progress in this season’s non-conference portion of the schedule and rolled into Big 12 play with some momentum, it may have played out that way. Instead, they survived a scare from Southeast Missouri State in the opener, were drubbed at Duke, 41-3, and knocked off Central Michigan by gutting out two touchdowns in the fourth quarter of a 10-10 game before being blanked by Texas on Saturday.

All four results left the KU fan base, several donors and supporters in a sour mood and further threatened the much-needed “momentum” that KU athletic director Sheahon Zenger has talked about needing in order to move forward with long-clamored-for stadium upgrades and renovations.

If you don’t count social media, nothing showed fan angst and apathy more than the mostly empty Memorial Stadium stands at the end of KU’s three home games so far this season. This, during a season that began with Weis asking for the fans to support the team in September and telling them he’d give them a reason to come back in October and November.

With KU having lost eight games by 30 or more points in the Weis era, and continually struggling on offense, the hope, inside the athletic department, is that the move to terminate Weis’ contract now instead of waiting until the end of the season will qualify as momentum in its own right.

As outlined in his contract, Weis will receive the full $7-plus million still owed him, however no details are available on whether that will come in the form of a lump sum or be paid out over the length of the contract.

Stay tuned to KUsports.com throughout the day and the coming weeks for the updates, reaction and the latest on KU’s third football coaching search in five years. 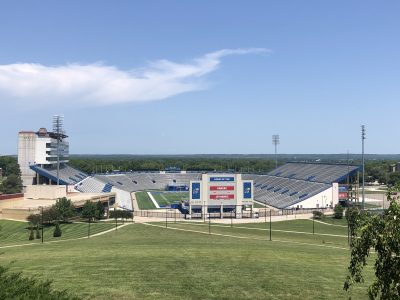