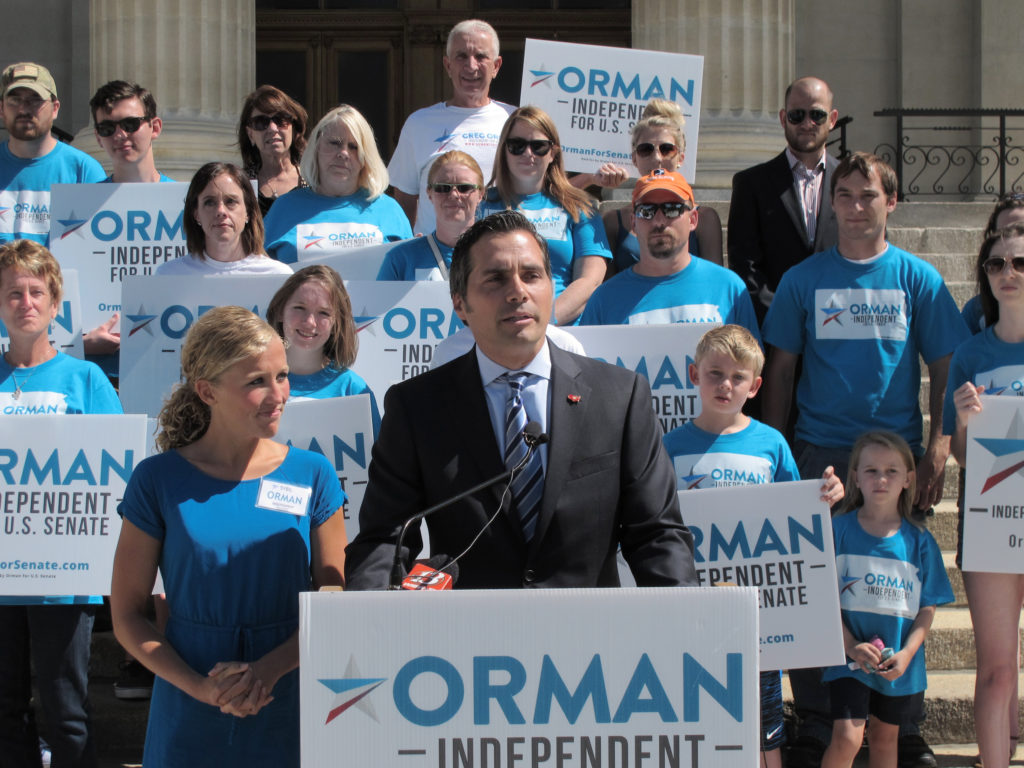 Greg Orman, right, an independent candidate for the U.S. Senate in Kansas, discusses his campaign during a news conference inJuly 2014, as his wife, Sybil, watches to his left on the south steps of the Statehouse in Topeka. Orman is portraying himself as the leading challenger for Republican Sen. Pat Roberts' seat.

Topeka ? Greg Orman might be one of the most improbable candidates ever to become a serious contender for the U.S. Senate in Kansas.

He’s a native of Minnesota who went to college in New Jersey and spent several years living alternately in Florida and Kansas — a geographical mixture that may account for his unusual accent that many listeners find hard to identify.

He also has never held public office, claims no party affiliation, and offers no resume of past leadership in any traditional civic or charity organizations that might serve as a base for community political support.

And yet, this Johnson County businessman who founded a venture capital fund that few people outside that industry have ever heard of now finds himself a viable candidate, maybe the frontrunner, in a campaign to unseat incumbent Sen. Pat Roberts, a Republican who has been a political institution in Kansas for more than four decades.

“I am asking a lot of voters,” Orman admitted during one exchange with reporters recently. “I’m asking Kansas voters to look at the position statements we make, look at the public statements I make, analyze the speeches I’ve given, come to our events, learn who I am. And I think when they do that, they’re going to learn that I am what I say I am. I’m fiscally responsible, I’m socially tolerant and I’m looking to solve problems for the American people.”

On immigration reform, for example, Orman has said he supports securing the border but believes undocumented immigrants now in the country should be allowed to pay a fine and, if they pay taxes and do not commit crimes, be given a pathway to citizenship.

He also supports allowing women the right to choose whether to have an abortion, saying on his website: “We’ve spent a lot of time over the last two decades debating whether or not women should have the right to make decisions about their own reproductive health.”

Orman was born Dec. 2, 1968, in Mankato, Minn. His parents later divorced, and Orman talks about growing up in a single-parent household with his mother, Darlene Gates, a registered nurse, and five siblings who shared one bathroom.

In 1971, his father, Tim Orman, opened a furniture store in Stanley, Kan., in southern Johnson County. Greg Orman says he lived with his mother most of the year and spent summers in Kansas with his father.

He graduated from Mankato East High School in 1987 and attended Princeton University, where he earned a bachelor’s degree in economics in 1991.

After college, he joined the New York-based consulting firm McKinsey & Co., and soon after that started his first business on his own, Environmental Lighting Concepts, which designed and installed energy-efficient lighting systems for commercial and industrial customers.

Orman sold that company in 1997 to Kansas City Power & Light and then went to work for the utility company to run its energy services operations.

In 2004, he helped found Denali Partners LLP, a venture capital firm, where he remains one of three managing directors.

According to documents on file with the Securities and Exchange Commission, Denali Partners is headquartered in Minnesota.

So far, little else is known about the company or its investments. Orman’s personal financial disclosure statement is due to be filed with the Secretary of the Senate within days.

Orman himself touts one of its investments. In 2012, it took over the troubled Combat Brands, a Lenexa-based distributor of sporting apparel, which at the time was on the brink of bankruptcy.

According to a recent Associated Press story, Orman and the company are now defendants in a lawsuit filed by Everlast World’s Boxing Headquarters Inc., which claims it is owed $30 million for merchandise and royalties.

Reporters digging into his business records have uncovered a few other details. Last week, the Topeka Capital-Journal reported that Orman maintains a “small” business partnership — he said worth less than $50,000 — with Rajat Gupta, a former board member of Goldman Sachs who is now serving a prison sentence for insider trading in an unrelated matter.

Asked at a news conference why he would stay in business with a convicted felon, Orman said it was a matter of friendship and loyalty.

“Rajat Gupta is a friend of mine. Ultimately, he made a significant mistake, and he’s paying the price for it,” Orman said. “In Kansas, when a friend makes a mistake, I don’t think you abandon them and run away from them.”

And the Wichita Eagle reported Orman has had business dealings with actress Debbie Reynolds, whom he met through a mutual friend, including a $1 million loan to help her start a memorabilia museum. Orman sued for repayment of the loan, but the museum filed for bankruptcy and the two parties reportedly settled out of court.

Orman moved from Johnson County, where he’d been living while working for KCP&L, to Florida sometime in 2003, according to voter registration records.

While living in Florida, he only voted once, in the 2006 mid-term elections. But he was a prolific donor to political campaigns during those years, giving mainly to Democratic candidates but also a few Republicans.

The Roberts campaign has noted that he gave the maximum allowed by law, $4,600, to both the Barack Obama and Hillary Clinton campaigns during the 2008 presidential election. He also contributed to the re-election campaign of Sen. Harry Reid, D-Nev., the current majority leader of the Senate.

But Orman also contributed to such Republicans as Scott Brown, who won a special election in Massachusetts to fill the unexpired term of the late Sen. Ted Kennedy. And he contributed to Missouri Rep. Todd Akin who, years later, made national headlines by saying victims of “legitimate rape” rarely get pregnant.

Orman says he now regrets having made that contribution.

In 2007, after moving back to Kansas, he filed to run for the same U.S. Senate seat he now seeks, but that campaign lasted only a few months. He pulled out of the race in February 2008, telling an AP reporter at the time, “the compromises necessary to be elected were unacceptable.”

Shortly after that, Orman founded the Common Sense Coalition, a group he says is geared toward people who do not feel at home in either major party. That group, with nearly 230,000 “likes” on Facebook, is also endorsing Democrat Susan Nunn for the Senate in Georgia and Republican Sen. Susan Collins of Maine.

It also helped lay the groundwork for Orman’s 2014 campaign as an independent candidate in Kansas.

Orman says he wants to get past the partisan bickering that he believes is blocking progress on issues such as the federal debt, immigration reform, and lowering the cost of health care and higher education.