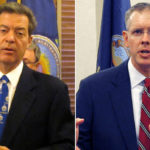 Democratic challenger Paul Davis rallied with dozens of teachers Tuesday to bolster his argument that Republican Gov. Sam Brownback has shortchanged Kansas public schools, while the incumbent’s supporters pushed back with data showing a rise in total education dollars.

The debate heading into the final week before the Nov. 4 election is an outgrowth of Brownback’s successful push for personal income tax cuts that cut the state’s top rate by 26 percent and exempted the owners of 191,000 businesses altogether. Davis contends schools pinched by a recession in previous years continue to suffer, while Brownback argues that both the economy and education are faring better.

A report last week from the Kansas Legislature’s nonpartisan research staff said total per-pupil spending on Kansas public schools has grown nearly 5 percent since the 2010-11 school year, when Brownback took office, from $12,656 per student to $13,269. But Davis and other Brownback critics contend such comparisons are misleading because the figures aren’t adjusted for inflation and don’t focus only on schools’ daily operating budgets.

Davis’ rally at the Statehouse with about 150 teachers and other supporters came after he kicked off a 30-stop tour by greeting voters on the town square in Iola in southeast Kansas.

Meanwhile, Brownback and other Republicans had rallies in Wichita, Pittsburg and Overland Park with Kentucky Sen. Rand Paul, a tea party favorite. The GOP planned to kick off a four-day bus tour Wednesday.

“It’s gone up, money being put in the classroom, every year that I’ve been in office,” Brownback told more than 200 people at the Wichita rally. “The leading function for us at the state level is education.”

Brownback’s race for a second, four-year term appears to be a toss-up with the election looming, and school funding is an important issue for the GOP moderates that Davis has wooed.

The new legislative research report shows increases in both total and per-pupil dollars for public schools over time, even with spending on buildings, equipment and teacher pensions factored out.

“Education spending per pupil has never been higher in the history of the state,” said Kansas House Speaker Ray Merrick, a Stilwell Republican. “But giving our students a world-class education means continuing to find ways to direct those dollars to the classroom.”

A Kansas Association of School Boards report posted online in August said when total dollars are adjusted for inflation they’ve remained flat during Brownback’s tenure. When spending only for classrooms and support programs was considered and adjusted for inflation, the amount dropped 6.1 percent.

“There’s no question the total dollars have increased,” said Mark Tallman, the report’s author and a lobbyist for the school boards’ group, which has not endorsed a candidate. “When you look only at the operating side of the budget, that hasn’t gone up as much. It tends not to have kept up with inflation.”

At the Davis rally, Brian Meredith, a social studies teacher at Washburn Rural High School in the Topeka area, said it was unusual six years ago for him to have his classes approach the school’s cap of 29 students. Now it’s normal, he said.