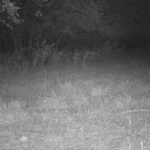 This photo from a motion-activated trail camera shows a mountain lion on a Labette County hunter's property early in the morning on Wednesday, Sept. 24, 2014. The Kansas Department of Wildlife, Parks and Tourism has verified the photo's authenticity and says it's the first confirmed mountain lion sighting in Kansas in nearly two years.

OSWEGO ? Kansas wildlife officials have confirmed that a big cat photographed by a deer hunter’s trail camera was a mountain lion.

The agency says it’s the 10th mountain lion verified in Kansas since 2007 and the first in nearly two years.

The Labette County hunter checked his camera and found a single image of a mountain lion walking down a trail, with its long tail prominently visible.

Most sightings in Kansas are confirmed with photos taken by motion-triggered cameras that deer hunters place near their stands. State biologists investigate each reported sighting.