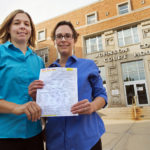 Angela Schaefer, left, and partner, Jennifer Schaefer hold an application for a marriage license at the clerk's office at the Johnson County Courthouse in Olathe, Kan., Wednesday, Oct. 8, 2014. They are due to obtain their license Tuesday, after the weekend and the Columbus Day holiday Monday.

The chief judge of the Johnson County District Court issued an order Wednesday clearing the way for same-sex couples to get married in that county. But a constitutional law professor at Kansas University said it’s still not clear that such marriages would be valid under Kansas law.

Meanwhile, the district court in Douglas County issued an opposite order Wednesday, saying the Kansas Constitution does not allow same-sex marriages and that so far no federal court has struck down the Kansas law.

“I’m disappointed,” said Thomas Tuozzo, a Lawrence resident who applied for a license to marry his partner of 20 years, Rodd Hedlund.

Tuozzo, a philosophy professor at Kansas University, said instead of going to Johnson County to get married, he and Hedlund will probably join the litigation being organized by the Kansas Equality Coalition to challenge the Kansas Constitution’s ban on same-sex marriage.

The contrasting court orders from neighboring counties came just two days after the U.S. Supreme Court refused to hear an appeal from a lower court ruling that struck down Utah’s constitutional ban on same-sex marriages.

That decision came from the 10th U.S. Circuit Court of Appeals, which also has jurisdiction over federal appeals in Kansas. And the language in the Utah Constitution limiting marriage to opposite-sex couples is similar to the language in the Kansas ban.

In Olathe, Judge Kevin Moriarty cited the 10th Circuit case in his order directing the clerk of the court to issue marriage licenses to all individuals, “including same sex-individuals, provided they are otherwise qualified to marry.”

Angela and Jennifer Schaefer, of Gardner, applied for a license Wednesday shortly after the Johnson County order was given. The two have a 9-month-old son, and Schaefer said she believes getting married will ensure that she has full parental rights.

But in Lawrence, Chief Judge Robert Fairchild reached the opposite conclusion in his order, which was prompted by Tuozzo’s and Hedland’s application for a marriage license.

“The Court’s role in administrative matters is to apply and follow the existing laws of the State of Kansas,” Fairchild wrote. And while he acknowledged the 10th Circuit decision, he said “none of these cases involved Article 15, (section) 16 of the Kansas Constitution.”

“This court may not make a determination as to the validity of this constitutional provision without a judiciable case before it concerning the court’s issuance of or failure to issue a marriage license,” Fairchild wrote.

Since Monday’s ruling by the Supreme Court, same-sex couples have been applying for marriage licenses in several counties, most of the time knowing they will be denied. The Kansas Equality Coalition, a gay rights advocacy group, has said it plans to work with the American Civil Liberties Union to file a direct challenge to the state’s ban on same-sex marriage.

But because the Supreme Court did not directly rule on the issue — it declined to hear the appeals of five similar cases from various judicial circuits — some experts say courts in other states have not been given clear direction on how to proceed.

“If I were advising a client, I would say as much as you want to get married, it might be risky to rely on this (Johnson County) order as the basis for your marriage license,” said Rick Levy, a constitutional law professor at the KU School of Law.

Levy said he doesn’t believe it’s clear that Judge Moriarty had the legal authority to effectively declare the state constitutional language invalid without a case or controversy before the court challenging that law. And until there is such a ruling, he said, there’s always a possibility that any marriages performed in Johnson County pursuant to that order may later be declared invalid.

“Until such time that a valid court order is in place that modifies the (law), there’s also no basis for issuing the license,” Levy said.

Gov. Sam Brownback, a conservative Republican supporting the gay-marriage ban, said Tuesday that the state ought to defend it in court because the constitutional provision was enacted through a statewide vote.