Lawrence police officer Sutagee Anglin talks to Haskell Indian Nations University students about the process of taking a person into custody who has been accused of rape. Haskell students Anthony Tarin, background left, and Malvina Begay, right, participated in a skit illustrating the process followed by Haskell and law enforcement when a student reports being raped, as part of Haskell's End the Violence symposium. 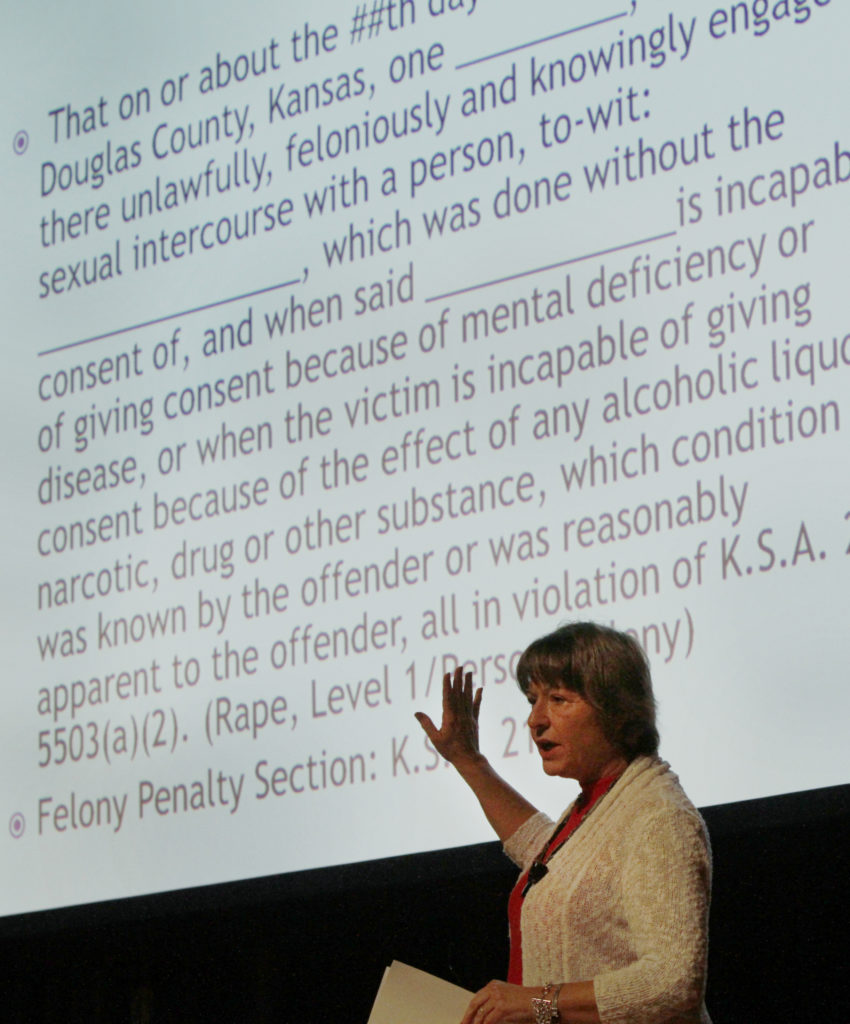 More American Indian and Alaska Native women have been raped than any other specific race, according to this year’s White House report on sexual assault. Overall, the report says, few rapists are strangers.

There aren’t many violent crimes reported at tiny Haskell Indian Nations University. But school leaders say the culture of sexual and domestic violence — and reluctance to report — that many students encounter back home does find its way to campus.

Haskell has increased its focus on Title IX this year and hopes complaint investigations and awareness efforts can make campus and all of Indian Country safer.

“A lot of these students that come here do come from backgrounds where violence is a lot more prevalent,” said Haskell student rights specialist Danelle McKinney, who investigates Title IX complaints at the school. “We want to be able to educate them to say this is not acceptable. And as future tribal leaders, we want them to carry that message back.”

Haskell students, who must be members of federally recognized tribes, come from all over the country. The school’s current enrollment is about 800, with about 650 students living on campus.

With political and media attention on campus sexual assaults this year, McKinney said she expects reports to go up as awareness has increased.

So far in 2014, she said, Haskell has had four “dating violence” crimes reported, but no sexual assaults.

Alicia Gangone, a senior from Sisseton, S.D., organized the school’s third End the Violence symposium in October. She said it’s hard to guess how many Haskell students have been sexually or physically assaulted but haven’t reported it to law enforcement or the university.

Gangone, a member of the Sisseton-Wahpeton Oyate tribe, said back home her grandmother worked in a domestic violence shelter and her stepmother was a victim advocate. She knows asking for help is hard for many Indian women.

“We’re taught to be the stoic woman,” Gangone said. “We don’t want them to see us as weak.”

Haskell’s day-long symposium featured speakers, traditional Indian “talking circles” and a skit showing the process the university and law enforcement go through when a student reports a sexual or other assault. Victim advocates and resources were included.

“Especially as a Native woman, I feel it’s important that people become aware of who they can turn to on campus,” Gangone said. “Hopefully it won’t be such an inside struggle.”

There’s a stereotype that Indian men and women alike have to be tough, said senior Anthony Tarin. Unfortunately, that can lead to violence committed by both sexes.

All students need to understand what constitutes rape or domestic violence and think about the consequences, said Tarin, a Gila River Pima tribe member from Phoenix, who portrayed a male student accused of rape in Haskell’s symposium skit.

“We have to prevent it from happening,” he said. “And if it is happening, how can we get them help?”

Haskell is prepared to handle investigations of campus sexual assault and adequately handled its last one, in 2012, McKinney said.

She said staff underwent additional training this year to further refine the school’s response to sexual and domestic violence complaints.

Title IX is a federal law prohibiting sex-based discrimination in education. Among other things, it requires schools to eliminate and prevent sexual and intimate partner violence on their campuses.

Haskell follows the same laws as other universities when it comes to investigating Title IX complaints on campus, plus another federal law that governs Indians.

Title 25 of the Code of Federal Regulations applies whenever law enforcement or emergency medical personnel are contacted about an on-campus incident, McKinney said. In those cases, which include rape and serious physical violence, Haskell must suspend alleged perpetrators from campus right away and give them a hearing later.

In Title 25 situations, McKinney said, “we don’t mess around.”

McKinney said Haskell made strides this year to better support victims in the investigation process.

“In the past our office was really focused on the perpetrator,” she said. “We didn’t really think about the victims.”

Now, she said, a victim who reports being assaulted is immediately connected with the staff counselor on call. That counselor acts as “eyes and ears” by asking victims what they need, connecting them with therapy or other community resources, and arranging for schedule changes or other measures to ensure they feel comfortable on campus.

For students whose violations don’t land them in jail — and that’s the majority of them, Adams said — an educational diversion program through the district attorney’s office and Haskell’s weekly alcohol support group meetings can make a big difference.

“I follow up with them,” Adams said. “They get a chance to look inside themselves and really find out what makes them tick.”