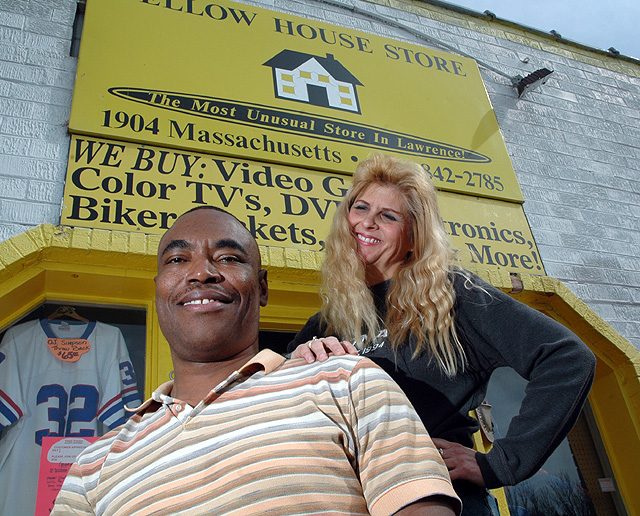 Guy Neighbors, pictured here with his wife, Carrie Neighbors, in a Journal-World file photo, had an indictment dismissed by a federal judge this week.

Originally indicted with his wife, Carrie Neighbors, in a 2007 federal complaint, Guy Neighbors’ indictment was dismissed this week by U.S. District Judge Carlos Murguia, who said the multiple delays in proceeding to trial violated Neighbors’ constitutional right to a speedy trial.

Prosecutors charged Neighbors and his wife in 2007 with multiple counts of wire fraud, conspiracy and money laundering and accused the couple of selling stolen goods from their former second-hand store at 1904 Massachusetts St. and on eBay. Carrie Neighbors was convicted by a federal jury in 2010 and is serving an eight-year prison sentence in West Virginia.

But when Guy Neighbors was found incompetent to stand trial and ordered hospitalized in 2009, his case was put on hold for almost three years. Murguia wrote that at least some of Neighbors’ time in custody could have been prevented had he been transported more quickly to undergo voluntary medication. Murguia also wrote that Neighbors should have been taken to Leavenworth instead of North Carolina to be closer to his wife, who stood trial in Kansas City, Kan.

Neighbors was released on bond in September 2011, but his case was again delayed for nearly two more years when his lawyer suffered health issues. Murguia said that delay was outside all parties’ control. But in calling all of the delays in the case “excessive and oppressive,” Murguia found enough factors to weigh in favor of a constitutional violation. He said Neighbors’ ability to present his defense was impaired and that he still had no closure more than six years after the indictment.

Neighbors said that, while fighting the charges, it was difficult applying for jobs. But he eventually found work at a local Kia dealership. “Without that opportunity I don’t know where I’d be,” he said. Neighbors said he is now asking for the return of evidence seized during the investigation, including two laptop computers. He is also asking for an investigation into the Lawrence Police Department’s handling of the investigation before federal prosecutors took over the case.

“I have no hard feelings,” he said. “If you have hatred in your heart it takes up the space for love.”