Lawhorn’s Lawrence: Can’t wait to get on the road again

We’ve all been there. 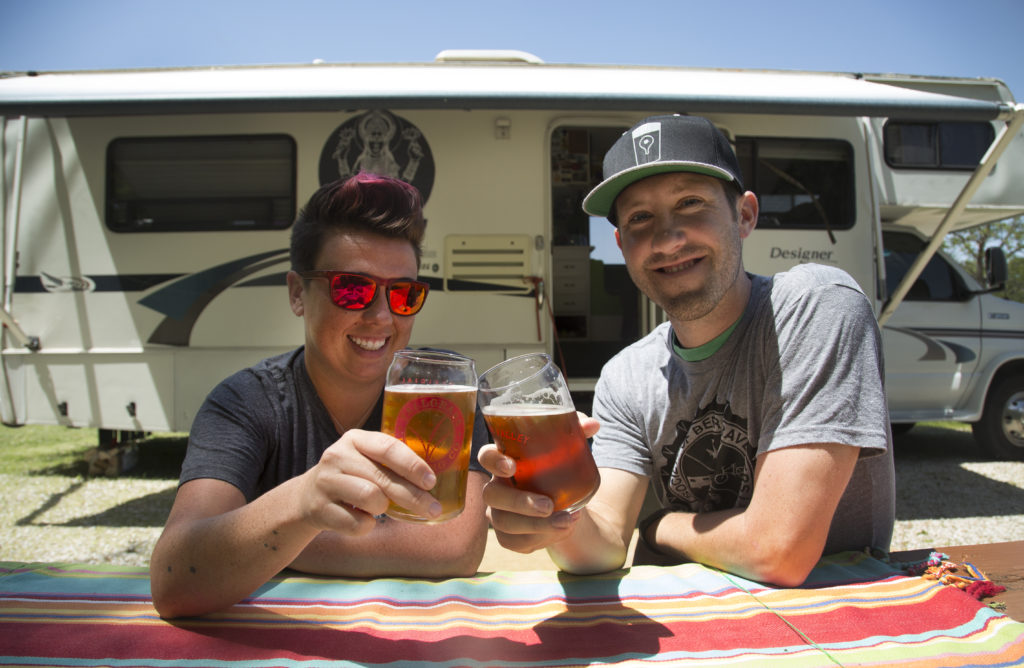 Maria Scarpello and Brian Devine lead an unusual lifestyle, traveling in their motor home and writing about craft beers. 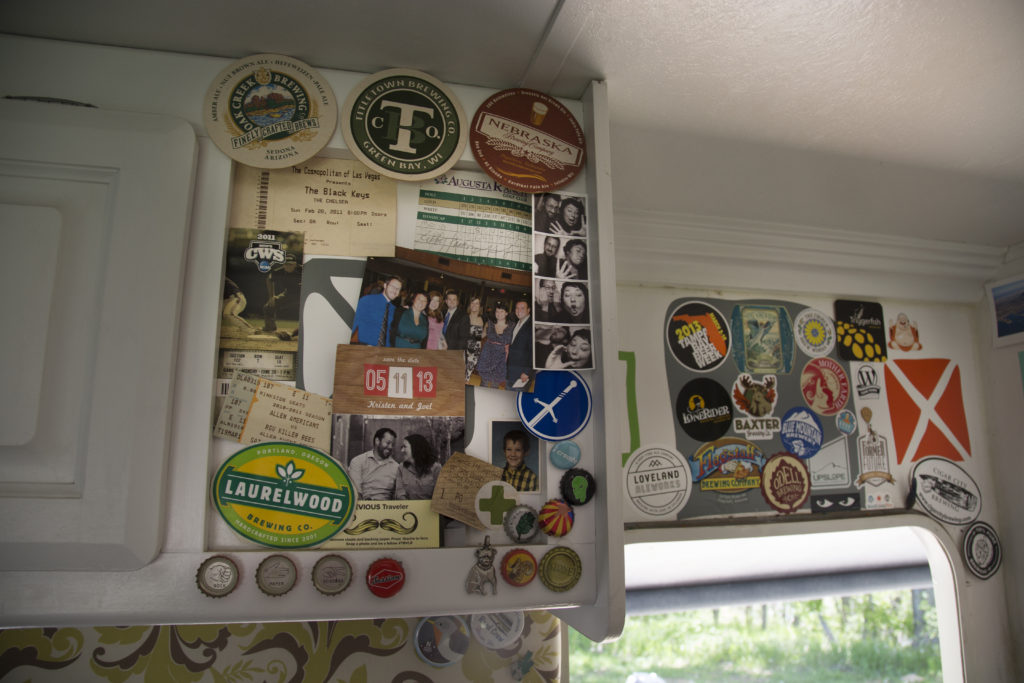 Maria Scarpello and Brian Devine's RV is wallpapered with beer labels from the many places they've traveled.

It is March Madness time in Lawrence, and, except on the rarest of occasions, it never ends well. Those who bleed Crimson and Blue know that sometimes the real madness begins after the final buzzer on that final defeat of the season.

The couple’s blog about craft breweries can be found at TheRoamingPint.com. They often mention that their favorite brewery is Lawrence-based Free State Brewing Co. The downtown brewery recently collaborated with Scarpello and Devine to create The Roaming Pint Black Ale. The brewery tapped the first keg last week as part of American Craft Beer Week.

For Maria Scarpello, it was the NCAA Tournament of 2010, and No. 1 seed KU had just suffered a heartbreaking second-round loss to Northern Iowa.

“It was a horrible night,” Scarpello recalls.

But a friend of hers already had a plan to dull the disappointment. He was packing up his motor home and taking a three-month trip to some national parks.

Since then, Scarpello and her longtime partner, Brian Devine, have been to 40 states, 376 breweries and enough fairs, festivals and concerts that it has become burdensome to keep track.

Now, it is not uncommon to find the Lawrence couple stopped at a fork in the road with no particular plan, no particular direction in mind. They use a coin-flipping app on their smart phone. Heads right, tails left.

“That’s how we ended up in Charleston,” Devine says.

Wait a minute. Maybe we haven’t all been there.

Scarpello and Devine still call themselves Lawrence residents, but it is all relative at this point. Most years, they are back in town for just a few weeks — basically long enough to play in one of the leagues of Lawrence Parks and Recreation softball.

The rest of the time, it is Maria, Brian and Stanley on the road. Stanley is the name of their 1999, 29-foot, Ford Jayco motor home. (Named Stanley — no offense to those who share the name — because it sounded like an old man’s name, and the motor home often was cantankerous like an old man when they began to fix it up after buying it for $10,000 in 2010.)

Frequently, you also may find them at a beer bar or a craft brewery. No, it is not that they are just really thirsty. The couple operate a popular craft brewing blog called The Roaming Pint. They write reviews and travel tips for those who like to plan their journeys around beer. The blog pays a few bills — mainly beer tabs, Devine says — but both Scarpello and Devine have other jobs as well. Scarpello is in corporate communications for a web-based company. Devine is a web-based designer.

Sometimes, you may find them cussing the hot-water heater.

“You have to remember to turn the hot-water heater on at least 10 minutes before you want to take a shower,” Scarpello says of one of the bigger adjustments she’s had to make since giving up her Lawrence duplex for motor-home living.

Other times you may find them tidying up this or that. 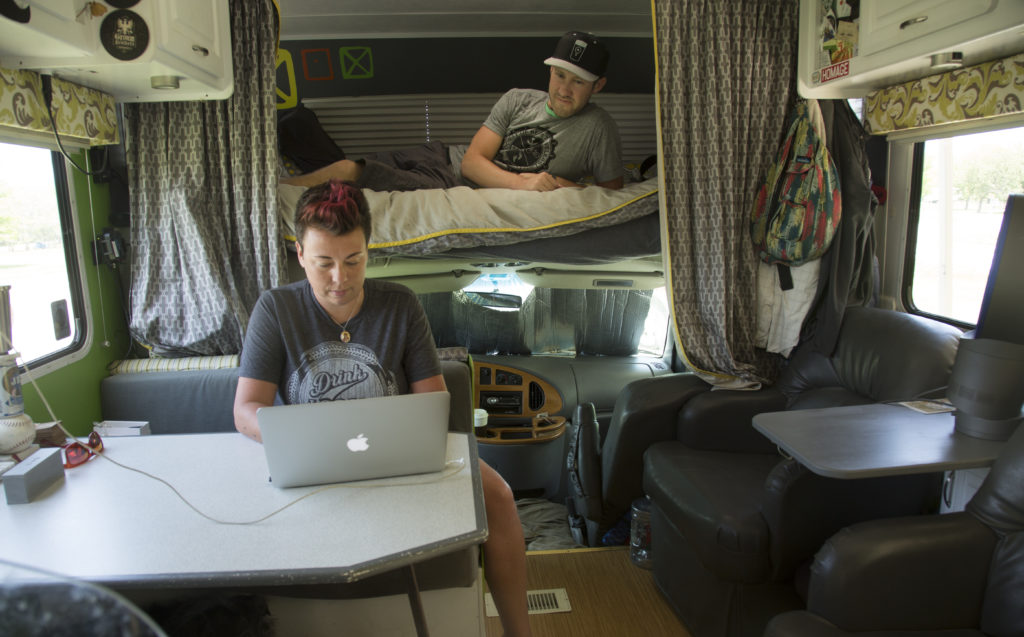 “It is like your house is always in an earthquake when you are moving,” Scarpello says.

Perhaps you are like me and think you often would find the two at each other’s throats. After all, 29 feet only stretches so far. But both say that’s pretty rare.

“I tell people I have a really big yard,” Devine says.

Perhaps you think you would find them broke. Stanley only gets about 10 miles to the gallon on a good day. Often the couple will stay in a campground if they are going to be in a single location for a few days, but many times they sleep overnight in the parking lots of Walmarts or other businesses that welcome RVs. They insist that they don’t spend any more on fuel and camping fees than they would on a mortgage or utility bills.

Where you probably won’t find the couple is in the same place — at least not for very long.

“It is hard to get complacent,” Devine says of one of the things he likes most about this life. “If you do, that’s probably the sign that it is time to move on.”

When this started, it was just to be for a few months.

“We originally were looking for a new place to live,” Scarpello says. “Now we realize we can live five or six places a year. It is a lifestyle that works for us.”

How long will it work, though? The couple — they are each 31 and have no kids — don’t know. They do have one rudimentary barometer, however. Their bed is above the cab of the motor home.

“When we can’t climb into bed anymore, we may have to do something different,” Devine says.

But this lifestyle has given them lots of things, including the freedom of not having to answer such questions about the future.

“In the beginning, we were always planning everything,” Devine says. “Where we were going to park, what we were going to do. We realized all that planning was pretty stressful. We figured out that we can wing it.”

Such freedom from planning has opened up a world of happenstance, they say. They travel a lot of back roads because Stanley really doesn’t like 65 miles per hour. Scarpello, who grew up in Nebraska, says even driving through her home state she notices all types of beauty that previously just passed her by.

“And we have a ton more friends than when we started,” Devine says.

You meet so many people when time doesn’t tell you that it is time to go.

Devine estimates they’ve met about 40 other young couples who are living the same type of life on the road. Some are travel bloggers, but others just are taking advantage of the technological age that allows so many people to work from anywhere.

“Not everyone’s occupation is set up for this sort of thing,” Devine says. “But there are a lot of people who could do it but don’t. It probably is just a fear of the unknown, or some mental roadblocks. I get that.”

Neither Devine nor Scarpello is evangelistic about the lifestyle. They get that it is not for everyone. But Scarpello doesn’t like to hear about how people want to do it but don’t.

“If you want it to happen, it can happen,” she says.

So, there you go? Shall you grab the keys? Pack a bag? There’s freedom out there. But there are also cold showers, beds with steep ladders, and, for fellows like me, the fear that while you are out enjoying your big yard that your better half will move the house on you.

Go back to when this started: March Madness. You have to consider it may be madness to pack up and leave so much behind. Then again . . .

“I just know,” Scarpello says, “that you don’t want to wake up one day and be 65 and then croak right when you are ready to retire.”

Maybe it is madness to wait.