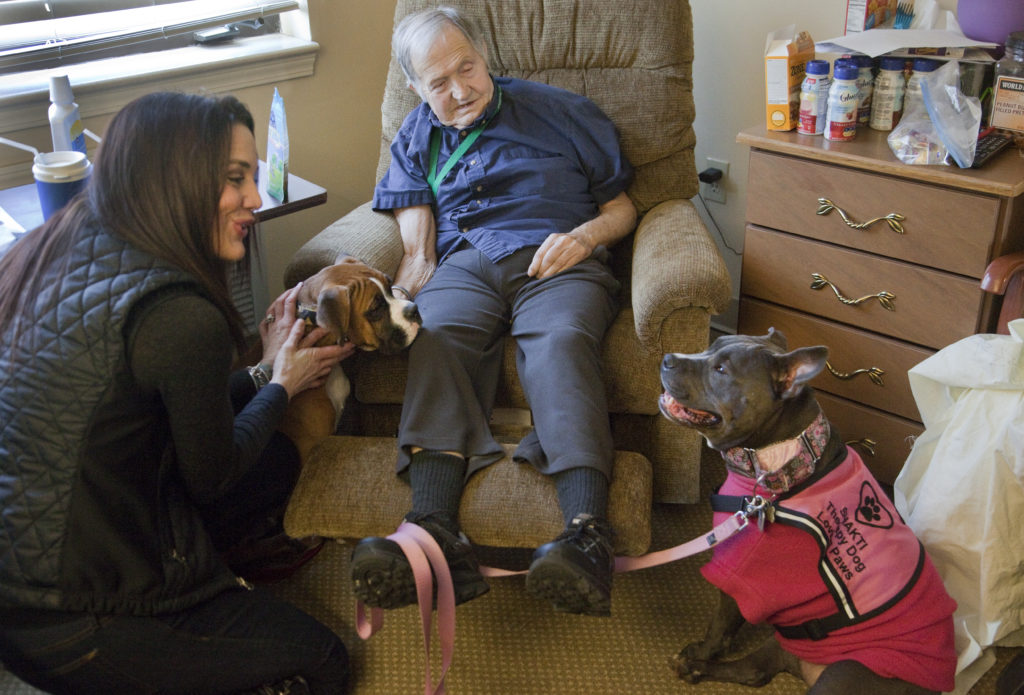 It’s an unseasonably warm March afternoon at Brandon Woods at Alvamar retirement community, and resident Marion Counts, 79, is in his room doling out snacks to a pair of hungry dogs.

Brahma, a 6-month-old Boxer and the more outgoing of the two, is the first to receive his prize. His sister, Shakti, at almost three years old, is a little more patient. The blue pit bull, a certified therapy dog, remains curled up under Counts’ feet and calmly waits her turn.

“Fat and happy,” Counts retorts with a smile, offering up another treat to the puppy.

Brahma and Shakti, along with their owner Rajani, are some of Counts’ most frequent visitors at Brandon Woods. The retired businessman suffers from Parkinson’s disease, diabetes and a rare heart condition. Once an avid outdoorsman, these days Counts spends more time at the hospital than outside hunting or fishing.

He misses being active, Rajani says, and he misses having a dog.

The healing power of animals

Loving Paws consists of 12 dog-and-owner volunteer teams and boasts a variety of breeds, ranging from muts to pit bulls to Labradoodles. Each team goes through a certification process under the supervision of professional trainers before joining the group. The program offers open-to-the-public training sessions, the first of which took place in January.

“We can learn a lot from dogs. They don’t sit and ponder and worry and stew,” Rajani says. “They’re just present. They are open and they embrace the moment.”

Research shows there are numerous health benefits to the visits, too. Rajani says interacting with animals reduces blood pressure, anxiety, stress and depression. And a recent University of Missouri study found that just a few minutes of stroking a dog causes a release of feel-good hormones including serotonin, oxytocin and prolactin.

Rajani, who is pursuing her master’s degree in clinical social work at KU, says her program offers a unique brand of healing to people like Counts. Loving Paws specializes in animal-assisted therapy, which is designed with specific goals in mind for each client.

“For example, if someone that I was seeing in Brandon Woods had a stroke and they started to recover and they’re having mobility issues, say, with their right arm, we can create exercises that incorporate Shakti,” she says. “It could be something like stroking the dog or throwing a ball for her. It engages them with the animal.”

Through sickness and in health

In Marion Counts’ case, Rajani says, the idea is to bring a bit of comfort to a man struggling with immense pain. Counts and his wife, Geraldine, ran an oil company together for several years before retiring and moving to Lawrence three years ago to be closer to treatment facilities and their daughter, Jackie. Their son, Curtis, remains in Russell, where the two met in the 1950s.

“He was very smooth looking, and he had muscles,” Geraldine, 72, reminisced of their first meeting at a dance. “And he’d always wear a white shirt on Saturday nights. That’s a thing of the past.”

A lot has changed for the couple over the past few years, Geraldine noted. After breaking his left arm in late January, Marion relocated from the Counts’ Brandon Woods town home to the facility’s health center to undergo physical therapy. His schedule includes three-times-a-week dialysis for his heart condition and almost daily trips to the doctor.

Watching her husband of 54 years endure the pain of a broken arm on top of everything else is “heartbreaking,” Geraldine says.

“Whenever there’s been a tragedy or something, he’s always been there for me, and I guess for each other,” Geraldine says to Marion, her eyes welling with tears. “Life changes. I mean, I always thought we’d die in Russell, but we’re not gonna do that.”

After feeding the dogs, Marion relaxes in his large, brown recliner, his sneakered feet propped on the foot rest. Sunlight peeks through the window blinds, illuminating a row of birthday cards on top of the armoire and the “Happy Birthday!” balloon brushing up against the ceiling. The mood in the room is tranquil, and even Brahma the puppy looks ready to doze off.

Geraldine is working on a quilt (she’s already made one for each of her five grandchildren; this one’s for herself) and reminds Marion about an upcoming family visit. A great-granddaughter, named after Marion, was born in August, but his illness prevented him from traveling to Colorado to see her. Now, she’s coming to Lawrence for a visit.

But today, he says, with Brahma and Shakti curled up at his side, isn’t too bad.