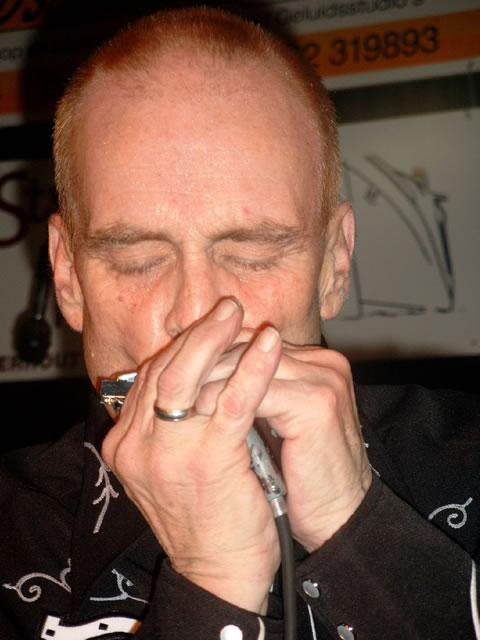 Friends of local blues artist Lee McBee say his heart was as big as his talent.

On the Facebook page for Lee McBee and The Confessors, bassist Patrick Recob wrote that McBee’s wife Carla “has asked me to tell you that they went swimming this afternoon at their local pool that they frequent and Lee died suddenly. The doctors said he went fast and painless.”

Musicians and friends from around the world mourned his passing.

Lawrence attorney and blues musician Pat Nichols said when McBee played the harmonica or sang “he could be totally present in the moment of the music.”

Nichols said that McBee connected with audiences like few others. “He was such a deeply emotional person and thoroughly in touch with his emotions,” he said. Nichols said McBee was the best friend he ever had and that just about everything he does on stage he learned from McBee.

Morgan added, “He was a great, great, great singer, great harp man, great front man. He just mesmerized people. He had a special gift. There are only a handful of people who could sing with that kind of raw emotion.”

Playing as Mike Morgan and The Crawl, Morgan and McBee made six CDs during the 1990s and played hundreds of shows including several trips overseas.

Morgan said he and McBee had recently discussed working on another record.

McBee was born in Kansas City and started singing as a child and picked up the harmonica as a teen.

He moved to Lawrence in the 1960s and started making his way in the music world playing with a number of bands.

Paul Gray, a jazz musician from Lawrence and the former owner of the Jazzhaus, said McBee played there often in the 1970s and 1980s. “He had a lot of fun when he played, so that fun and joy carried over to the crowds,” Gray said.

McBee and Morgan joined forces in the 1980s and 90s. “He was just a big ball of energy,” said Morgan of McBee. “He captivated people and enjoyed what he did.”

In recent years, he played frequently with his band Lee McBee & The Confessors at B.B.’s Lawnside BBQ in Kansas City. McBee was inducted in the Kansas Music Hall of Fame, which describes him as “one of the best harmonica players around.”

Nichols said McBee was the kind of artist who was revered on the national blues scene and generous with other artists, while not being a household name. But Nichols said that didn’t bother McBee.

“He was just a guy with an open heart and he would let you in and you wanted to let him in,” said Nichols.

No arrangements have been announced. They will be announced on the Lee McBee and the Confessors Facebook page.