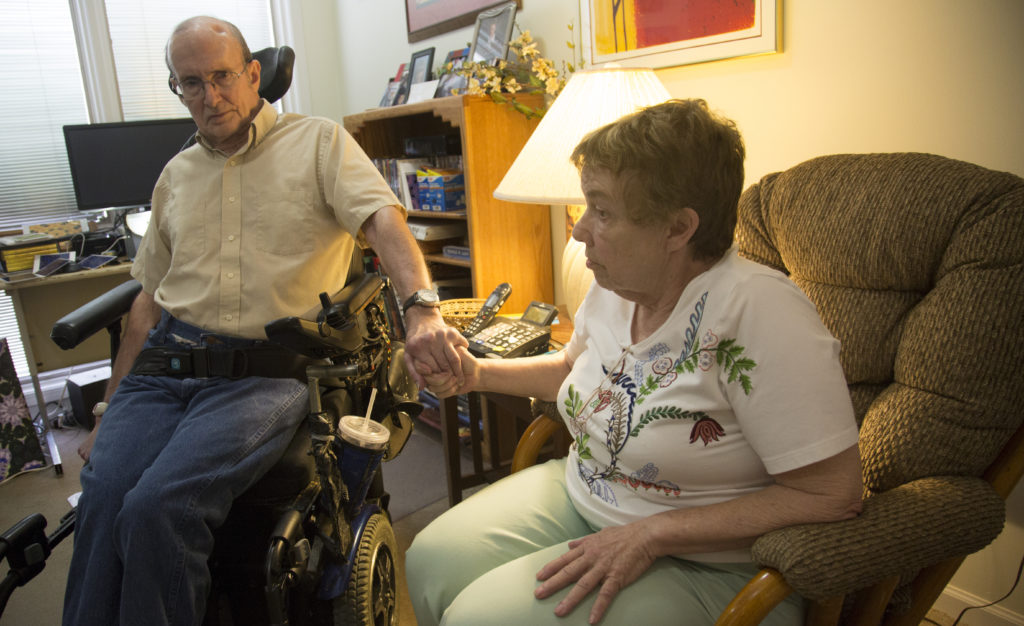 Ron Light sits with his sister Sue Richardson who spends a lot of time with Ron at Pioneer Ridge. Light moved from Albuquerque to Lawrence to be closer to his sister. 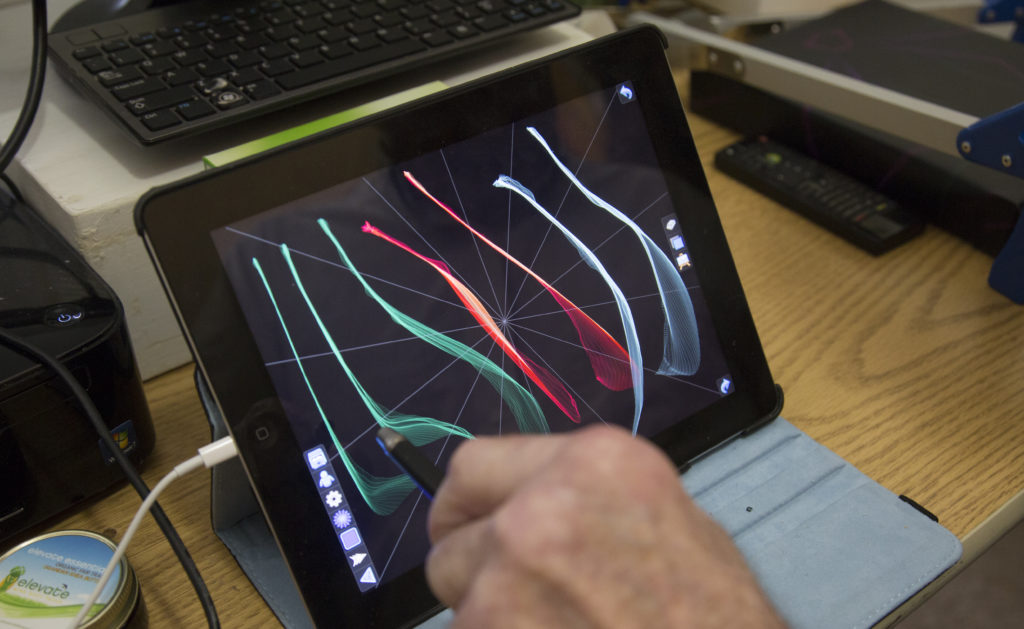 Ron Light was injured in an accident that left him with a brain injury and physical disabilities. He was a photographer for years before his accident, using photographs to make serigraphs. He still has the drive to make digital works with the use of an iPad. 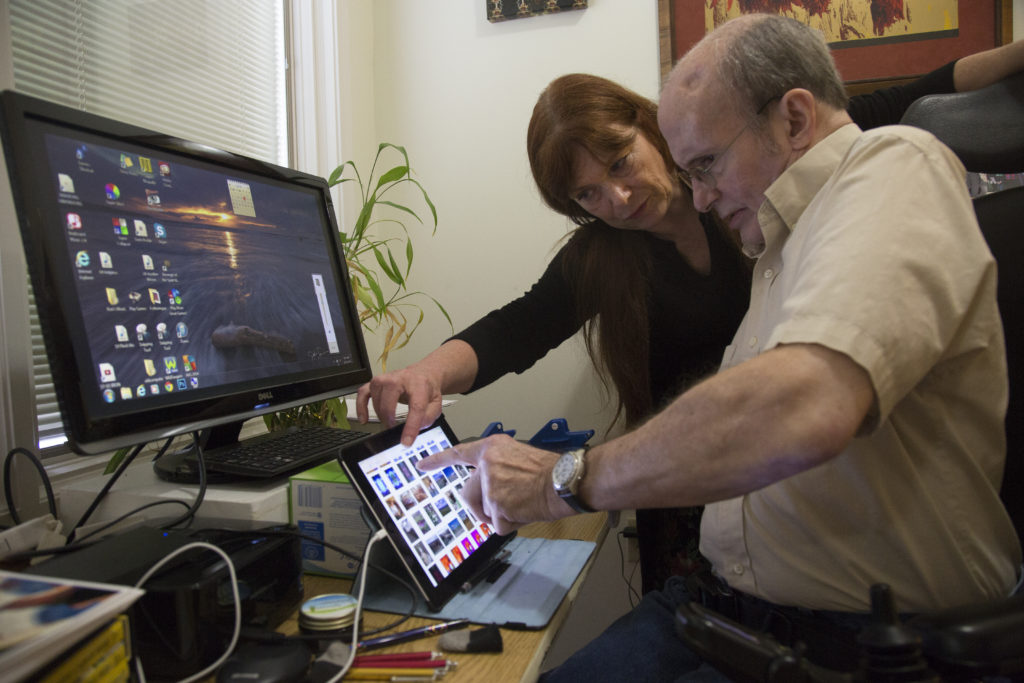 Ron Light was injured in an accident that left him with a brain injury and physical disabilities. Before the accident, Light found joy in photography and silkscreen printing. With the help of Robbin Loomas at the Lawrence Art's Center he's revisited art with the use of an iPad and applications. 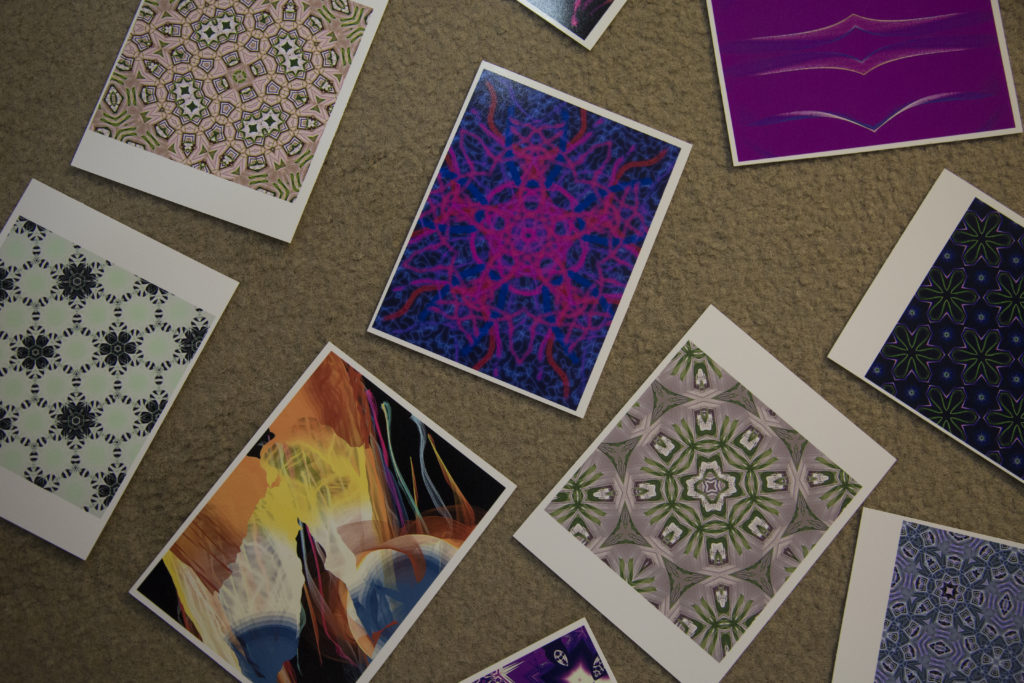 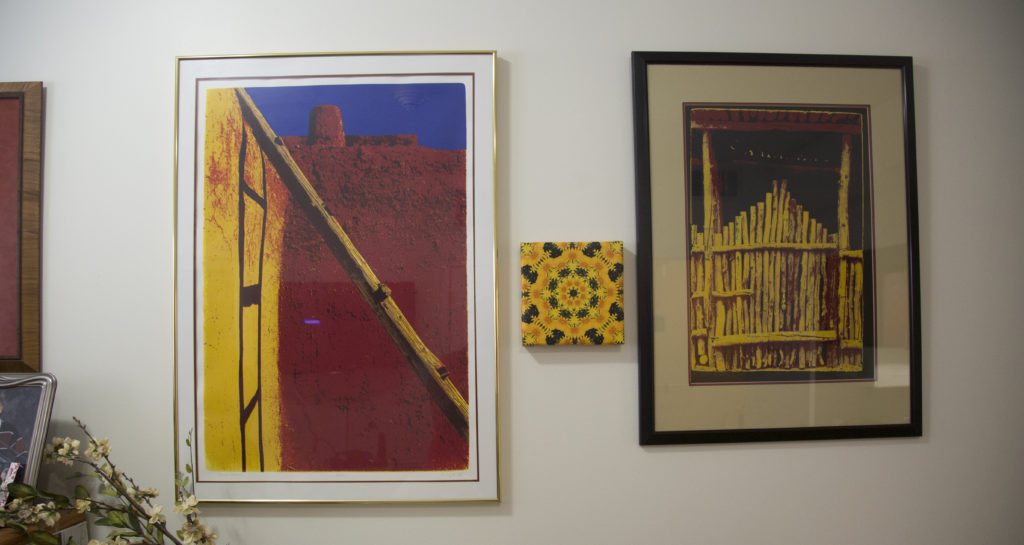 Ron Light was a photographer and serigraph artist for years before his accident, as some of his photos are on the walls of his Lawrence residence. 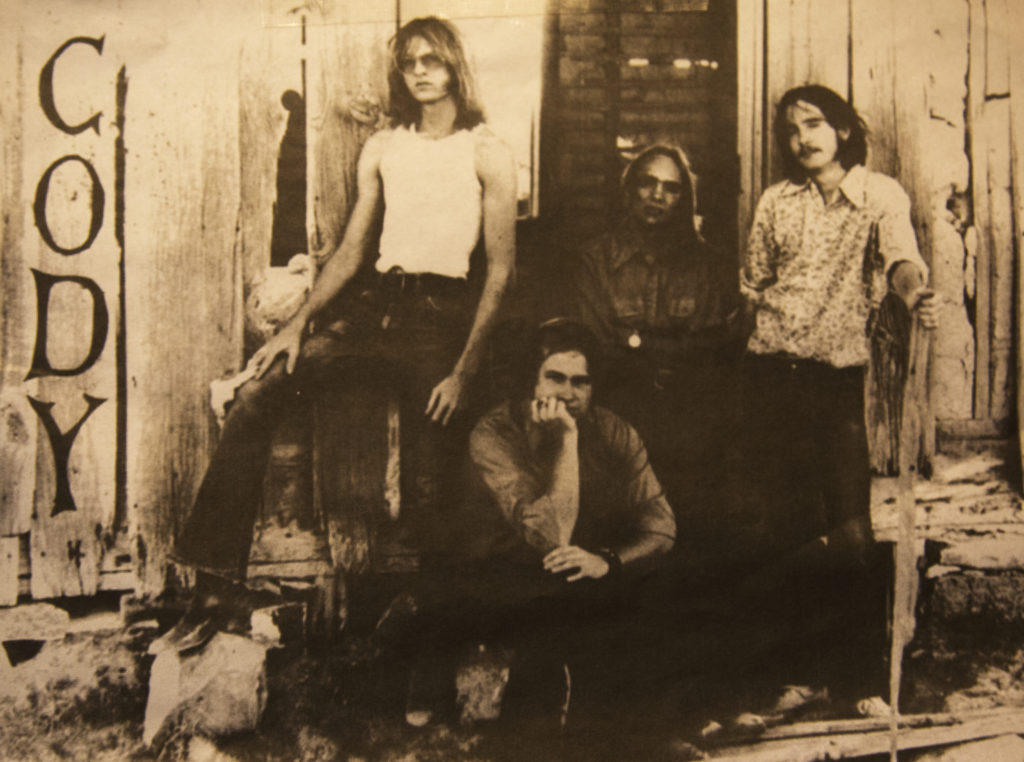 Ron Light, top right, as the guitarist and lead singer in a band as a young man. This photo is taped to the side of shelf in his room at Pioneer Ridge.

Sitting in his room at Pioneer Ridge assisted living facility, 63-year-old Ron Light taps on his iPad. Light opens the Kaleidoscope application and taps on an image he’d previously drawn (on the iPad) to make it large enough to fill the screen.

Soon he uses two fingers instinctively to contort the colors on the screen, bending the bold yellow print with a contrasting black background. It would seem as if he were just playing around with an iPad, sliding his fingers back and forth to test the waters, watching the colors swirl, but Ron is actually hard at work.

He zooms in on one small portion of the entire image and taps the screen again, locking this particular spot in place.

“It is good,” Light says deliberately, indicating that he’s ready to save this work, and grabbing a stylus to click on the screen to do so himself.

Onto the next one.

Light will usually have five or six new pieces to show his instructor, Robbin Loomas, digital art teacher at the Lawrence Arts Center, between their biweekly sessions, as his mind is always at work, feeding his compulsion to create. He’s produced more than 200 original works since he began in January.

On his desk are stock card print outs of countless rainbow-hued digital creations. Light sorts through the pile, pointing out his favorites — he gravitates toward a series of four blue-based works — and simply remarking that he enjoys certain patterns by touching the card and saying “good.”

“I love it,” he says of kaleidoscope designs.

The walls of his room display serigraph pieces, or silkscreen prints, in yellow, orange, red and royal blue created from photographs he used to take of Southwestern vistas before an incident that affected much more than his art.

It was 25 years ago this past May that Light and his family suffered an incredible loss.

On May 1, 1989, Light, then 37, went on a casual evening stroll with his wife Jane, 6-year-old daughter Rachel on bike, and 4-year-old son Chris in the Northeast Heights neighborhood of Albuquerque, N.M., where they lived. Bolting straight toward them was car being driven by paranoid schizophrenic Judith Ann Neely — off her medication and determined to kill someone that night.

Neely ran over Light and his two children with her 1987 Chevrolet, killing his daughter, putting his son in body cast, but missing his wife entirely, who watched her family bleeding out on the street.

After the incident, Light was in a coma for two months before waking up with permanent brain damage and inability to use his legs and his right arm. His speech was also greatly affected, and he is unable to speak more than a few words at a time.

“It amazes me that this man can have a positive attitude about life, and still search to find new ways to express himself, while he can’t do it with words,” says Light’s older sister, Sue Richardson.

Light was a full-time research project supervisor at Sandia National Laboratories in Albuquerque before the accident, having gotten his doctorate in organic chemistry from the University of New Mexico.

Part-time, he had been a serigraph artist. Only three years of work and his art hung on gallery walls: Weyrich Gallery in Albuquerque, Festival of Art in Corrales, N.M., and Ranchos Ritz in Ranchos de Taos, N.M. He became known for the sunset scheme colors on his silkscreen prints of landscapes, adobe walls and other scenes of the Southwest.

“He tries to blend in and not be obvious,” Richardson says of how Light has dressed his entire life. “And then he came out with these pictures with all this color, and everyone who knew him just about dropped their jaws and said that couldn’t be Ron.”

To ensure his wife could live a normal life without burden, he decided they should divorce; she has since remarried. After a bad fall in his home a year ago in Albuquerque where he lived alone, Light moved to Lawrence to be near his sister. He’s always been an optimistic, fun-loving guy, Richardson says, pulling out a photo of Light as the frontman in a band during his college years. He hasn’t lost that spirit, she says.

Richardson reached out to Robbin Loomas last winter to give private lessons to Light in the assisted-living care facility after he expressed interest to create art again.

Loomas teaches Photoshop, portrait retouching, digital painting, iPhoneography and iPad art at the Lawrence Arts Center. She had never before worked with a student with physical disabilities.

Over the past six months, they’ve worked together in biweekly lessons with five or six different apps, Photoshop and Loomas has shown him the skills to continue his craft in Denver, where he will be moving to live with his son, Chris, at the end of June for the first time since the accident.

“He is now looking forward to having a relationship with his father,” Richardson says about her now 29-year-old nephew. “They will have kids right away, and Ron is going to be the grandpa with a lap for them to sit on.”

Having printed out some of Light’s favorite works on canvas, Loomas wants to pick out the top 20 of his pieces in hopes of displaying them at Lawrence Arts Center. The next step is to find him a stand so he can set up his iPad and take his own photographs, and than use apps to alter them, say Richardson and Loomas. Full circle, he’d be even closer to his serigraph work.

“He is taking with him a gift, and it does my heart good that he has found Robbin,” Richardson says. “She has given him the tools to keep moving on in the art area.”