Artwork in the DNA of new library building 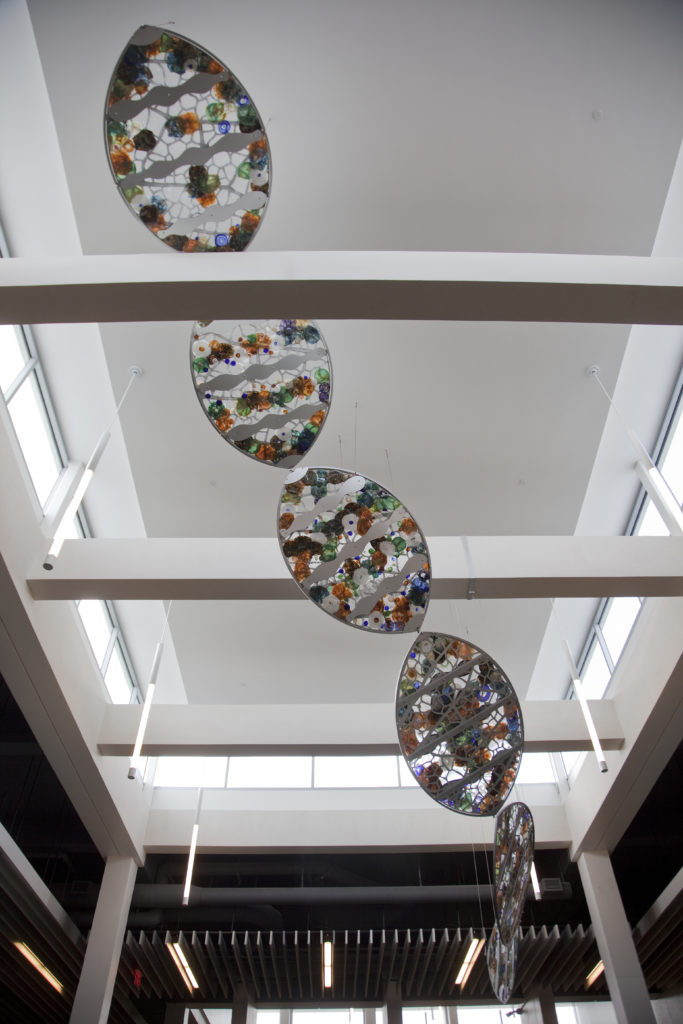 Hanging from ceiling in the central area of the renovated Lawrence Public Library is the glass artwork created by Percent for Artist winners Dierk Van Keppel and John Shreve of Kansas City. 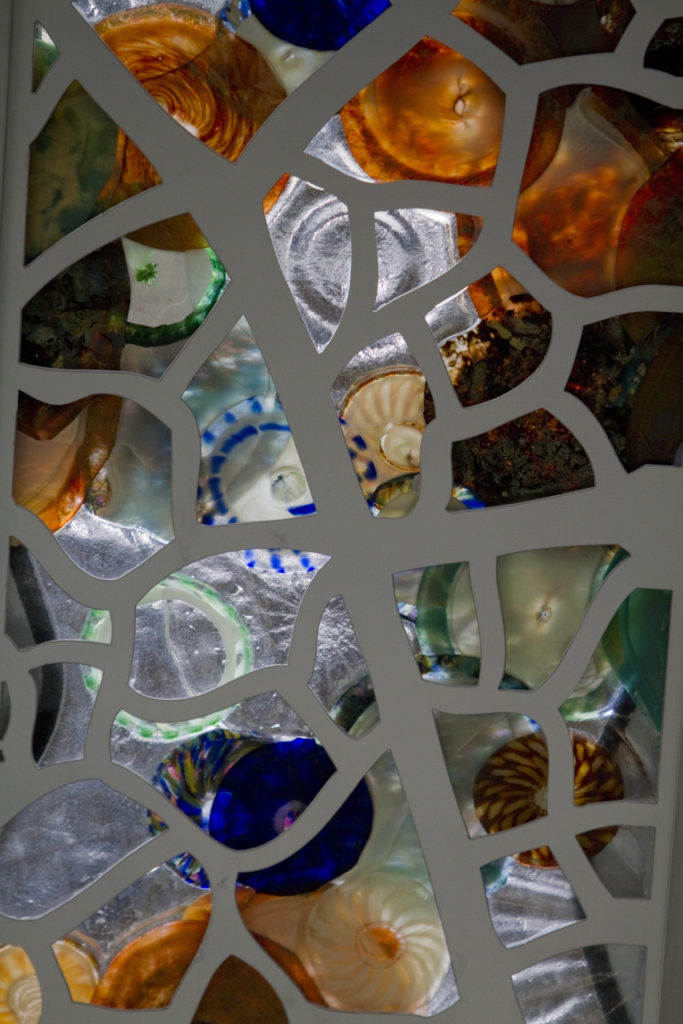 Detail piece of the glass artwork by Percent for Artist winners Dierk Van Keppel and John Shreve of Kansas City. The piece hangs from the ceiling in the central area of the renovated Lawrence Public Library.

Spanning across the atrium in the new Lawrence Public Library and above the staircase are six panels of multicolored glass strung together to make “A Ribbon of Light.”

With the framework resembling a double helix, anyone drawing scientific conclusions from its aesthetic would be exactly right.

Glass artist Dierk Van Keppel, of Rock Cottage Glassworks of Merriam, says his intention with the $75,000 commissioned art piece was to create an abstract representation of a DNA structure. As the genetic code of all living beings, DNA provides the information to form or reform ourselves, our ideas and any advancements we make, Van Keppel says.

“I think that’s analogous to the library,” he says. “It’s the keeper of all the information made available to the public to advance our knowledge and advance our society.

After the library and Lawrence Cultural Arts Commission approved the concept, the next step was making sure it could be designed to be safe and sound. With design input from artist John Shreve, Tom Zahner and engineer Craig Long contributed to a written report on the structural design, ensuring its durability. A. Zahner Co. created the aluminum “cell body” framework.

“It’s glass, and glass is fragile,” Van Keppel says. “The framework and metal backing is the safety system to hold it together.”

There will be a brief dedication ceremony for “A Ribbon of Light” at 7 p.m. July 29 at the new Lawrence Public Library building, 707 Vermont St. The Lawrence Public Library will officially open in the new space at 10 a.m. Saturday as part of numerous planned events to celebrate the re-opening. For a complete schedule, visit the library’s website. 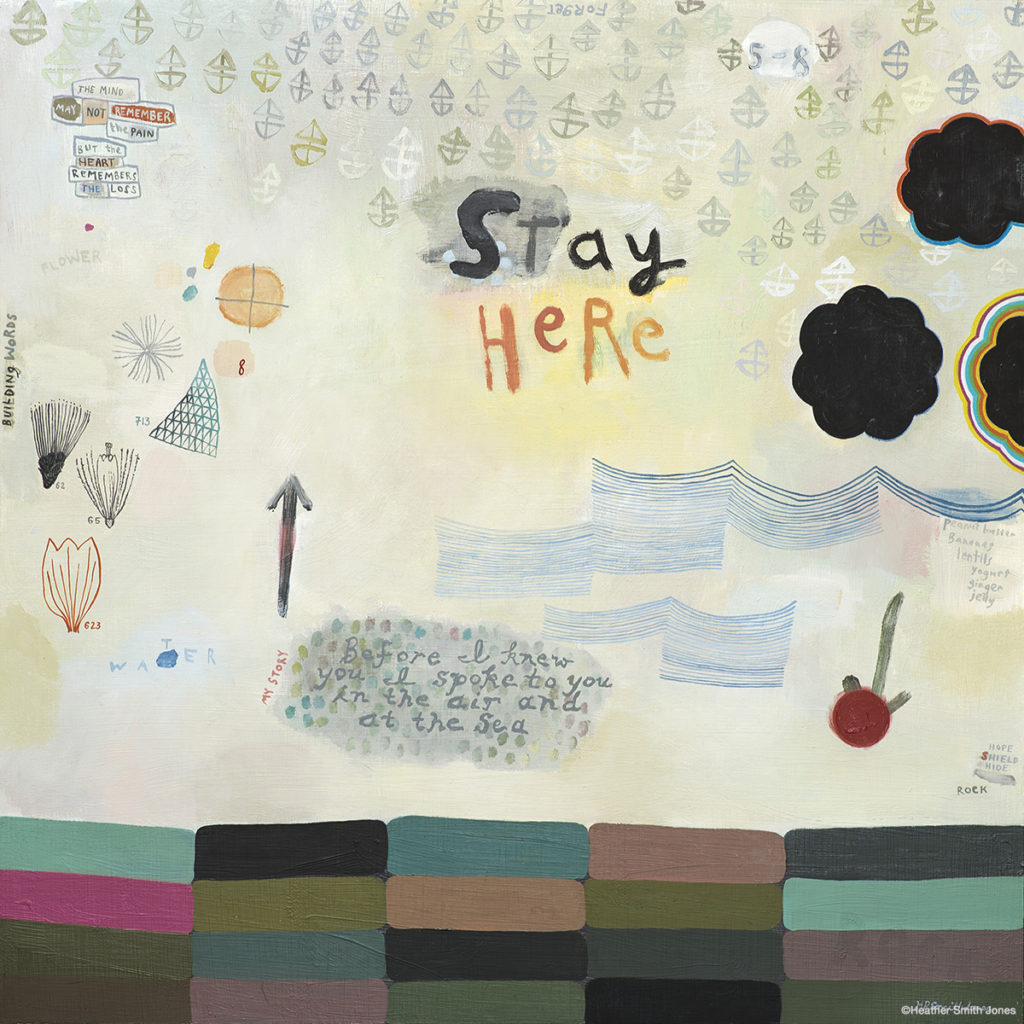 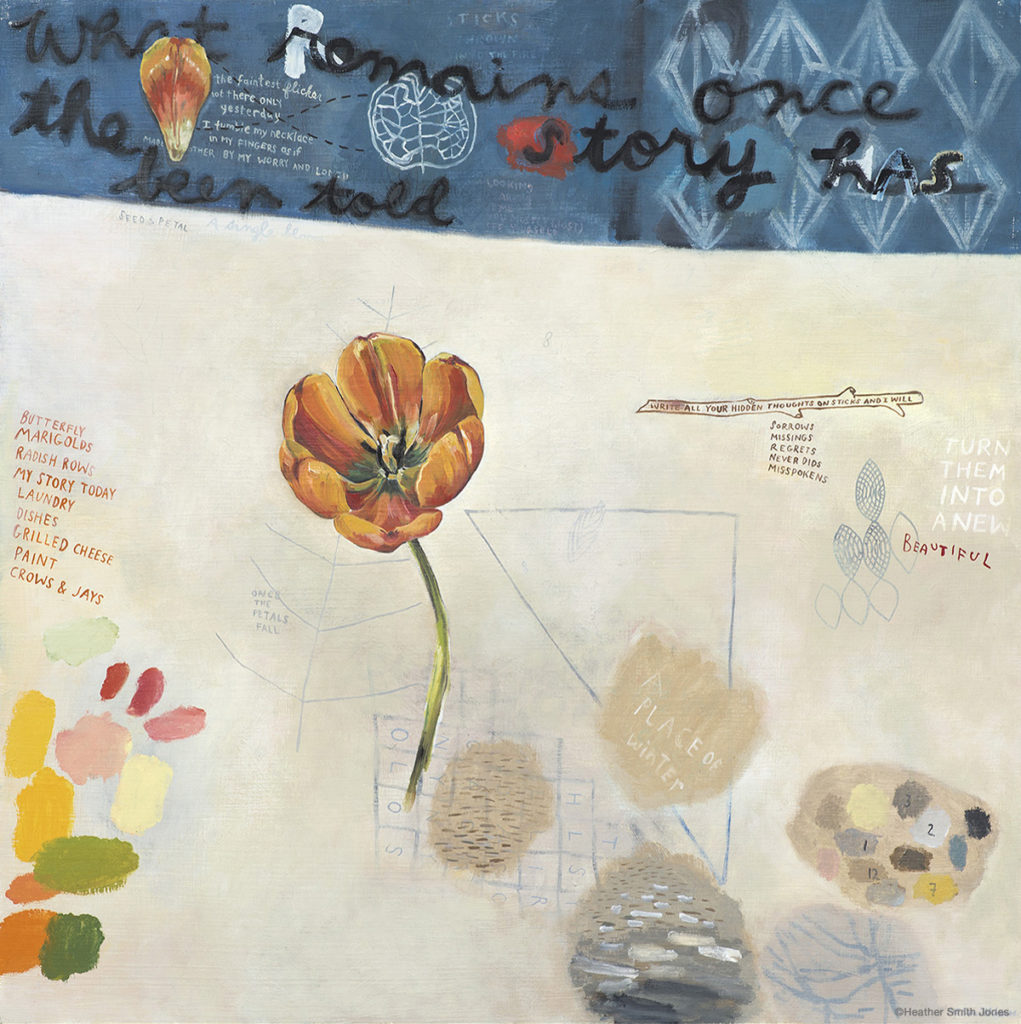 The glass was first blown in his studio, and then each colorful “DNA chain” was fused together within a matrix of clear glass using a kiln. Van Keppel has put in more than 3,000 hours over the past year on the piece. He also made similar-style glass wayfinding panels that lead to the library entrance.

Van Keppel was a founder of Lawrence’s Free State Glass studio in 1986. He left five years later to establish his own operation in Merriam, and has completed many public art projects since, including pieces at the H&R Block World Headquarters in Kansas City, Sprint World Headquarters in Overland Park, and at various area restaurants like Fiorella’s Jack Stack.

Van Keppel will be at the “A Ribbon of Light” dedication ceremony July 29 at the newly renovated Lawrence Public Library, 707 Vermont St. The program begins at 7 p.m.

Local art to be displayed

“A Ribbon of Light” won’t be the only work of art on display in the new library building. With three new spaces in the library to exhibit artwork, there’s going to be a regular monthly rotation of artists on display in two exhibition spaces, says marketing director Jeni Daley .

It’s timed so that three new artists (one space is large enough to split into two sections) will make their local debut every Final Friday and remain in the space for an entire month.

The first three artists selected to be on display in conjunction with the big opening will have their artwork up until Aug. 27: Lawrence-based photographer Camron Flanders; author, multimedia artist and Lawrence Arts Center preschool instructor Heather Smith Jones; and Kansas City painter Ramon Valdez.

Jones says she submitted a few oil paintings to the library that have never been on display before; her work has been featured at Wonder Fair, Essential Goods and Signs of Life. Text is a central theme of these selected works, working in stories surrounding large life events.

“I thought text would fit with the library because people go there for books,” Jones says.

Flanders has recently photographed a side of Kansas most Kansans are unfamiliar with, he says. Venturing out to Western Kansas, his shots show limestone pillars in Castle Rock and large chalk formations in Monument Rocks.

“People don’t even realize we have this here,” Flanders says. “It will be really cool to get it into the new building. I’ve always loved going to the library.”