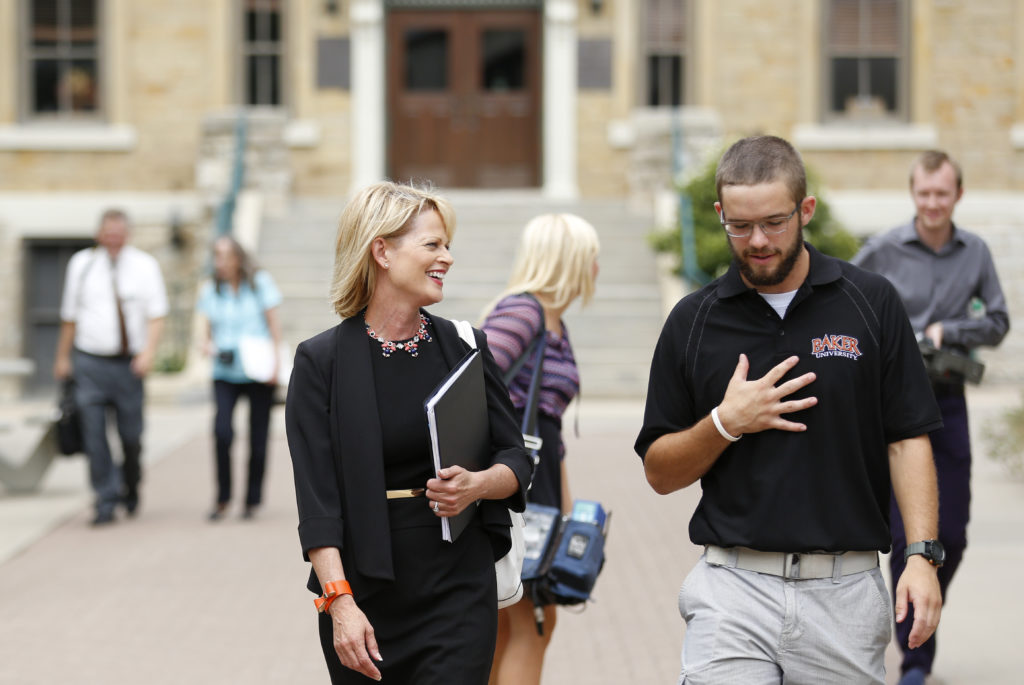 Baker University president Lynne Murray chats with recent Baker graduate and university admissions assistant Matthew Fry as he leads Murray and various media members as well as members of the Baker administration on a tour of campus, Friday, July 11, 2014.

As she had lunch Friday with members of the media, Lynne Murray recalled sailing and swimming in the Chesapeake Bay during her undergraduate days at St. Mary’s College of Maryland.

Sailing was a required course at the school on the waterfront of the St. Mary’s River near where it spills into the bay, Murray said, and as a student she had the freedom to take the school’s sailboats on bay outings.

The college’s presence on the bay gives it a much different physical setting than that of Baker University, but the two liberal arts private colleges have much in common, Murray said. They have beautiful campuses nestled in wonderful communities and have rich histories, she said.

The two schools, Gallaudet University — where she worked 14 of the past 16 years — and the nation’s other liberal arts colleges also face the same challenge, Murray said during a meet-the-media event Friday on Baker’s Baldwin City campus.

The challenge is how to continue to offer quality undergraduate and graduate educational opportunities in an environment of rapid change, Murray said. That tasks liberal arts colleges to be flexible enough to adapt and create programs that can prepare students to succeed professionally, she said.

Murray is still getting settled in after officially succeeding Pat Long as Baker president July 1. Her husband, Jeff Murray, was to arrive Friday with the couple’s two poodles as they get established in the freshly repainted Collins House, the university’s presidential residence.

Nonetheless, her days this month have started at 5:30 a.m. and ended at 11:30 p.m. as she focuses early on reading the history of the school Methodist ministers founded in 1858 and meeting Baker students, faculty and alumni and the Baldwin City community.

“Because I’m a strong proponent in shared governance, there will be committees appointed in the coming weeks to address university-wide initiatives,” she said. “My short-term goals are to get to know the Baker University community and to make the inroads I need in enrollment and advancement, which is fundraising, to get Baker University on solid ground.

“I’ll be having a lot of introductory events. I’ll be planning alumni engagement activities and what I call presidential visits here and on the road.”

She has had the opportunity to ask only a few of the school’s incoming freshmen now on campus for orientation what brought them to Baker, but the school knows most of its undergraduates are from the eastern Kansas/western Missouri area, and many have family members who went to the university.

When she was introduced as Baker’s 29th president in December, Murray said recruitment of foreign students was an opportunity to increase enrollment and realize the goals of the board of trustees of increasing diversity on the Baker campus. It was an option for further study, Murray said, possibly in partnership with the United Methodist Church.

“There are students who attend missions who could learn a lot from having a Baker experience, as well,” she said. “I don’t know how to do it, but it is something we should explore.”

Murray is still new enough to Baker that she can walk the campus without students recognizing her. That won’t last as she said she intends to continue in the footsteps of her predecessor and learn the faces and names of the school’s undergraduates. The students may find she puts them on the spot, as she was at Gallaudet.

“My Ph.D. advisor, Dr. William Marshall, asked me where I saw myself in 10 years,” she said. “I said a university vice president. He said, ‘Why not president?’ That was the first time I ever dared to think it.

After earning her undergraduate degree in 1988, Murray worked as a TV producer in Miami and Baltimore, and in corporate relations, taking time to earn a master’s in marketing from Johns Hopkins University. In 1998, she followed her husband’s lead and took a position at Gallaudet.

Murray also earned a doctorate in special education administration at the school. Only a small number of non-deaf students are admitted as undergraduates at Gallaudet, but its graduate programs accept students who are looking to go into higher education or fields such as audiology or speech pathology, Murray said.

Her husband, too, ended a long association with Gallaudet with the couple’s move to Baldwin City, where he will take on a familiar role, Murray said.

“Having worked for 26 years with a president, he is going to really work with me this first year and make sure I’m introduced to the right people,” she said. “We have to plan this inauguration and what it means to the community.”

Murray’s inauguration as Baker’s 29th president will be Oct. 30.