Column: Past is prologue for KU, Naadir Tharpe 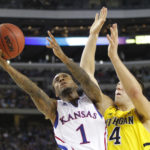 Marvin “Bad News” Barnes, a great basketball talent but back in the day not always a great decision-maker, once allegedly beat a teammate with a tire iron.

When playing for the St. Louis Spirits of the ABA, Barnes, per former Spirits play-by-play man Bob Costas, once looked at the itinerary for a road trip, saw that a flight from Louisville departed at 8 a.m. (Eastern) and arrived in St. Louis at 7:59 (Central) and famously said, “I ain’t getting on no (bleeping) time machine.”

I’d like to take it back to March 29, 2013, to the Cowboys Stadium in Arlington, Texas. Before stepping on the machine, I would sew two referees’ shirts together, tie one of the refs to a chair with any leftover material and take control of the three-man crew for the first 105 seconds of the Kansas-Michigan game. I would then do the right thing and eject Elijah Johnson from the game for delivering a shot to Michigan’s Mitch McGary, way south of the border of good sportsmanship.

I’ve often wondered how that game would have turned out had Johnson been ejected with 18:15 left in the first half. We’ll never know that or how far Kansas would have advanced had it not blown a 14-point lead in regulation with less than seven minutes left.

We do know that with Johnson limited to three first-half minutes because of three fouls, Naadir Tharpe took over and led Kansas to a 40-34 halftime lead and helped to keep Trey Burke scoreless to that point. Kansas built a big lead in the second half and then let it slip away.

After Johnson hit two free throws to give KU a five-point lead with 21 seconds left in regulation, he played as poorly as he played well in leading Kansas to an overtime victory in Ames with 39 points against Iowa State. Beyond just his final decision — veering away from the hoop when he had a clear path to the basket and firing a pass to the perimeter, leaving Tharpe with a desperation running three — it wasn’t Johnson’s night. He took questionable shots and turned it over in OT and during most of the second half and didn’t do a good job of getting the ball into the hands of the hot shooter, Ben McLemore, enabling the freshman to disappear late.

Johnson did score 13 points in 24 minutes but didn’t have an assist and had five turnovers, compared to seven assists and one turnover for Tharpe, who made just one of eight shots in 32 minutes.

Tharpe is shooting better these days — 14 of 17 overall, six of eight from three in the past two games.

The way Tharpe played that first half against Michigan, when he knew it was his show because of Johnson’s foul trouble, and the way he made clutch plays late in KU’s two most recent games at Iowa State and at home versus Oklahoma State, it makes me think what I suspected all along, that Tharpe could have steered KU to victory against Michigan had Johnson been tossed in the second minute of the game.

We won’t know until someone perfects a time machine. (We can only hope Bad News Barnes is hard at work trying to do just that, right this minute).

Oh, well, it’s always better to look ahead anyway, as in all the way ahead to the Baylor game tonight in Allen Fieldhouse, where Tharpe will have an opportunity to show again how much progress since the beginning of the season he has made in attacking a zone defense. Baylor plays more man-to-man than 2-3 zone against most teams these days, but tends to play more zone than man versus Kansas.