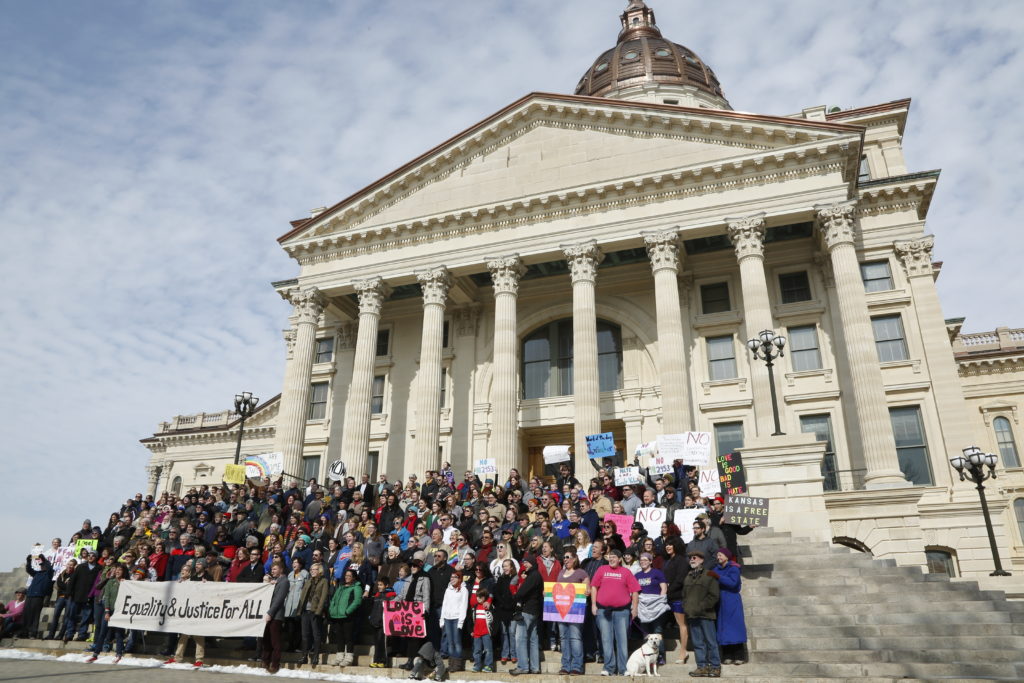 Demonstrators gather on the south steps of the Kansas Statehouse for a group photo by organizers in protest to House bill 2453, a measure approved by the House that would have allowed people to cite religious beliefs in denying services to same-sex couples. The demonstration, which drew several hundred members was organized by the Topeka non-profit group Planting Peace.

Topeka ? Some legislators say they want the issue to go away, but it won’t.

Last week, the Kansas Legislature was the object of political scorn across the state and nation after the House approved a bill that critics said would allow Jim Crow-like discrimination against gays and lesbians.

While nearly all Democrats opposed the bill, the deathblow came from Senate Republican leaders — conservatives who oppose same-sex marriage but who heard from a howling business community that said the bill would have been a legal nightmare for employers.

Now even some House members who voted for the bill are backtracking.

But even though House Bill 2453 has been buried, the conflict between gay rights and the religious beliefs of some will rise again as early as next month.

Senate Judiciary Committee Chairman Jeff King, R-Independence, said his committee will hold hearings to examine laws passed in recent years in Kansas regarding religious liberty and talk with legal experts to see if there are any “holes in those protections.”

“We just have to make sure when we dig in our heels to fight for religious liberty that we do so for all Kansans and that we do so in a way that makes sure we don’t discriminate against any Kansans,” King said.

It has become an almost annual battle in Kansas spurred by nearly every legal twist and turn on the national and state levels.

In 2005, the Legislature put on the ballot a constitutional amendment that recognized only marriage between a man and woman. Kansas voters favored it by 70 percent.

In 2012, the Brownback administration pushed for passage of what was called the Kansas Preservation of Religious Freedom Act, which would have prohibited government from substantially burdening a person’s exercise of religion unless the government could prove the action furthered a compelling interest.

Specifically, it would have invalidated a Lawrence ordinance that prohibits discrimination based on sexual orientation.

While it was approved easily in the House, the measure didn’t gain traction in the Senate.

Last year, the legislation re-emerged, but gay rights advocates said the anti-LGBT language was removed from the bill. The measure was approved by the Legislature and signed into law by Brownback.

Supporters of this year’s HB 2453 said it was needed because of recent federal court actions striking down same-sex marriage bans in several states. One case is being appealed to the 10th Circuit Court of Appeals, which covers Kansas.

The American Religious Freedom Program has been working with states to pass bills that it said would set up protections for religious beliefs. The American Religious Freedom Program is part of the Ethics and Public Policy Center, which describes itself as “Washington, D.C.’s premier institute dedicated to applying the Judeo-Christian moral tradition to critical issues of public policy.”

Brian Walsh, executive director of American Religious Freedom Program, said the bill in Kansas as portrayed by its opponents did not represent his understanding of the bill.

“I don’t know anybody who believes that you should not serve someone because of their sexual orientation,” Walsh said.

State Rep. Lance Kinzer, R-Olathe, who has authored much of the legislation opposed by gay rights groups over the past several years, insists that the bill would not have allowed discrimination against gays and lesbians.

“This has always been the case in the bill and I’d welcome any amendment that states this even more specifically as arguments to the contrary have confused some regarding the focus of the bill,” he said.

But many others disagreed, including conservatives in the Senate and business owners.

Thomas Witt, executive director of Equality Kansas, has been advocating on behalf of gays and lesbians for a decade.

“This is my tenth year in the Capitol, and I’ve never seen a bill this bad,” Witt said.

A supplemental note to the bill written by the Kansas Legislative Research Department, stated: “If an individual were employed by a governmental entity or non-religious entity, and that individual declined to provide a lawful service otherwise consistent with that entity’s duties or policies, then the employer providing such service, in directing the performance of such service, would be required to promptly provide another employee to provide the service or otherwise ensure the service was provided, if it could be done without undue hardship to the employer.”

The bill also would have required district courts to decide disputes over the law within 60 days with no additional discovery or fact-finding conducted by the court. Witt said such provisions were inappropriate.

“Some people in our Statehouse just harbor an intense dislike of gay and lesbian people and they put that dislike into a bill,” Witt said.

But King, the chairman of Judiciary, said a bill can be written to balance religious beliefs and the rights of gays and lesbians.

“Kansas has a rich and proud history of protecting religious freedom as well as fighting against discrimination in any form,” he said.