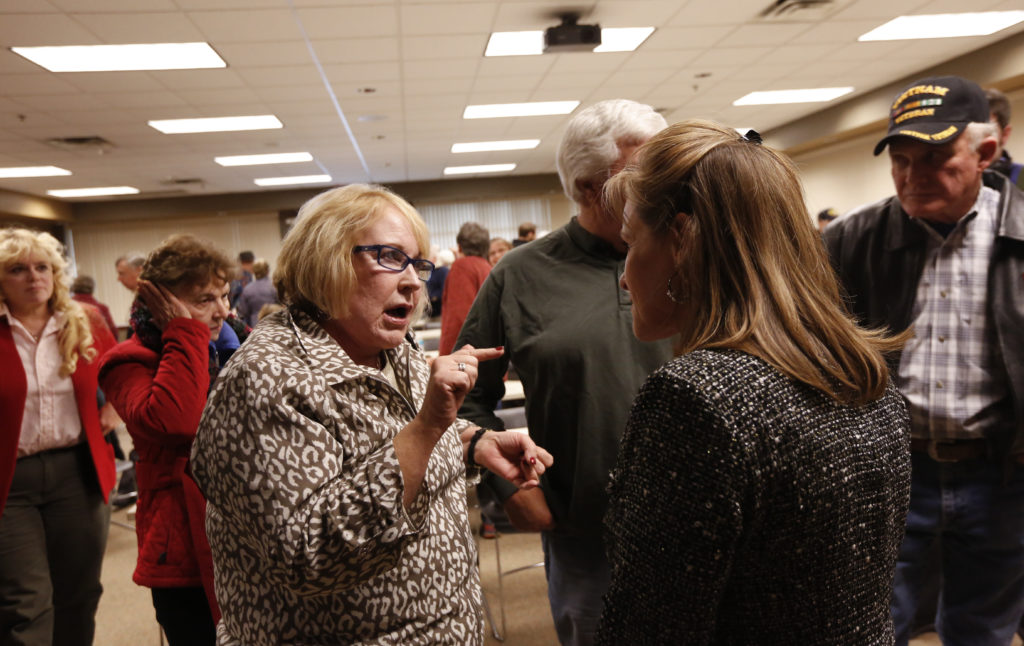 Renee Slinkard, Kansas City, Kan., lists some of her frustrations with recent congressional actions and also her wish for allowing no amnesty for any illegal immigrants to Rep. Lynn Jenkins, R-Kan., right. Jenkins spoke at a town hall meeting Tuesday, Dec. 16, 2014 at O'Malley Beverage, 2050 Packer Court. About 80 people showed up for the meeting to voice their opinions and concerns.

Kansas Rep. Lynn Jenkins told a Lawrence audience Tuesday that immigration reform will be the No. 1 priority for Republicans when the next Congress convenes in January.

Speaking at a town hall meeting at O’Malley Beverage in the North Lawrence Industrial Park, Jenkins said the spending bill that recently passed Congress only funds the Department of Homeland Security through February as a protest over President Barack Obama’s use of executive orders to change federal policy on immigration.

“So that is the issue that we have simply placed early into next year, and we will have an opportunity to have a discussion about that issue when the new Congress is seated,” Jenkins said.

Jenkins listened intently and said she agreed with those who say the nation’s immigration system is broken.

“We have to fix the illegal and the legal immigration system and let the market bear the price,” Jenkins said.

The town hall meeting drew a diverse crowd of tea party enthusiasts, independent voters and liberals, many of whom wanted to ask about the recent $1.1 trillion spending bill that funds the rest of the federal government through the end of the fiscal year.

One woman who identified herself as a graduate student said she was concerned that the funding cut for the Environmental Protection Agency could threaten water projects in Kansas at a time when Gov. Sam Brownback is trying to launch a 50-year plan for Kansas water resources that includes efforts to prevent Kansas lakes from silting up through soil erosion.

“My concern is, given the state of the state’s economic condition, and the fact that reservoir sedimentation is going to cost the state a tremendous amount of money, I’m a little concerned about cuts to the EPA,” she said.

Jenkins defended the cuts to EPA’s budget, which she said amount to about 21 percent of the agency’s previous budget, saying that was the only way to rein in an agency that she believes has gotten out of hand.

“Our only recourse was to just cut the budget, and then force them to prioritize what they were going to spend money on, and then hope that they would spend it on the things that were really important that all of us are concerned about,” Jenkins said.

Another man asked about a provision of the bill scaling back the Department of Agriculture’s new nutritional guidelines for school lunches.

“Why shouldn’t the government set standards for better quality meals rather than junk food,” the man asked.

Jenkins said she was optimistic about the upcoming session because Republicans will control both the House and Senate. The GOP picked up nine seats in the Senate in the November elections, giving it a 54-46 majority. Republicans will also hold a 246-188 advantage in the House, their largest majority since 1928.