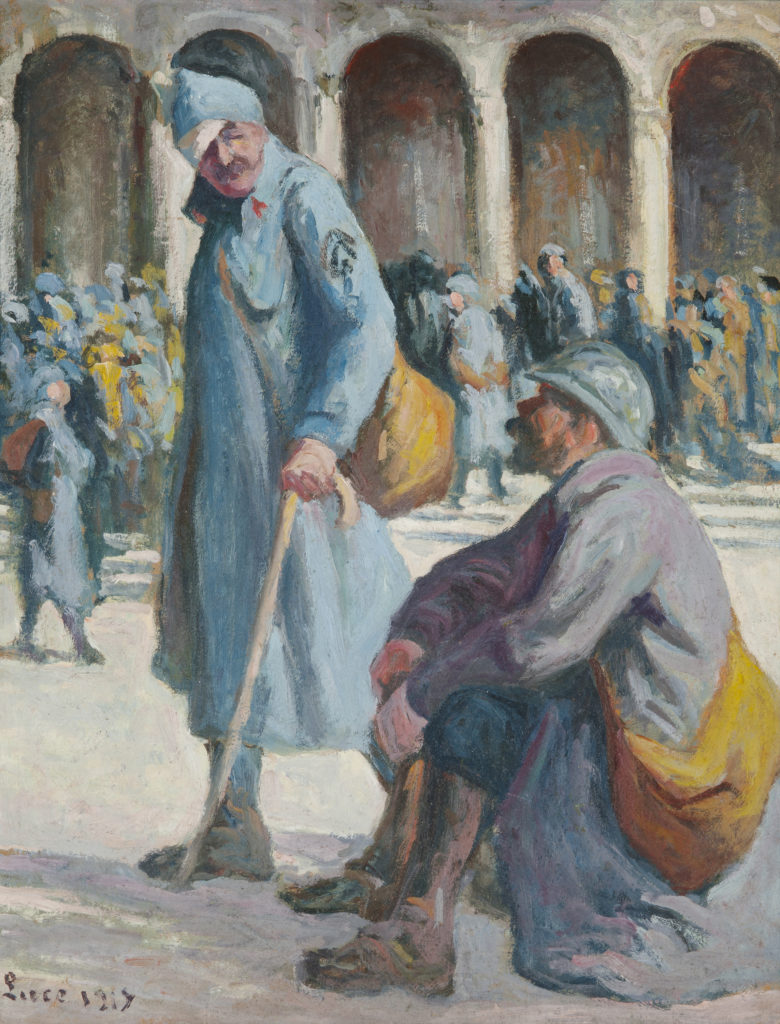 This 1917 untitled painting by Maximilien Luce of wounded soldiers arriving in Paris is part of a World War I exhibit at the Spencer Museum of Art.

Kansas University this spring kicked off its commemoration of World War I. And just as the war did a century ago, this commemoration will last four years.

The university already has played host to speakers, a Twitter project reenacting the assassination of Archduke Franz Ferdinand and a screening of the film “The White Ribbon.” The upcoming year’s events include special classes, speakers, musical performances, visual art displays and more.

The commemoration is coordinated by the European Studies Program. The goal, said Lorie Vanchena, chairwoman of the planning group, is to have a range of programming that will be of interest to the university, city, state and national and international communities.

Many historians believe that World War I “is the reason for just about everything in our world today,” said Vanchena, who also is academic director of KU’s European Studies Program and associate professor in the department of Germanic Languages and Literatures.

She said KU’s commemoration will be part of a worldwide dialogue.

“It’s an opportunity certainly to pay tribute to scholarship and research that is going on around the world about this important conflict, to help our students learn about the importance of a conflict that perhaps doesn’t get as much attention traditionally as World War II, and to highlight the resources we have on campus,” she said.

Since the commemoration will last four years, organizers especially want to attract incoming freshmen to special classes and research opportunities. A new freshman seminar offered through the Humanities and Western Civilization and European Studies programs, “How World War I Changed the World,” has already filled up, Vanchena said.

Other things planned so far:

At the Spencer Museum of Art, “World War I & The End of Empires,” a display within the “Empire of Things” permanent exhibit, features a series of French paintings depicting scenes and people from the war. It will be on view throughout the academic year.

The paintings come from a gift of more than 3,000 pieces of WWI era art that the Spencer received earlier this year.

The process of formally taking the new pieces into the museum’s collection will take years, associate director and senior curator Stephen Goddard said, but he hopes to display more of the artworks on a smaller scale throughout the commemoration, and possibly showcase some of them online.

Goddard said the museum also can draw from works already in its permanent collection, some of which were displayed in a 2010 exhibition titled, “Machine in a Void: World War I & the Graphic Arts.”

At 7:30 p.m. Sept. 30 at the Lied Center, cellist Joshua Roman will join the KU Symphony Orchestra in a performance that includes a concerto by Edward Elgar. Written in the aftermath of WWI, the concerto expresses the composer’s sadness at what had transpired, according to the Lied Center. A preperformance talk at 6:30 p.m. will feature orchestra conductor David Neely and WWI commemoration organizers. To purchase tickets, go online to lied.ku.edu or call 864-2787.

The Lied also hopes to commission a work by an eastern European musician, and is working with KU’s Center for Russian, East European and Eurasian Studies to do so, said Anthea Scouffas, engagement/education director for the Lied.

More commemorative activities will be forthcoming. For more information as they are scheduled, go online to european.ku.edu/wwi-tribute and kuwwi.com.

“Things will develop over time, but we plan to work hard to keep the momentum going,” Vanchena said.