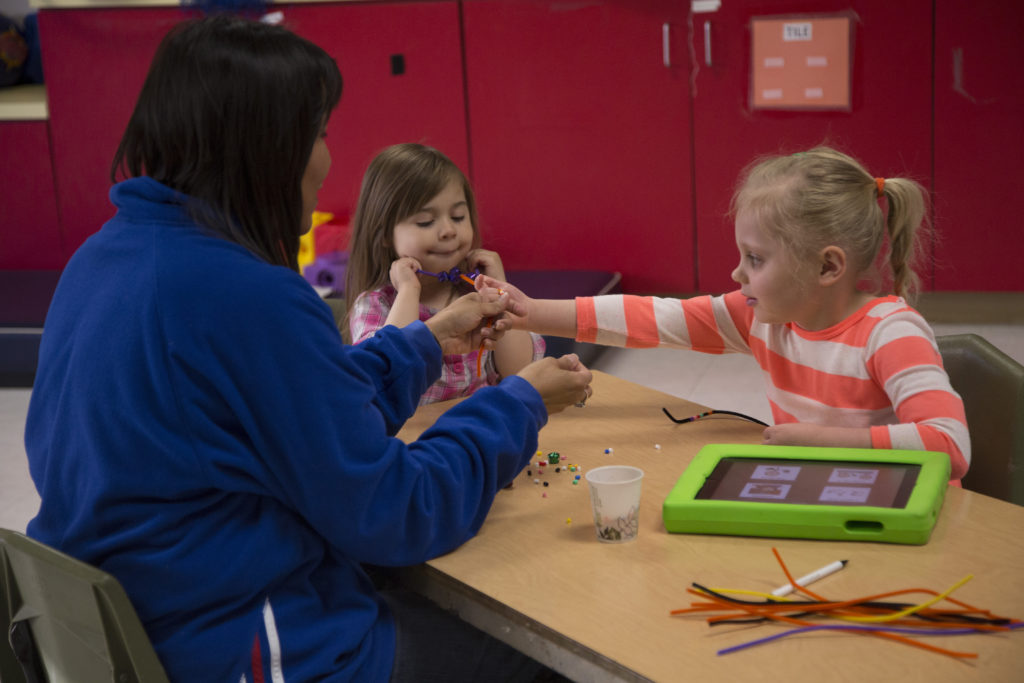 From left, Sandy Davalos Wainwright, an early childhood special education teacher, makes crafts with Isabella Estrada, 4, and Laine Durler, 5, on a recent day at Educare Preschool, 1000 Sunnyside Ave. Laine, who has autism, uses an iPad to communicate as part of a Kansas University research project.

For the two preschool-age girls, it was arts and crafts time.

On a recent day at Lawrence’s Educare Preschool, Isabella Estrada, 4, and Laine Durler, 5, sat at a small table, making necklaces and bracelets with the help of a teacher, Sandy Davalos Wainwright.

When Isabella needed help, she would ask for it. However, when Laine did, she pressed the screen of a nearby iPad, which announced: “I need help.”

Laine has autism, and thus lacks the communication and social skills of many of her peers. However, some Kansas University researchers are hoping technology can give children like her a much-needed boost.

If the early results are any indication, it appears the use of tablet computers and mobile applications can improve the way students with autism interact with classmates and teachers.

“So far, we have had kids who are taking turns communicating on the iPads, kids interacting with each other without prompting — that’s our goal,” said Kathy Thiemann-Bourque, the associate research professor at KU who is leading the project, which began in July. “Our goal is to help not just with communication but the social piece as well.”

The four-year study, one of a number of KU research projects focusing on autism, follows a dozen non- or minimally verbal students with autism annually at five area schools, including two in Lawrence (Kennedy Elementary School is the other). Each student gets an iPad with voice output software, and teachers are trained in how to use the devices. The study is being funded by a $1.2 million grant from the National Institutes of Health.

Technology has long been used to help children with autism communicate, Thiemann-Bourque said, but mostly for teaching them words. The KU project aims to see if the tablets can also be utilized to improve the social interactivity between children with autism and their peers. The big question the study is trying to answer: “How do we use an iPad to teach social communication vs. using it to teach vocabulary?” Thiemann-Bourque said.

Laine’s mom, Audra Bogard, said she’s noticed a difference in her daughter’s communication skills since her treatment in Lawrence began.

“Her verbal phrases and skills have exploded,” said Bogard, a social worker who, with her husband, moved to Lawrence from western part of the state about a year and a half ago to be closer to KU’s special education programs. “With the imitation and hearing words over and over again, she’s constantly expanding her vocabulary. We love going back to western Kansas to see our family who hasn’t seen her for a while.” 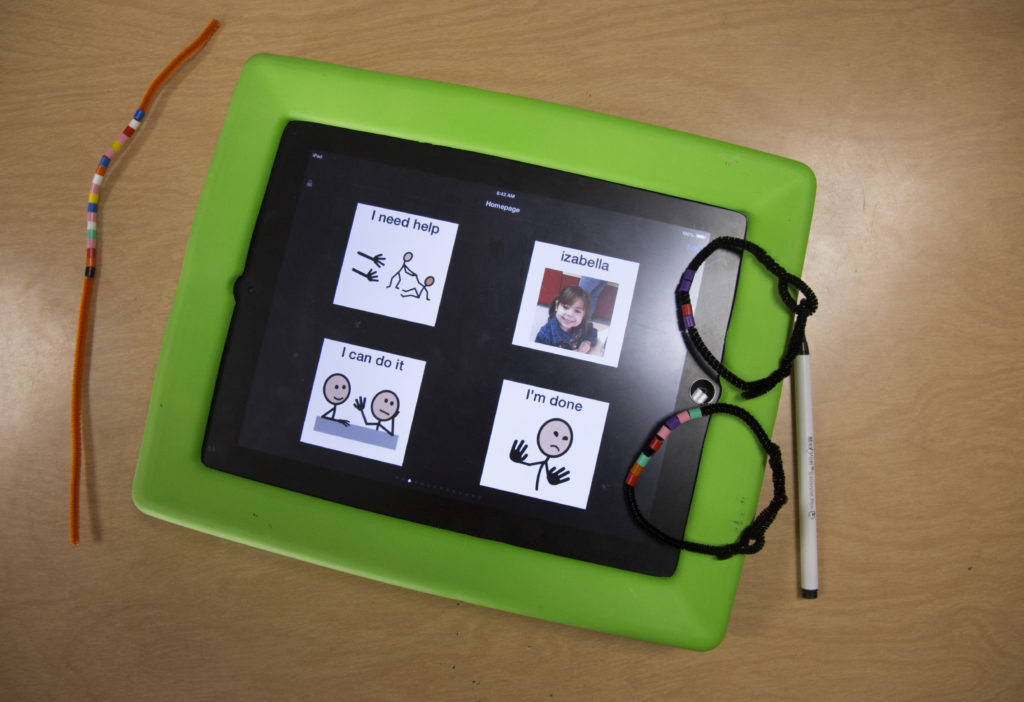 Some local students with autism are using an iPad app like this one to make commands and ask questions as part of a Kansas University research project.

Davalos Wainwright, an early childhood special education teacher with the Lawrence school district, said she’s also seen a burst in Laine’s expressive language skills in recent months. To qualify for the project, students had to have a vocabulary of 15 or fewer words. Laine is very imitative, so the iPad gives her more phrases to use. “She gets very excited about the iPad,” the teacher said.

It has also cut down on Laine’s physical aggressiveness, as she can now press a button to get her fellow students’ attention rather than, say, grabbing them.

“When (children with autism) have a way to communicate, they get less frustrated,” Thiemann-Bourque said. “It also teaches peers how to be more accepting and empathetic.”

The other day at Educare, Davalos Wainwright demonstrated how to string beads through a pipe cleaner to make a bracelet. “Which color would you like to do next?” she asked Laine. “Yellow or pink?”

“Pink,” Laine said, before groaning and turning her head in every direction. With a little prompting from her teacher, the 5-year-old pressed the iPad: “I need help,” the robotic voice said.

As the teacher attempted to assist her, Laine started making noises of frustration and spreading the craft supplies around the table.

“You can say,” Davalos Wainwright said, before touching the iPad. “I can do it,” the device spit out.

“No!” Laine says, turning her back. Laine, the teacher explained, likes doing things on her own.

A few moments later, as Davalos Wainwright tried again to show Laine how to bead a bracelet, the little girl moaned then touched the iPad.