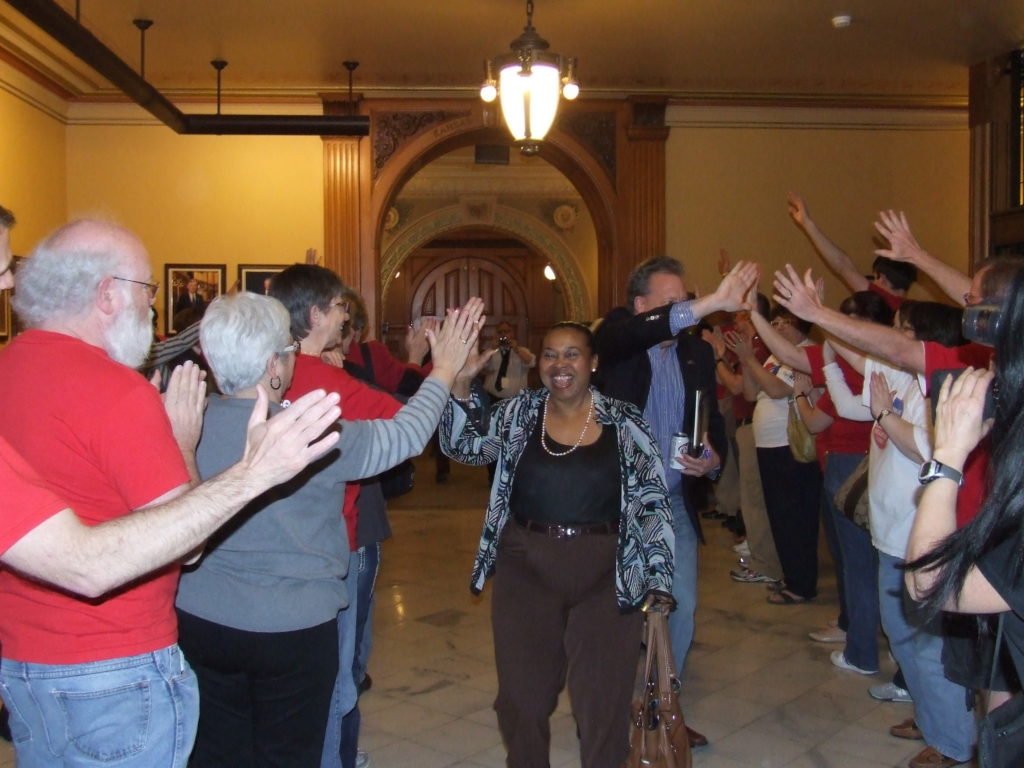 Democratic Sens. Oletha Faust-Goudeaux of Wichita and Tom Holland of Baldwin City receive walk through a phalanx of teachers who were grateful for their votes against a school finance bill that would also repeal their tenure rights. The bill passed both chambers anyway and is now on its way to Gov. Sam Brownback for his signature.

Topeka — After a weekend of bitter debates, Republicans in the Kansas Legislature on Sunday approved a bill that provides additional funds to public schools, but would also repeal teacher tenure rights and provide indirect public financing for private and parochial schools.

The dramatic votes and round-the-clock meetings brought to the Statehouse hundreds of teachers whose plea to maintain job protections was rejected.

After the bill was approved, House Speaker Ray Merrick, R-Stilwell, walked by a group of teachers who stood silently, but one man said to him, “You should be ashamed of yourself. That was a (expletive) way to make policy.” Merrick replied, “I don’t feel any shame.” The man later told those around him, “Sorry, I shouldn’t have said that.”

The bill was approved 63-57 in the House after passing on a 22-16 vote in the Senate — just one more yes vote than the minimum number required in the Senate. Only Republicans supported it.

The measure now goes to Gov. Sam Brownback, a Republican, for consideration. Late Sunday, he issued a statement praising the bill. Lt. Gov. Jeff Colyer and other top officials in the Brownback administration were on hand for the vote in the House and congratulated Republican leaders.

The vote concluded a weekend of long meetings, including a 3 a.m. conference committee that Democrats alleged violated the Kansas Open Meetings Act and a rancorous Senate debate which brought assertions of procedural abuses from Democrats and some Republicans.

The base bill, which provides additional state aid for the capital outlay and local option budgets of less wealthy districts, was intended to answer a recent Kansas Supreme Court ruling in a school finance lawsuit.

It also provides additional state funding across the board for all school districts’ local option budgets – additional money they’re allowed to raise above and beyond their base state aid.

“I think we have hit all the points we need to hit,” Merrick said.

But throughout the process, conservative Republicans insisted on attaching additional policy changes to the bill.

The most controversial of those would be to exempt K-12 teachers from a law that has been on the books since 1957 that says if they have been on the job three or more years, they are entitled to an administrative due process hearing before they can be fired or have their contract non-renewed for the following year – rights commonly known as “tenure.”

Hundreds of teachers packed the Statehouse on Saturday and Sunday to protest the proposal, saying that due process regulations help provide teachers job protection against unjust dismissal and helps with the efficient operation of schools. They were praised by legislators on the right and left for being civil.

State Rep. Marvin Kleeb, R-Overland Park, however, said the proposal will make it easier to get rid of incompetent teachers, which would help competent teachers. “It has been framed as anti-teacher but it is anything but,” he said.

The bill also provides a 70 percent tax credit for corporations that contribute to scholarship funds enabling low-income students and students from the lowest-performing public schools to pay tuition at private or parochial schools.