Bill Mayer, longtime member of the Journal-World news staff, died Thursday. He was 88.

Mayer, born Billy Francis Mayer on April 11, 1925, in Kansas City, Kan., worked at the newspaper for 60 years, leaving a legacy of printed columns and stories and a legendary history of anecdotes and jokes among his friends and colleagues. 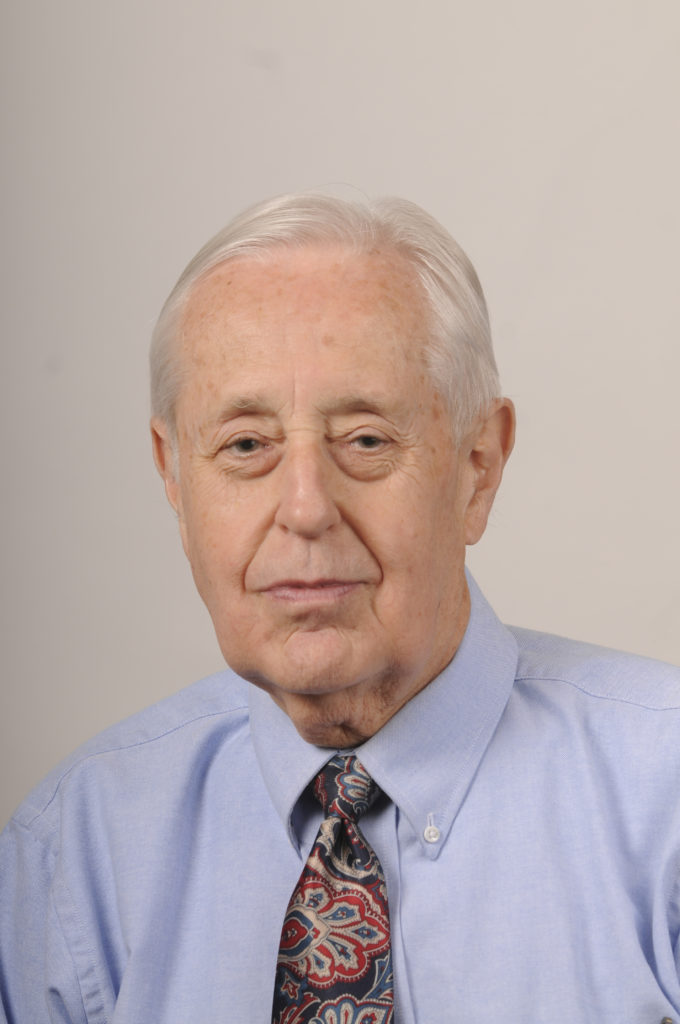 “The Journal-World, Lawrence, Kansas University, the state of Kansas and the newspaper business all were fortunate when in 1950 Bill Mayer moved from Green Bay, Wisconsin, to become a Journal-World reporter,” said Dolph Simons Jr., editor of the Journal-World and chairman of The World Company.

“He was a hard and prolific worker and a loyal associate. He demanded truth and accuracy and he was fearless in standing up for what he thought was right. In today’s environment, the entire information business needs more people like Bill Mayer.”

Simons added: “When I was an intern and as a fresh-out-of-college student, no one could have had a more helpful coach, tutor, adviser and friend than Bill Mayer. The public, his readers, have no idea or appreciation of his deep loyalty and how proud he was of Lawrence and Kansas University as well as his belief in the role and importance of a daily newspaper.”

Both Mayer and his wife, Beverly, were 1943 graduates of Wyandotte High School. Mayer served in the Army Air Corps in World War II as a 20-year-old navigator on B-24 bombers, flying missions over the European Theater of Operations.

After his Army service, he attended Kansas University, graduating in the spring of 1949 with a bachelor’s degree in journalism. While attending KU, Mayer worked on the University Daily Kansan, and worked part time for the Kansas City Star and Topeka Daily Capital. Mayer worked one year as managing editor of the DePere, Wis., Journal-Democrat, then came back to Lawrence in June 1950 as reporter for the Journal-World. Eventually, he was saluted on his 55th anniversary with the company and then again on his 60th, in 2010.

He was sports editor, managing editor, and executive editor at the Journal-World. He was serving as managing editor during the late 1960s and early 1970s when violence broke out on the KU campus.

“We had a great staff in the newsroom then,” said Ralph Gage, who followed Mayer as managing editor, “but Bill was the leader. Times were tense, but you could always count on Bill to break the tension with a joke — and to bring you back to reality with a wisecrack or a nickname. Man, we had a lot of fun.”

The newspaper won the National Headliners Club Award for its coverage of the stormy events that swept across Lawrence. Over his many years in the newspaper business, Mayer won a number of personal awards from the Kansas Press Association and Associated Press for his reporting and column writing.

Mayer loved to tell jokes and to share stories. He particularly enjoyed recounting tales of Phog Allen. Jack Mitchell was another KU coach who provided fodder for Mayer’s anecdotes. On a more serious side, the only Bible to be found on the newsroom reference shelves was one inscribed to Billy Mayer from his mother.

Mayer went to part-time status in September 1987 but he continued to write the sports column that he had begun in the fall of 1950. He continued it until his formal retirement April 5, 2010. He also wrote a majority of the newspaper’s editorials after becoming managing editor in 1956 until his semi-retirement. He continued to contribute editorials and work on the Old Home Town column until his retirement. Even after that, he contributed columns, calling on his recollections of KU sports figures.

Bob Nordyke, former J-W managing editor and a colleague of Mayer’s for more than 20 years, said Mayer thrived on the camaraderie of the newsroom.

“He instilled in all of us a sense that we were doing important work, but rejected self-importance,” Nordyke said. “He made us laugh (sometimes groan); he was the guy who brought doughnuts to the newsroom every Saturday morning; and he always had the quiet word of encouragement for a good story or a good turn of phrase.”

“Bill was definitely old-school about the profession he loved,” Nordyke said, “and I don’t think he ever tired of seeing the presses roll.”

“A line from the note he sent me when I retired said much about Bill,” Nordyke said. The line reads: “I’m so proud we’re known as damned good newspapermen, ‘not just journalists.'”

Mayer was an avid sports fan, said daughter Val Pernice. “This man would watch TV, read the paper, listen to the radio, all at the same time. And write about it.”

Regarding music, which Mayer also loved, Pernice said she’d always remember her father saying this: “A marching band that has a lot of decoration — flags, twirlers, dancers — hides the fact that they suck … your good bands are just good. They don’t need any decoration.”

“He was the type of person that didn’t hold back; that’s why he was good at his editorials. He said what he felt,” Pernice said.

A memorial service is planned for 11 a.m. Friday, April 11 (his birthday), at Plymouth Congregational Church, 925 Vermont St. A reception will follow the service.