Couple has helped numerous homeless children, parents get back on their feet 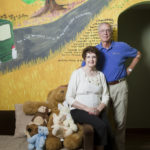 Joe and Nancy Reitz have been an integral part of Family Promise from its inception. Nancy Reitz is the program's past treasurer and Joe Reitz is founder and board member emeritus.

Joe and Nancy Reitz’s dedication to families has never stopped.

They took in foster babies back when they had babies of their own. They provided shelter to homeless mothers. They helped start a nonprofit in Lawrence that gives a kick-start to down-and-out families.

Their volunteerism comes from a deep faith in God and a belief that it’s their duty to help others.

But Joe Reitz, a retired Kansas University business professor who was the founder of Lawrence Family Promise and CEO of the Leo Center and Heartland Medical Clinic (now Heartland Community Health Center), says that Nancy is the true unsung hero, calling her the “most selfless woman I’ve ever met.” She has for years provided pro bono accounting work to local charities, and hosts homeless families when they stay overnight at her place of worship, Morning Star Church, or one near her home, Eudora United Methodist Church.

Dana Ortiz, executive director for Lawrence Family Promise, said that whenever she has an urgent accounting need, Nancy is available. “She always approaches her work, and her service, with a spirit of generosity, love, kindness and authenticity,” Ortiz said. “I am a far more efficient executive director because of Nancy’s volunteer efforts. I am a far better person through the joy of knowing and working alongside Nancy Reitz.”

Nancy, 69, a certified public accountant at Lawrence’s Mize Houser & Co., also has donated her accounting skills to such organizations as the Pregnancy Care Center of Lawrence, Called to Greatness, Morning Star Church, the Lawrence Association of Evangelicals, the Leo Center and Heartland Medical Clinic.

“She is very meticulous in her work and does it not expecting anything in return,” said Richard Lorenzo, an acquaintance from Lawrence who describes Nancy as quiet, selfless and a tireless worker. “A number of not-for-profits are indebted to Nancy for all the work she does.”

Joe Reitz, 74, said that having led nonprofits himself, he knows the importance of having reliable accounting (and for free, at that). “When you’re out soliciting funds, whether from an individual or a foundation, and you give them accurate, reliable, complete financial information at the drop of a hat, they’re much more likely to contribute or give you a grant,” he said.

The Reitzes’ involvement with needy families started when they fostered babies who were in limbo between birth and adoption in the Kansas City area. This was at the same time they were raising their own kids (the couple has five children and 12 grandchildren).

Later, after moving to Gainesville, Fla., where Joe taught at the University of Florida, the Reitzes opened their home to a high school student whose parents had kicked her out because she was pregnant. She had her baby, gave it up for adoption and moved back home. Years later, after she had graduated from college, the Reitzes attended her wedding.

The Reitzes came to Lawrence in 1988. After Joe retired from KU in 2006, he got involved with the Leo Center and Heartland Medical Clinic. That’s when he met several single mothers with no place to go, introducing him to the problem of homelessness in Lawrence. Looking for a solution, he heard about Family Promise, a national organization that uses churches to house and feed homeless families while they get back on their feet. In 2008, Reitz founded a local chapter.

Since then, the nonprofit has gone on to provide permanent housing to more than 400 families, many of whom return to volunteer for the program. Their stories stay with the Reitzes to this day: The single dad with five kids. The man raising his granddaughter. The Iraq War vet down on his luck. The couple with five daughters. That’s not to mention the numerous local volunteers who have made Family Promise a success.

The Reitzes say their charitable work has not only brought them closer together but opened their eyes to how lucky some of us are.

“As blessed as I was to grow up with two parents who cared about me and encouraged me and took care of me, when I began to work as a volunteer in the Crisis Pregnancy Center (in Florida), I saw a whole different story: girls whose parents didn’t take care of them, who couldn’t turn to their families for support in a time of need, and who, a lot of times, had been abused by those very families or extended families,” Nancy said. “That was just totally outside of anything I’d even heard about or thought about. …

“But we have a God who’s a healer,” she added. “He uses us to bring his love to these people: to give them hope, to give them a future.”