Doctors’ offices may not see a lot of changes from Obamacare 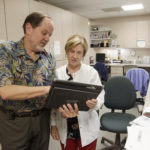 Dr. Steven Bruner and nurse Jan Potts confer at Lawrence Family Medicine & Obstetrics on a recent day. Bruner says he doesn't expect the Affordable Care Act to have much of an effect on local doctors' offices.

Ryan Neuhofel’s Lawrence primary care practice seems like it would be affected quite a bit by the Affordable Care Act. Neuhofel, aka Dr. Neu, only takes cash, and most of his patents are uninsured. Next year, the federal health care reform law mandates that Americans have coverage or they’ll face a fine.

But Neuhofel doesn’t expect the new rules to have much of an impact on his office, NeuCare Family Medicine. Even now, he says, he sees patients who have insurance, and generally is able to treat them for cheaper than it would cost under their plans, which often have high deductibles.

The Affordable Care Act “was 99 percent insurance reform,” he said. “Because I work outside of that system, it won’t directly impact anything we do as far as operations or prices or anything like that.”

How the law referred to as Obamacare affects medical practices remains to be seen, but many physicians and health care experts say they don’t expect that doctors’ offices will experience a lot of changes.

For one thing, many practices already do business with the companies selling on the health insurance exchange in Kansas — Blue Cross Blue Shield of Kansas, Coventry Health Care of Kansas and Blue Cross Blue Shield of Kansas City. For another, the state has so far opted not to participate in the law’s Medicaid expansion, which would have covered an estimated 150,000 uninsured Kansans and led to increased demand for primary care services.

“I think most doctors would tell you that dealing with insurance companies is an administrative hassle. But I think most of them are used to it,” said Sheldon Weisgrau, director of the Topeka-based Health Reform Resource Project, who believes the law will be a positive for most doctors. “All health care providers are now giving away services for free or below what they usually get paid. More people insured is better for them because it’s more paying customers.”

Robert Lee, professor of health care policy and management at the Kansas University School of Medicine, said doctors’ offices should be able to implement the law without any major administrative headaches.

“It shouldn’t be real difficult because for the most part these are going to be pretty standard insurance plans that people are getting,” he said. “I suppose if you get more patients who are insured that means slightly more paperwork, just because you have more patients who have insurance.”

Instead, Lee believes the influx of clients will spur many doctors’ offices to provide cheaper, better-quality care. That is already happening, he said, with the recent trends of practices trying to follow up on and centralize patients’ care and hospitals aiming to cut down on readmissions.

Steven Bruner, who practices at Lawrence Family Medicine & Obstetrics, said that most of the changes in the law had to do with insurance, namely making it more affordable for low-income Americans.

“The big decision-maker would have been if they would have expanded Medicaid in Kansas. It could have put a little more stress on the primary care offices to take care of everybody,” he said.

While Bruner doesn’t believe the Affordable Care Act will be a major transformation for health care, he does think one is coming down the road (though probably not in his lifetime, he added): a single-payer system. And he expects many physicians to support it.

“If you were talking 20 years ago, the doctors would have vehemently opposed it,” he said. “Nowadays most doctors don’t work for themselves — they work for hospitals. They don’t care how they get paid; they just care that they get paid.”

Bruner said that while health care reform has needed to happen for a while because of the industry’s ever-growing slice of the economy, Obamacare was merely “a gesture.”

“It’s just amazing to me it’s such a brouhaha,” he said. “It was just a really little change.”