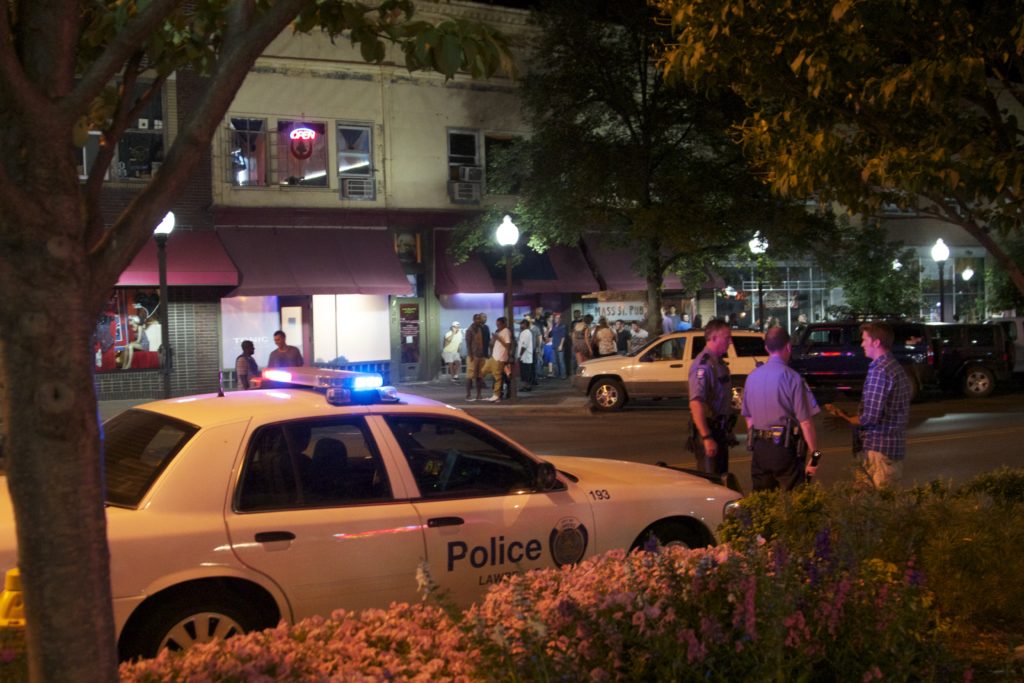 Police officers talk with a college student in the 700 block of Massachusetts Street early Friday morning. Several officers have been detailed to work downtown and in other party hotspots in an effort to curb dangerous behavior associated with alcohol as a new school year begins at local universities.

• Six minors in possession of alcohol.

• Two interfering with officers in their duties.

• Several traffic-related incidents such as illegal turns, intoxicated pedestrians in the roadway, crossing against a traffic signal in a hazardous manner or impeding traffic, stop light violations and other vehicle safety equipment violations.

• Four crossing against a traffic signal, jaywalking, or other hazardous pedestrian behavior.

• Fifteen minors in possession of alcohol.

• The remainder were traffic related.

By now, many college students have had run-ins with a police detail aimed at curbing dangerous behavior associated with partying.

Not all of them have enjoyed the experience.

Some have been ticketed for consuming alcohol or urinating in public — or both. Others have been arrested for battery or cited for illegally walking into traffic in front of cars on Massachusetts Street. In all, the special detail has cited more than 180 people since Aug.14, for offenses ranging from possession of alcohol by a minor to using a fake ID. Fourteen have been arrested, including several for DUI.

It’s hard to know how much of an impact the new enforcement tactic has had so far, said Sgt. Trent McKinley, a Lawrence Police Department spokesman. One night last week, about a half-dozen patrol officers assigned to the downtown area had their hands full at some points but said fewer people were carrying alcohol openly on the streets or “behaving in a way that draws attention to themselves,” compared with mid-August, when the special detail started.

Some Kansas University students resent the new police effort, said Marcus Tetwiler, who has heard talk on campus from his post as student body president. While he supports efforts to keep students safe, he knows some students — rightly or wrongly — feel they are being unfairly targeted by law enforcement.

Trouble, even on a quiet night

Downtown was relatively quiet for much of the Labor Day weekend, with many young people out of town for the holiday. But even on a quiet night, officers saw some early warning signs of trouble and tried to intervene. Some of those interactions were friendly — others less so.

One young man was spotted stumbling west on Eighth Street about midnight, shoeless, clearly inebriated as he argued with someone on the phone and bumped into storefront windows. Officers stopped to talk with him, and let him continue on his way after judging that he was in good enough shape to get home.

A short time later, at the corner of Eighth and Massachusetts streets, officers stopped a group of three young men who had crossed the intersection against the light. It might not have been worth their time, except that one of the men, who had clearly been drinking, had walked in front of a car, causing it to stop, and shouted at the driver, police said. The officers wrote him a citation for crossing illegally, despite his loud and expletive-filled objections.

While that resident appeared unhappy with the police effort, the purpose of the detail is not to interfere with people’s fun, McKinley said. The officers are trying to prevent people, some of whom have had too much to drink, from getting hurt. Police are looking for people walking right into heavy traffic, for fights that are close to escalating into real violence, and late-night muggers who prey on those tipsy partygoers who aren’t prepared to defend themselves.

In some cases, the officers are called to break up altercations that are unfortunate but commonplace. In others, events are so strange that they can only be explained by drunkenness.

Take the case of a young man and woman who were assaulted while walking home from a bar on the evening of Aug. 27, for example. As the two made their way home in central Lawrence, two unknown individuals appeared and made a “sexually explicit” remark about the young woman. The young man objected, and was beaten by the two individuals, who punched him in the face multiple times. Police assigned to the downtown area responded, the subjects fled, and Lawrence-Douglas County Fire Medical workers treated the young man for minor injuries.

The week before, officers responded to a bizarre assault near Ninth and Illinois streets, where a 22-year-old man was arrested for allegedly attacking a group of foreign exchange students with a length of bamboo. The students were walking east on Ninth Street, according to police, when a man who was “cackling” and menacing them with a “bamboo staff, similar in length to a pool cue,” confronted them. The man allegedly chased the students for two blocks before giving up. Officers later found him behind a downtown pizza restaurant, still in possession bamboo stick, and arrested him on suspicion of aggravated assault and consuming alcohol in public.

When to watch out

Lawrence is certainly not unique among college towns in seeking an answer to public safety problems rooted in alcohol, as both police and student leaders point out. In Tempe, Ariz., 857 people were cited or arrested near the Arizona State University campus by the Tempe Police Department’s “Safe and Sober” task force after just a week of classes this year, according to the local television station CBS 5.

In Lawrence, police plan to continue assigning extra officers downtown and other possible trouble spots to patrol on foot, on bicycles, and in patrol cars, for at least the next few weeks, McKinley said. Police haven’t said how long the detail will be in force, but it is not a permanent unit.

“I believe with some consistency over the next few weeks many will have a clear understanding of what the community expects of their behavior and how violations related to safety and reckless use of alcohol will be addressed,” McKinley said.

Meanwhile, word about the police presence downtown and in other party spots has gotten around campus and there have been complaints, said Tetwiler, the student body president. Some feel as if the student population is being stereotyped as irresponsible. Others suspect the tickets are a way to raise revenue for the city. “That’s the pulse that I sense,” Tetwiler said. “They are an easy target for fines and citations.”

For his part, Tetwiler said he respected the good intentions of officers and hoped that they would try to be objective about their enforcement efforts without singling anyone out unfairly. It was hard to dispute, he said, that alcohol frequently gets people into trouble and students are no exception.

“Safety, even from ourselves, is important,” he said. “But students don’t want to be thought of as easy money, either.”

McKinley said the effort is not about money, but about safety. Both police and student leaders point out that college students hardly have a monopoly on drinking and rowdiness in Lawrence, and not all of the people cited by the special detail are students. Even so, police say, they still believe they have a message to deliver to the influx young people just arriving in town: Lawrence is not a Bourbon Street-style environment, where anything goes.

Police have declined to say exactly how many officers are involved in the detail, or when and where they are posted. But some observations in August determined that the detail is most active in downtown Lawrence in the evenings, from Thursday to Saturday night, and typically involves about six officers.

The officers were made available through a reshuffling of the regular patrol schedule, McKinley said. The seasonal effort is designed to not require overtime, and some of the officers on the detail are inevitably pulled from their posts downtown to handle emergency situations elsewhere.