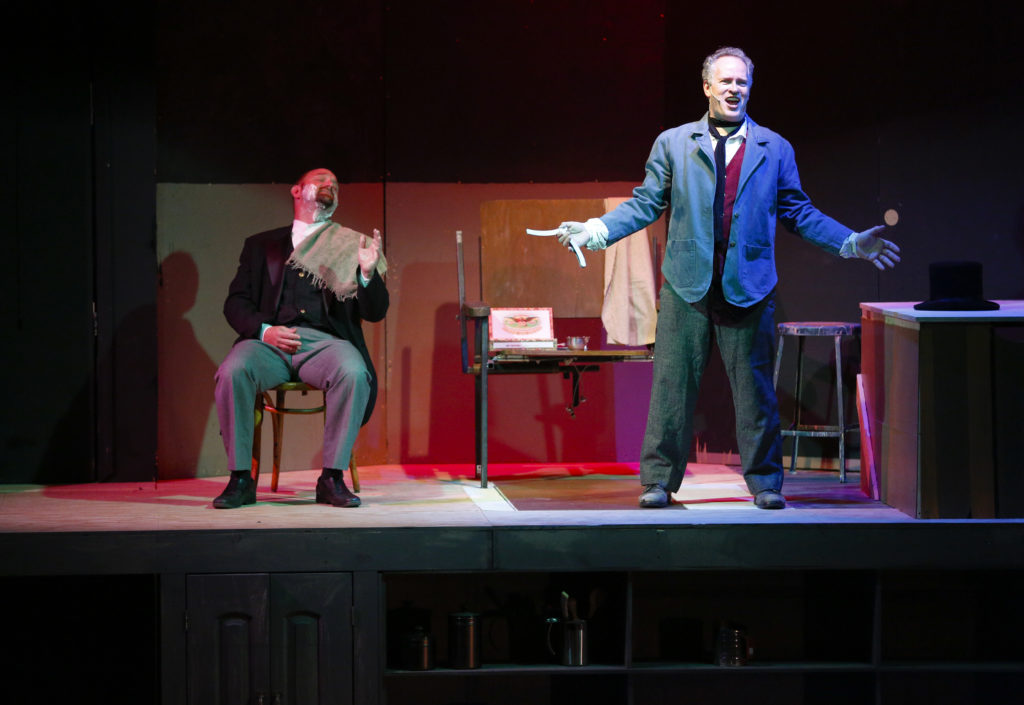 Sweeney Todd, played by Mark Rector, right, prepares to give a 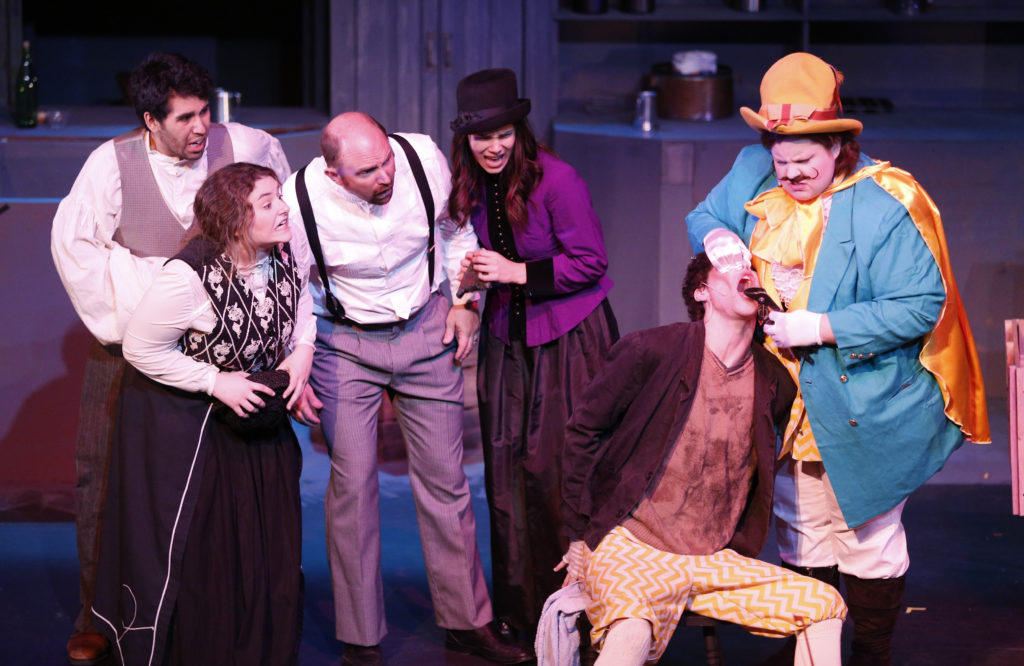 Pirelli, played by Amelia Rollings, performs a tooth extraction on Tobias, played by Jacob Leet, before a crowd of spectators in a contest with Sweeney Todd, during a dress rehearsal for Sweeney Todd: The Demon Barber of Fleet Street, Tuesday, Oct. 22, 2013 at the Lawrence Arts Center. Nick Krug/Journal-World Photo

Ric Averill has been thinking a lot about heritage recently. The longtime performing arts artistic director at the Lawrence Arts Center draws back the curtain on his latest project Friday, “Sweeney Todd: The Demon Barber of Fleet Street.”

“There was a very specific reason to do this the year after (we did) ‘The Threepenny Opera’,” he says, referencing last season’s production of the Bertolt Brecht classic. “It’s very Brechtian. The chorus tells what they’re going to tell us, they comment on the action, and then, at the end, they tell us what they’ve told us.”

Acknowledging Brecht as one of the influences for the 1979 Stephen Sondheim musical, Averill dug into the heritage of “Sweeney Todd” itself. The principal character is fictional, but it’s based on a 19th urban legend — that of a revenge-obsessed barber who slits his customers’ throats when he shaves them. That led him to an exploration of Grand-Guignol theater.

“Le Théâtre du Grand-Guignol was a unique venue founded in Paris in 1894 in a vacant chapel,” Averill says. “It specialized in horror shows, and it was known for its special effects.”

The bloodier and more horrific, the better was the way of thinking. Sondheim became fascinated with the Grand-Guignol style and infused it into his telling of the story, which was based on a script by Christopher Bond. In keeping with that idea of heritage, Averill is incorporating the macabre, visceral style into his production.

But if he intends for the presentation of the show to capture the horrific nature of Grand-Guignol style, Averill isn’t interested in gratuitous violence for the sake of titillation.

“If I were ever to direct a film, I wouldn’t want to do a horror movie, especially a slasher film,” he says. “I really don’t like that sort of thing.”

But he thinks, done right, horror has the potential to teach us important things.

“Even though we all don’t murder people, we do in our minds,” he says. “We need to think about that.”

Of course, this isn’t just a horror show. It’s a complex musical crafted by one of the most influential composers on Broadway. How does one balance the viscera with the beauty and the difficulty of the music?

“First you get really talented musicians,” music director Patricia Ahearn says. “Our actors, there’s not a weak link in the bunch.” 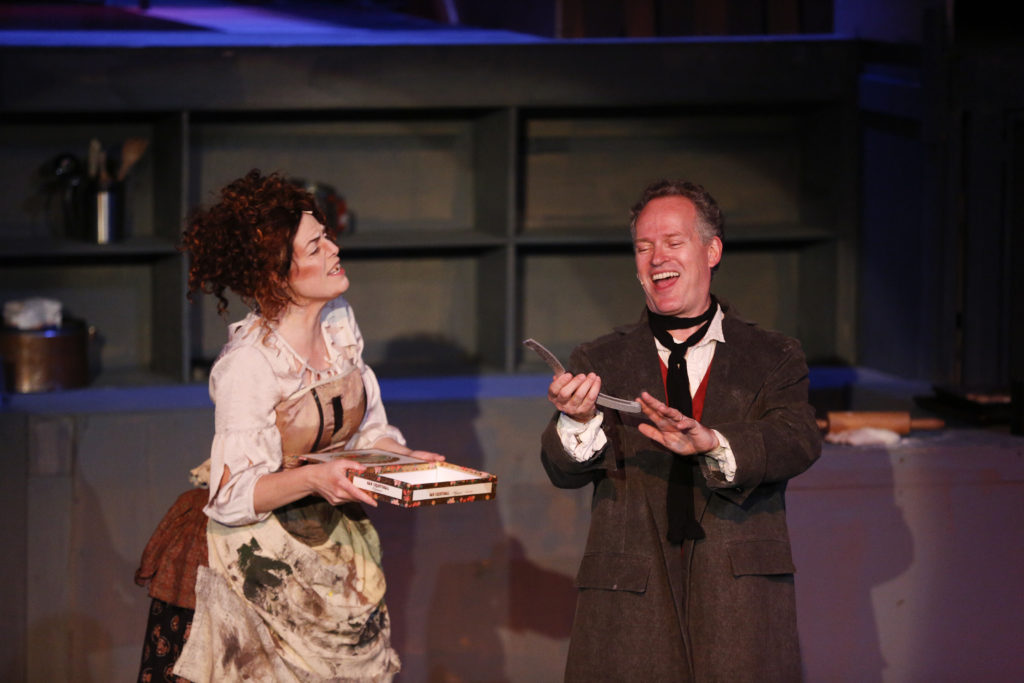 Sweeney Todd, played by Mark Rector, is reacquainted with his straight razors as saved for him by Mrs. Lovett, played by Jill Anderson, during a dress rehearsal for Sweeney Todd: The Demon Barber of Fleet Street, Tuesday, Oct. 22, 2013 at the Lawrence Arts Center. Nick Krug/Journal-World Photo

Indeed, virtually every one of the performers in the cast is a classically trained singer.

Mark Rector is playing the titular Sweeney Todd. He earned his degree at KU and as a student played Sweeney years ago under the direction of Theatre Professor Emeritus Jack Wright.

The cast also features Omaha native Jill Anderson as Sweeney’s accomplice, Mrs. Lovett, and Washburn University opera professor Sylvia Stoner as the Beggar Woman. The rest of the cast is composed of a mix of local performers and KU students.

“Some of them have just graduated, and this is their first professional production,” Averill says.

“Ric and I had really high expectations,” Ahearn adds. “It was a condensed rehearsal schedule, and they had to basically come in off-book. I didn’t have time to plunk notes.”

Both agree that “Sweeney Todd” is Sondheim’s most operatic musical.

And there’s that sense of heritage again. Sondheim was influenced by classical composers and by Grand-Guignol theater style. Averill is trying to celebrate that — by producing the show a year after doing Brecht’s most famous musical, by infusing it with Grand-Guignol sensibilities, and by casting a leading man who can reprise the role he played here in college — in grand fashion.

“After really reading it and studying it and thinking about the heritage of it, I really wanted to show the horror of the Demon Barber of Fleet Street,” he says.

“Sweeney Todd” opens Friday at the Lawrence Arts Center and runs Saturday, Sunday, Halloween night, and Nov. 1 and 2. Curtain is at 7:30 p.m. with two exceptions. The Sunday performance is at 3 p.m., and the Oct. 31 one begins at 9.