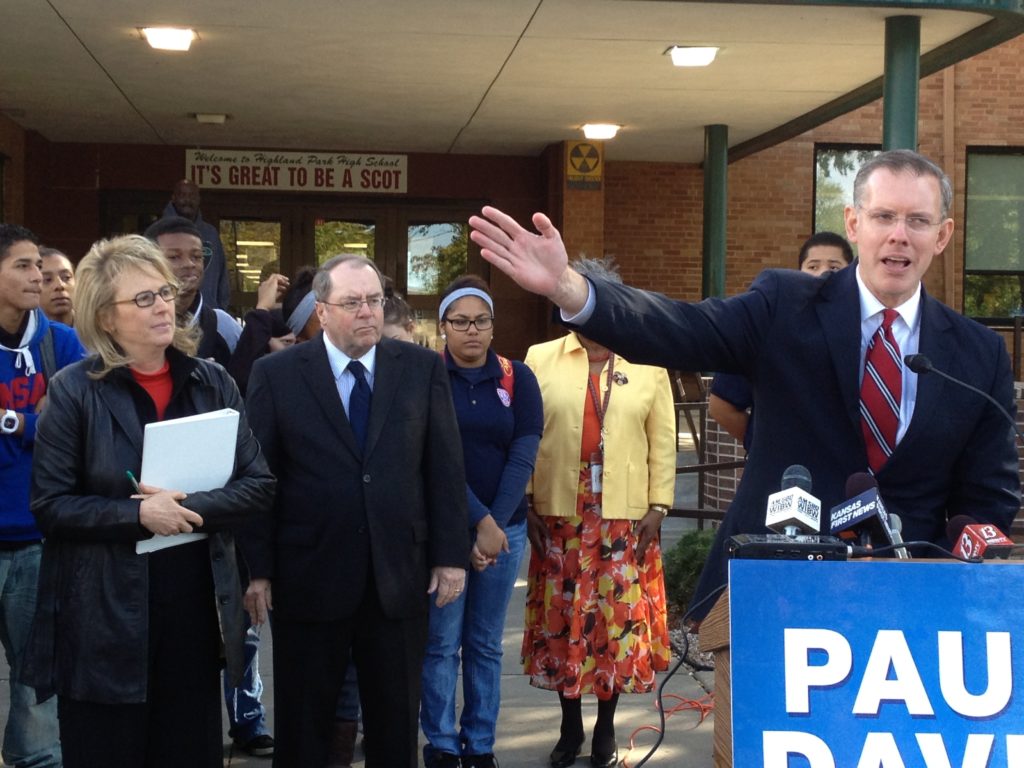 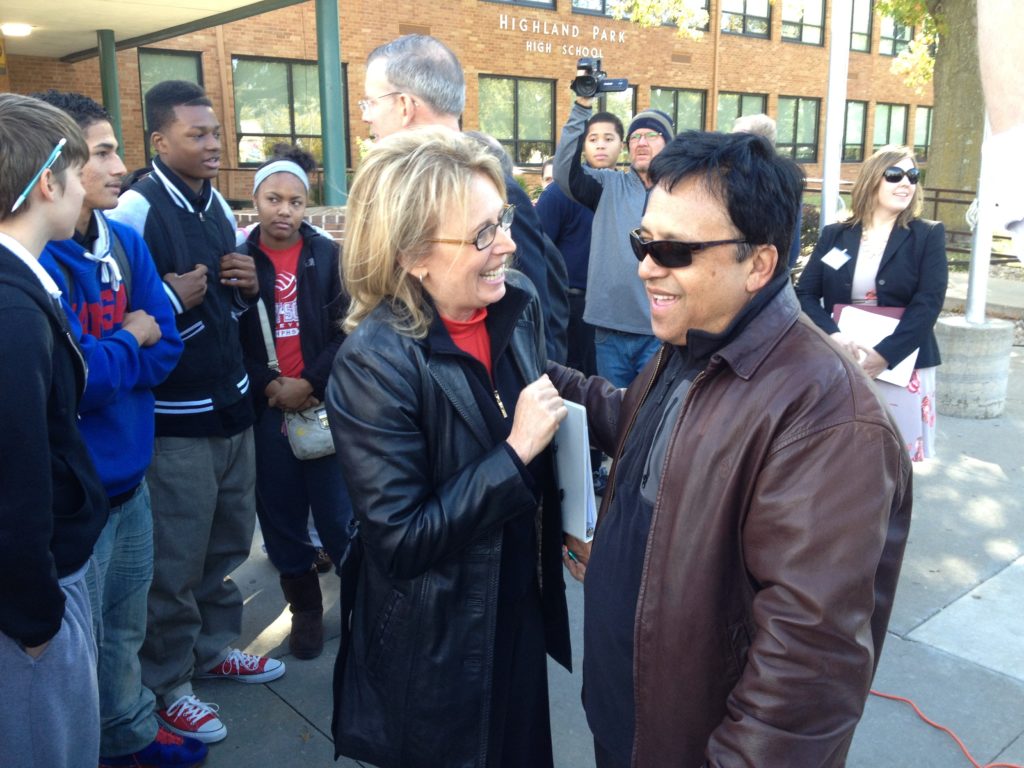 Jill Docking, a Democrat from Wichita, talks to a well-wisher after Tuesday's announcement that she will run for lieutenant governor. 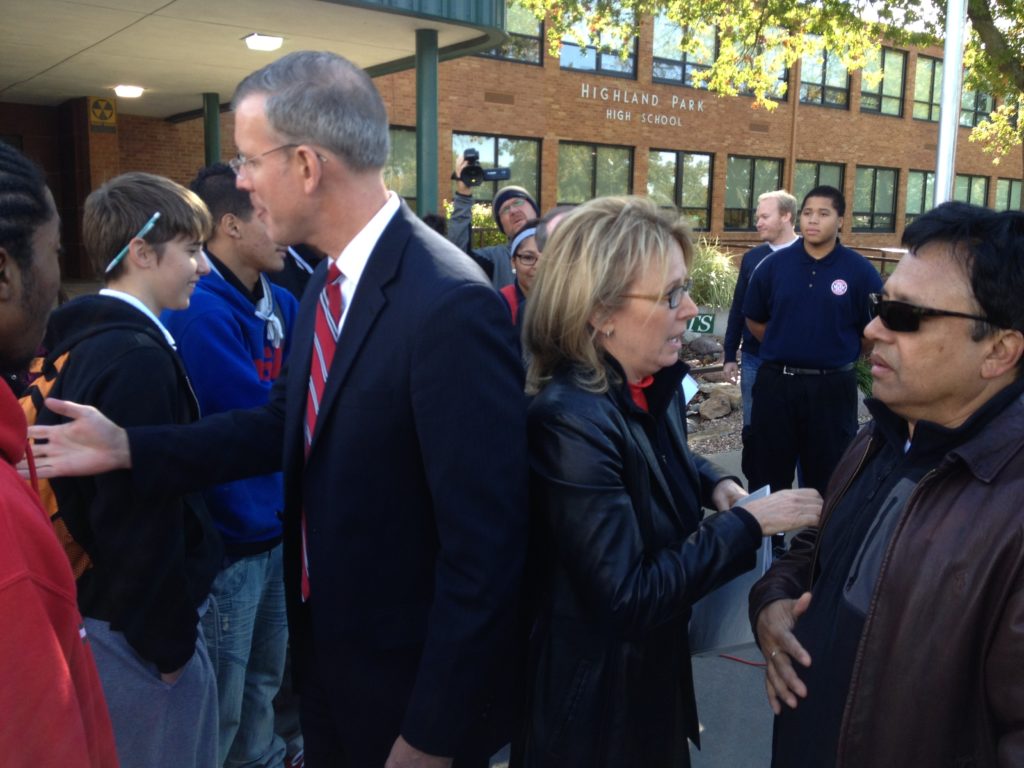 Democrats Paul Davis and Jill Docking work back to back after a campaign event in Topeka. Davis, who is running for governor, named Docking to be his running mate.

The selection sets up a rematch of sorts: Docking ran unsuccessfully against Brownback in 1996 for the U.S. Senate.

And the presence of Docking on a statewide ballot in 2014 puts the famous Kansas political name again before voters. Docking is married to former Lt. Gov. Tom Docking, who served from 1983-1987. Tom Docking’s father, Robert, and grandfather, George, both served as governor in the 1950s, 1960s and 1970s.

Jill Docking, 57, a financial adviser, has served as chair of the Kansas Board of Regents and writes a blog about politics in which she has criticized budget cuts to education under Brownback.

“As a businesswoman, Jill is an expert in making wise investments for the future,” said Davis, the House minority leader from Lawrence. “As a former chair of the Kansas Board of Regents, she shares my commitment to excellence in our schools. Jill is an outstanding addition to this team and together we will run a strong, Kansas-focused campaign.”

Docking described Davis as “a moderate, commonsense leader willing to sit down and reason with anyone to solve problems and get Kansas back on the right track.”

Davis, 41, announced Docking as his running mate on a school bus tour with stops in Prairie Village, Topeka, Salina and Wichita.

They said they traveled by school bus to emphasize that public education will be the cornerstone of their campaign. Davis said Kansans have a “moral commitment” to education funding. “It runs in our blood as Kansans,” he said.

In response to the Docking announcement, the Kansas Republican Party sought to link Davis and Docking to President Barack Obama.

“It is hardly believable — they are doubling down on the Obama agenda,” said State GOP Chair Kelly Arnold. “A substantial majority of Kansans have rejected the Obama agenda — twice. With this selection, Kansas Democrats are clearly going back to the past,” Arnold said.

As far as the allure of the Docking name, Arnold said, “No Docking has won a Kansas election in over 30 years.”

For instance, Davis said cuts to higher education signed into law by Brownback “didn’t need to happen” and caused a part of the tuition increases this year.

Brownback has said he approved the higher education cuts because that is what Republican legislative leaders wanted, and he has said he will support restoring those lost funds in the next legislative session.

The selection of Docking as candidate for lieutenant governor brings a well-known Democrat from a different part of the state. Davis and Docking are hoping also to draw moderate Republicans and independents.

In the 1996 Senate race, Brownback defeated Docking, 53.9 percent to 43.3 percent after an intense campaign for the seat that was vacated by Bob Dole, who was running for president.

Asked if she learned anything from that race, Docking said, “That was a long time ago. We are going to look forward as to where we’re going next, and what is going to happen to Kansas in the next five or 10 years.”