Danira Flores stood in front of her class at Free State High School recently, delivering a lesson in trigonometry. But it took only a moment for outside observers to notice a few things out of the ordinary. 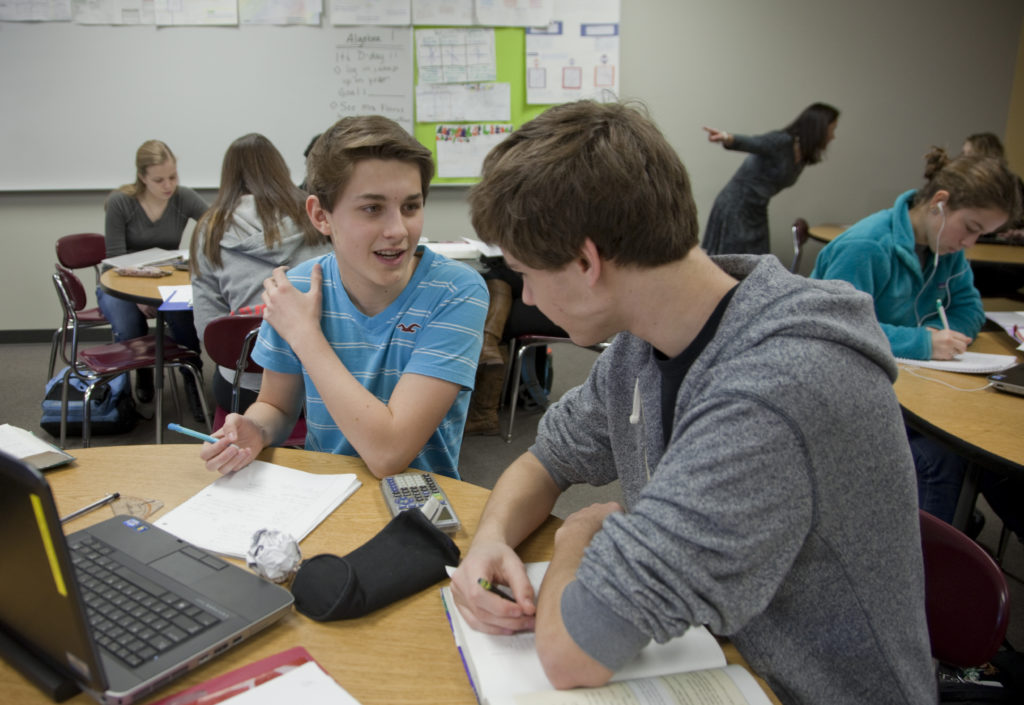 Free State high school sophomores Florian Eichblatt, left, and Zach Batterman work through some precalculus problems using both textbooks and online materials. The blending of online materials and classroom management with traditional teacher-led classroom instruction is a new model for learning that is being tested in several schools in the Lawrence district.

Most notable was the fact that only a handful of the 20 or so students in her room were watching her or paying any attention.

As a stereo was humming rhythmic salsa music in low volume, most other students were off in other areas of the classroom, reading by themselves or huddled in small groups around computers and talking among themselves.

A few textbooks could be seen on desks and tables, but almost none of them were being used.

In other times, and in other classrooms, that kind of situation would have brought a stern command from the teacher for everyone to straighten up and focus.

Not so in Flores’ class. For her, and for other teachers working to shape a new model of 21st century learning in Lawrence, that kind of setting is not only normal, it’s expected.

“I love coming to work,” she said when asked how the new method is working. “It re-energizes you.”

Flores is one of several teachers in the Lawrence school district taking part in a field test of a relatively new learning model called a “blended classroom” — so named because it blends traditional teacher-led instruction with individualized online activities that students can work on at their own pace, from anywhere they can get an Internet connection

The idea has been evolving since the advent of the Internet and “distance learning” in some schools, but it is now taking shape as a model that can benefit all students in all kinds of settings.

So far, Flores says, her students are adapting to it well.

“Last semester, I’m teaching classes that feel like it’s painful, like I’m subjecting them to painful material,” she said. “And now you look at them, they’re more relaxed because I’ve created it more self-paced and I’m allowing kids to reach mastery at their level. I’m not moving forward at warp speed. I’m just there to help support them and answer questions as they come up. I’ve got some kids wrapping up systems of linear equations, and others just running away with odds and probability.”

The field test involves classrooms at all grade levels in seven buildings throughout the district. Administration officials provided a tour of some of those classrooms last week to Kansas University School of Education professors, as well as local news media.

Earlier this year, the district spent $10,620 to contract with Instructure, a Utah-based tech firm that produces the “Canvas” software package that lies at the core of the blended learning system.

Students log into Canvas and immediately see a daily calendar that contains all their assignments, reading material, videos, assignments, work sheets and even tests. They can print out their assignments to work on them or, in some cases, complete them directly online.

When students show up to class, depending on their level of independence, they can choose to work directly with the teacher, to work by themselves or with others in small groups.

“With the flexibility I now have,” Flores said, “I’ve got kids ahead who might take a test two days ahead from home on a Sunday. I’ve got kids going on a trip, whether it’s a basketball game or what have you – I had a student take her test in Las Vegas.”

That kind of individualized pace can be good for students, but it also presents challenges for teachers who have to manage learning activity for students at all different achievement levels.

“It can be daunting,” said Michelle Andersen, a social studies teacher at Southwest Middle School who is involved in the field test. “It’s something I’m still working on. This is new, so there are still wrinkles to iron out, but I’ve always tried to teach kids where they’re at. This is just a new way of doing it.”

Teachers said Canvas also also gives them the opportunity to move beyond traditional textbooks and bring in online learning material from a wide range of sources, many of which they can get for free.

Not far away, in Amanda Roenicke’s English class at Southwest, students gathered around computers or worked at the smart board, an electronic interactive white board that is the 21st century substitute for a chalk board, studying a William Blake poem. Roenicke said the system has given her more flexibility to bring in a wider range of learning material.

“I felt like before, I still had that option, but I didn’t have the ability to get it to kids as quickly,” Roenicke said. “Now I’m able to pull something, get it into Canvas, and kids suddenly have access to it 24 hours a day. Before, I could pull something and teach it out front to the whole class, but as soon as they left my classroom, they suddenly didn’t have access to it.”

For Lawrence to expand the blended classroom model districtwide, officials say they’ll have to overcome at least two major hurdles: funding and equity.

Because the system depends on all students having wireless access to the Canvas portal, the district will need to greatly expand its wireless broadband capacity. That’s part of the districtwide technology upgrade that is part of the upcoming $92.5 million bond proposal.

If voters approve that bond issue April 2, about $6.5 million would go for technology upgrades, including about $1.2 million to support a digital curriculum.

Meanwhile, Superintendent Rick Doll said the district is currently building plans around a “bring-your-own-device” model, meaning that the district would provide the wireless network in schools and the Canvas online system to manage material, but in most cases students would be responsible for bringing their own devices: laptops, tablets or smartphones.

The bond issue, Doll said, will not be used to buy devices, but it could free up money in other funds so the district can buy devices much like it now buys textbooks.

“It’s really a 20-year bond, and so the board didn’t feel it was wise to use 20-year money to pay for devices that might last three to five years,” Doll said. “But what will happen is that if our bond passes, we’ll be able to free up some capital outlay dollars to buy the devices.”

Teachers involved in the field test acknowledge that making blended learning accessible to all students could be a challenge.

“It’s something we’re going to have to address at some point,” said Flores, the Free State math teacher. “If I were to guess, I would say about 25 percent of my kids may not have access at home. In Algebra I, I have a few more kids that don’t have access than in my precalculus class.”