Taylor, a 2-year-old Ragdoll cat, sat on a pedestal as judge Murlene Priest looked him over at the KC Midwest Cat Club Show on Saturday. 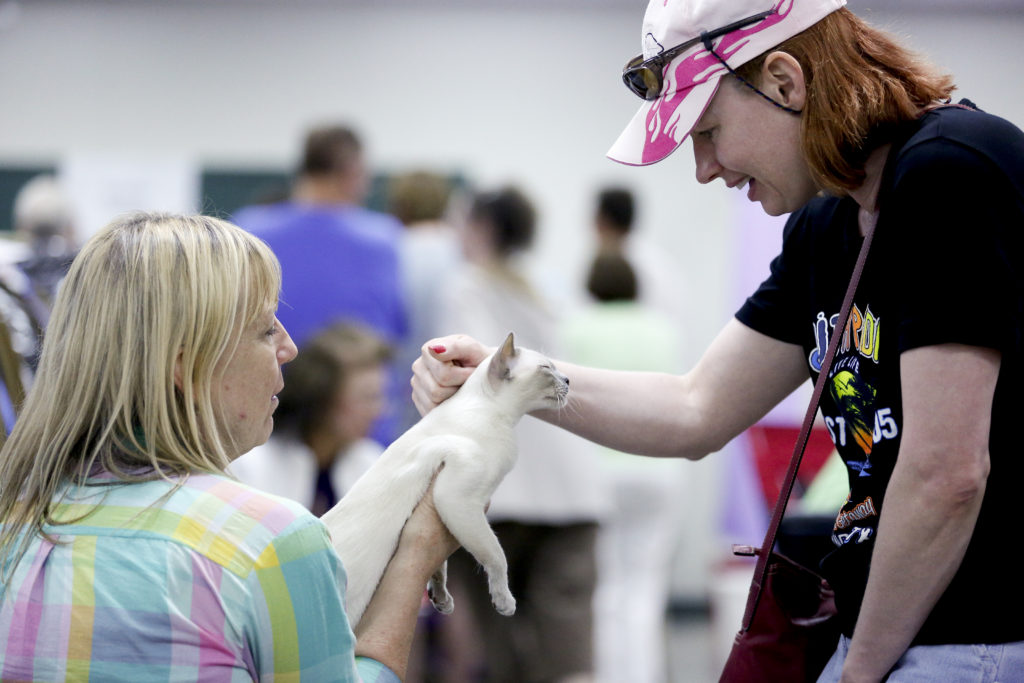 Taylor, also referred to as “Tater Tot,” received the top award in his ring for the second time that day. Owner Marlys Bartling smiled, gave him a pat and took him back to his cage to rejoin his pal Rio, an 8-year-old retired from show life.

Ninety-seven cats and their owners congregated at the Douglas County Fairgrounds on Saturday for the first day of competition. Cats are judged in four different categories: kitten, adult, altered (spayed or neutered cats) and household. Jan Rook, one of the four judges at Saturday’s show, explained that, when looking at the cats, she compares them to the ideal standard for their breed.

“For household pets, which is what I’m getting ready to judge now, there’s no standard,” Rook said. “But they have to be clean and be in good condition.”

Show manager Brian Hanson, of Wamego, said that people came from as far as Indiana, Minnesota, Wisconsin and Canada to show their cats, and 23 breeds were represented. They ranged in variety from large long-haired cats like the Maine Coon to sleek short-haired breeds like the Oriental.

But the only cat for Bartling is the Ragdoll. For the past 21 years, Bartling has shown a total of eight Ragdoll cats — known for their blue eyes, large bodies and mellow attitude — at shows throughout the region. She traveled from Iowa City, a six-hour car ride, to attend this weekend’s show.

“I try to go to at least one per month,” Bartling said. “I just love all of it, meeting new people and talking to the people I’ve known for a long time.”

Bartling didn’t intentionally join the cat show circuit. Her husband wanted a large cat, so Bartling did some research and decided to get a Ragdoll because they were “very mellow, affectionate and quiet,” she said. One of her co-workers, who had showed cats before, told Bartling that the cat was “show-worthy.”

The cat show, which is affiliated with the American Cat Fanciers Association, continues from 9 a.m. to 4 p.m. today. Admission is $5 for adults, $4 for children, seniors and military personnel and free for children under 6.